Activists call for action on gift ban bill before end of legislative session; four arrested in the process 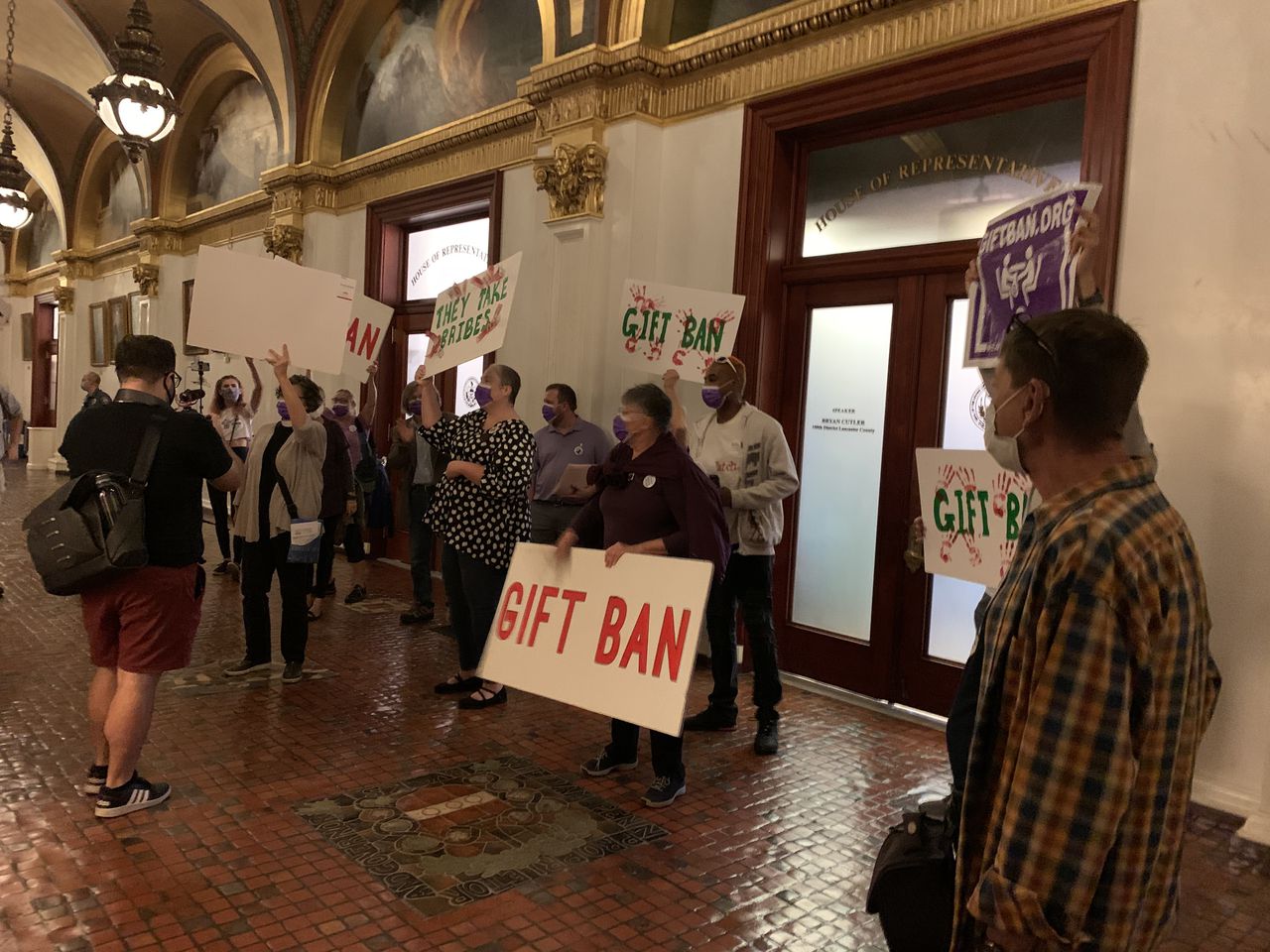 Chanting “Pass the gift ban. Do your job” and “Stop taking bribes,” about 20 activists gathered in the hallway outside the Capitol office of House Majority Leader Kerry Benninghoff on Tuesday, demanding action on a bill making it illegal for public employees and officials to accept gifts.

The representatives from MarchOnHarrisburg said they have been waiting for action for four years and came to the Capitol with four members willing to risk arrest to remind House leaders of a pre-pandemic commitment from former House Speaker Mike Turzai and then-House Majority Leader Bryan Cutler to bring up House Bill 1945 for a vote by the full chamber.

Knowing the Nov. 30 end of the legislative session is drawing near, Beth Taylor, the group’s Lehigh Valley chapter leader, said they don’t want the session to end without both chambers acting on this bill and sending it to Gov. Tom Wolf for enactment. Wolf last week held a news conference calling for the Legislature to pass a gift ban and other government reform measures.

“Millions of Pennsylvanians are suffering right now and the politicians, the legislators are allowed to take bribes,” Taylor said. “It’s unconscionable. There’s widespread support for this bill. They need to call it up. Basically, Benninghoff can be responsible for ending his colleagues’ corruption. He can bring it to a vote and take a step forward in ending corruption in the Pennsylvania state Legislature.”

The bill also carves out a number of exceptions to the so-called ban, which the group’s cofounder Rachel Anne Murphy said they will work to get changed as it goes through the legislative process.

Murphy said the group’s members have been in touch with Cutler, R-Lancaster County, who succeeded Turzai as House speaker, and Benninghoff, R-Centre County, both of whom have expressed support but that is not enough.

“We need hard evidence it is getting called to a vote and moving,” Murphy said. “We do not want the session to run out and have to re-introduce it.”

During their hallway demonstration, Rabbi Michael Pollack of Philadelphia, Carol Stowell of York, Tim Seitz-Brown of York and Reid Stever of Glenside entered Benninghoff’s office and began chanting and shouting. Capitol police and House security officers were called to escort them out. All four were issued citations for simple trespass.

Last spring, members of the group were arrested for dropping $500 from the House’s fourth-foor gallery down onto the House floor. It was after that stunt that Turzai primised the vote on the legislation.