Albertsons Cos. shoppers, gather around for this riff — About an exclusive wine advent calendar that makes a great gift 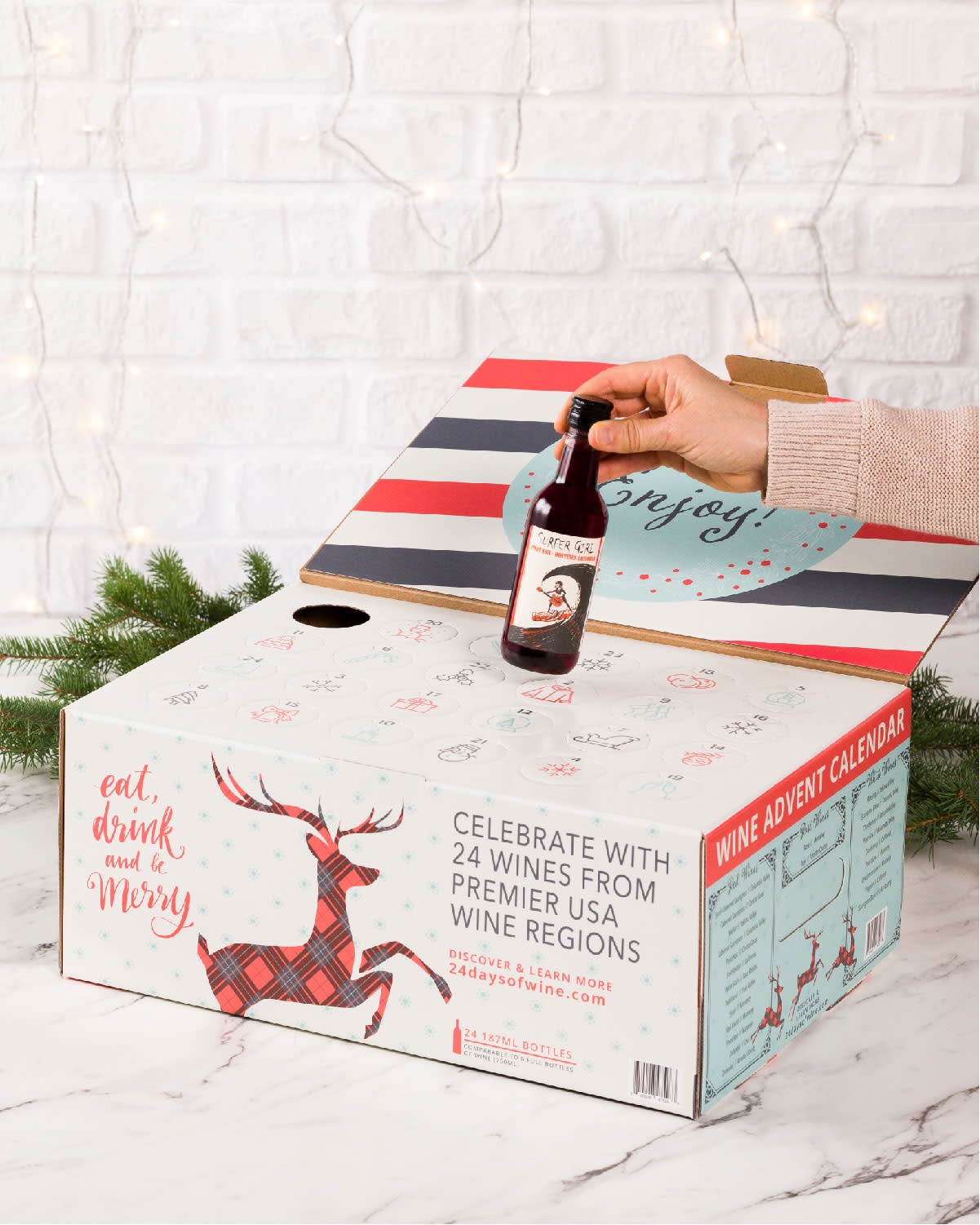 ‘Twas the months before Christmas, when all through the land,
Albertsons Cos. stepped up to lend a hand;
For the grown-ups were pent-up for far, far too long,
And wanted to end 2020 with a proper swan song.

Up at the North Pole, even Saint Nick said “Enough!”;
Quarantine at the Pole is particularly rough;
His eyes he did close, tugged the beard of his chin,
And dreamt the sweet dreams of a glass full of zin.

When all of the sudden, he awoke to the chime
Of dear Mrs. Claus’s darling face on FaceTime.
Her features were tired. Her hair all askew.
“Nick, home schooling these reindeer has just been a zoo!”

He zoomed to his desk and teamed the elves into discussion
(And frowned at the one who couldn’t find his mute button);
“We have the children covered, our gifts will bring fun;
But what of the adults, of at least age twenty-one?”

The elves went quiet, they strained and thought hard;
As the seconds passed, the silence got awkward;
Until they heard a voice, from somewhere far away,
That promised to brighten each December day.

“Let’s give them a calendar to count down the days;
Fill the dates not with meetings; rather, give them chardonnay,
And cab, and pinot, the best from western lands,”
Suggested Chad Coester, SVP of Own Brands.

“Brilliant!” Santa said. “We’ll provide them with wines!
There’s just one problem. The North Pole has no vines.”
“Don’t worry, we got this,” Chad assured with a wink,
And convened his wine team to have a long think.

They sourced from top subregions that run the gamut;
From Paso Robles to the valleys Columbia and Willamette;
So throughout December, set your worries aside;
For there are 24 mini bottles of vino inside!

There’s red, white, and rosé to end the year;
From oenophiles to beer drinkers, you’re all welcome here!
Raise a glass and gift your palate a true flavor bomb;
Find food pairings and notes at 24daysofwine.com.

Come, reader! Come, shopper! Come, deal-loving patrons!
By car, foot, or reindeer – just make it a straight run!
Dash to your local Albertsons Cos. wine aisle!
For when they are gone, they won’t be back for a while!

About Albertsons Companies
Locally great and nationally strong, Albertsons Companies (NYSE: ACI) is one of the largest food and drug retailers in the United States. Albertsons Cos. operates stores across 34 states and the District of Columbia under 20 well-known banners including Albertsons, Safeway, Vons, Jewel-Osco, Shaw’s, Acme, Tom Thumb, Randalls, United Supermarkets, Pavilions, Star Market, Haggen, and Carrs. Albertsons Cos. is committed to helping people across the country live better lives by making a meaningful difference, neighborhood by neighborhood. In 2019 alone, along with the Albertsons Companies Foundation, the Company gave nearly $225 million in food and financial support. These efforts helped millions of people in the areas of hunger relief, education, cancer research and treatment, programs for people with disabilities and veterans outreach.