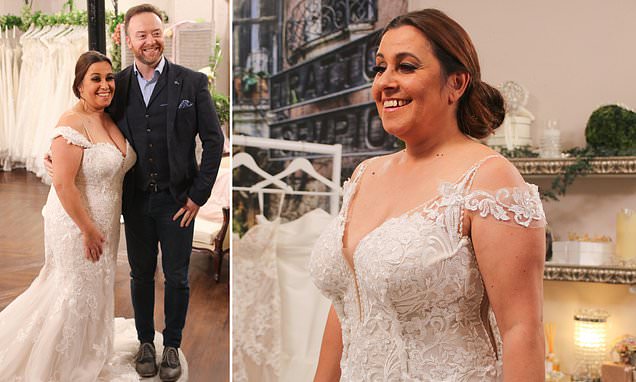 And it’s not long before tensions arise among the bridal party, with Steve disagreeing with Lisa and her daughter over what style she should choose.

The couple explain Steve’s presence, saying they feel they’ve already had their fair share of bad luck, with Lisa having fought off life-threatening meningitis.

‘And who are you…?’ Gok asks, trying to make a connection between the two. ‘I am the groom,’ Steve smiles, as a shocked Gok’s eyes widen!

‘You’re the groom!? What are you doing here, get out immediately!’ Gok jokes.

Explaining her decision to bring her fiancé with her, Lisa reveals that Steve’s constant support over a difficult couple of months influenced her thinking.

She tells Gok: ‘I know they say it’s bad luck for the groom to see the wedding dress before the wedding, but I think we’ve had our run of bad luck so we’re just embracing everything and we want to do this together.’

Lisa explains:’We’ve been through a lot together and I really wanted him to share in this journey.’

She admits that it’s unusual for a groom to help their future wife pick out a dress, but self-confessed fashionista Steve thinks he’s up for the challenge.

After Lisa briefs Gok on what she’s after – an elegant, off-the-shoulder bohemian style gown – Steve voices his own opinion, suggesting Lisa wears something more fitted and figure-hugging. And with Lisa struggling with body confidence issues, Gok has a real challenge on his hands in finding something that will keep this lovely bride, and her charming husband-to-be, happy.

Upstairs, Gok quizzes Lisa on why she struggles with her body confidence. In a shocking revelation, Lisa reveals that she’s put on three-stone since having to retire as a PE teacher due to the health reasons, after being struck down with life-threatening meningitis.

‘They said, “Say goodbye to your children, you won’t be here tomorrow,”‘ an emotional Lisa recalls, going onto explain how Steve’s love and support saw her through to the other side of her illness.

‘The thought of leaving everybody just filled me with dread, but Steven was absolutely amazing. He took everything on and was my absolute rock.’

Having made a miraculous recovery, Lisa is ready grab her second chance at life with both hands, sharing it with the man of her dreams and their family.

With the pressure mounting for him to deliver on Lisa’s dream dress, Gok starts her off with a flowy, boho-style dress with a plunging neckline.

Unsure to begin with, Lisa’s entourage, including Steve, are all smiles when she walks out in front of them.

But straight-talking Maddie puts a spanner in the works almost immediately. ‘I think it’s too plain for you,’ she says. ‘It basically looks like a white sheet.’

Changing tack, Gok suggests trying on a dress with a fuller skirt to help bring Lisa’s curves into proportion.

Back upstairs, Gok presents Lisa with a beautiful, sparkly gown with a full skirt. Unlike with dress number one, an excited Lisa can’t contain herself as she puts it on. ‘I love it, I love how it looks off the hanger and I’m quite excited to actually put this one on,’ she says gleefully.

And Lisa’s excitement only increases she sees herself wearing it. ‘Never in my wildest dreams did I think I would actually look this good! I do feel more like a bride in dress number two.’

With Lisa’s confidence growing, she walks downstairs to show off the dress to her entourage.

Seeing his soon-to-be bride in front of him, fashion-savvy Steve voices his opinion. ‘The top looks incredible, but the fact that the top then blends in with the detail of the bottom is just fantastic. I really do love this dress,’ he smiles!

But once again, Maddie’s not quite sure the dress lives up to her mum’s high standards. ‘It looks really pretty, but I don’t think it’s perfect.’ With the tension rising, Gok whisks Lisa back upstairs.

If it’s perfect they’re after than it’s perfection they’ll get Gok declares, as he shows Lisa dress number three: a glamorous, fitted frock with off-the-shoulder sleeves.

For Lisa, it’s third times the charm. ‘I look really good, the figure and everything is lovely! This could be the dress!’ Smiling from ear-to-ear, Lisa is all sophistication and elegant walking back downstairs.

This time, Steve, Lucy and Maddie are all in tears of joy! ‘As soon as I saw her, I was like ‘she’s walking down the aisle in that, that’s her dress,’ she says, getting up to hug her mum.

And for Steve, there’s not much else to say. ‘I’m blown away,’ he grins tearfully. Putting to bed the difficulties of the past few years, Lisa – and Steve – say yes to the dress!