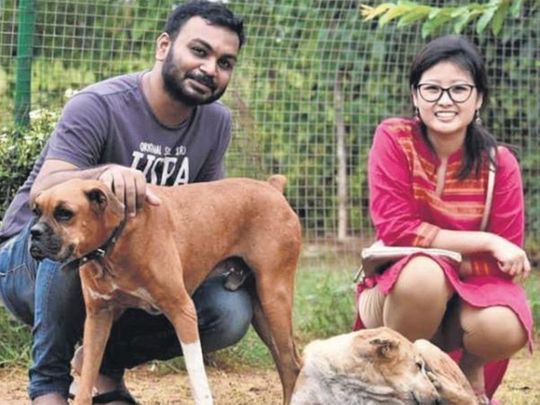 Recently, a couple in the Indian state of Odisha decided to have a unique wedding celebration. Instead of hosting a feast for friends and family, they arranged a special treat for nearly 500 stray animals to celebrate their big day. Social media users in India shared an October 11 news report, congratulating the couple.

Ever since Eureka Apta, a pilot-turned-filmmaker, and Joana, a dentist, started dating three years ago, they both discussed how to make their wedding special. The couple started saving money to donate for a charitable cause.

Earlier this year, the couple happened to visit an animal shelter, where the sight of disabled and abandoned hybrid animals moved 27-year-old Apta. He said: “Early this year, we rescued a dog which had met with an accident. That’s when we had first visited the shelter. And, the sight of helpless animals, some with injured or wounded limbs, made us feel miserable. It was then that we decided why not donate for animals instead of choosing other forms of charity.”

However, when COVID-19 hit earlier this year, Apta, who had filmed various documentaries on rural Odisha and Jharkhand, had to stop shooting and lost some of his projects.

But, this did not stop the determined couple. The two took a loan from a bank to keep their promise and donate money to the Animal Welfare Trust Ekamra (AWTE), a voluntary animal welfare organisation.

Apta and Joana’s wedding was a low-key affair. “Joana even wore my mother’s wedding saree instead of splurging on a super-expensive one,” he told the news media outlet.

“We wanted to pay tribute to my mother, who died of cancer,” said Apta.

Two days before their marriage, they visited the shelter and distributed food items and medicines to animals.

On September 25, while they were taking their marriage vows at a tiny village temple in Nuagaon, volunteers of AWTE served bowls of delicious rice and protein to stray animals in every nook and corner of the city, The New Indian Express report said.

The couple also vowed to help the animal shelter flourish in the future, as one of their wedding vows.