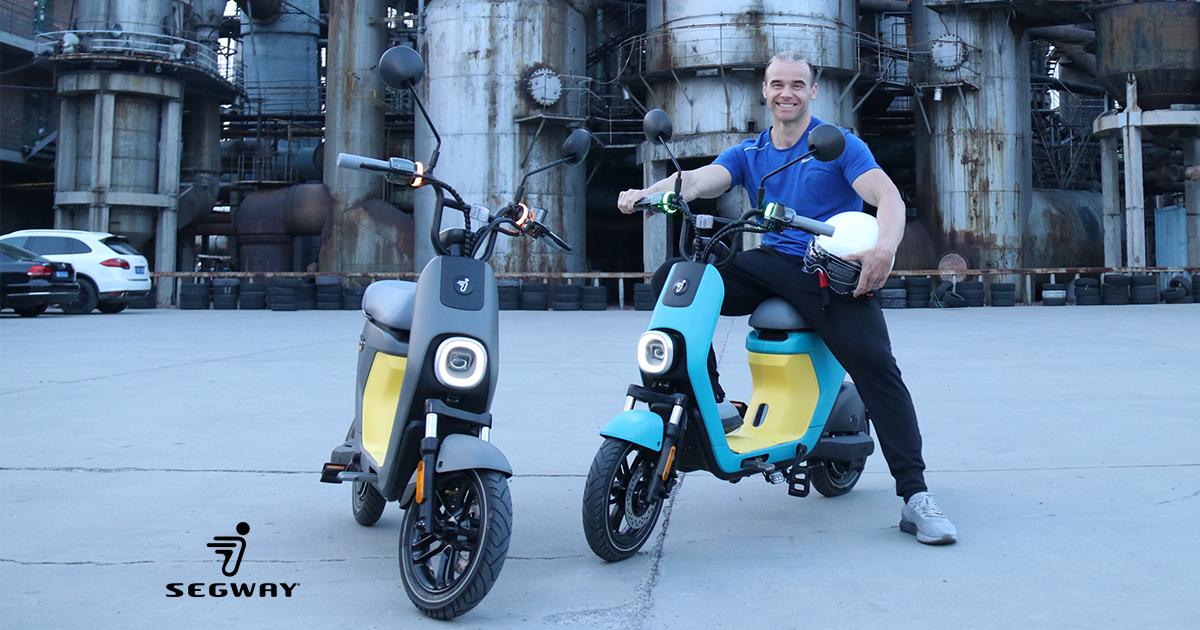 At the end of last year, Segway gave us a glimpse of a few of its upcoming urban mobility electric two-wheelers, including an eMoped. Now the company has put that C80 model up for pre-order on Indiegogo.

The C80 has the look of a basic sit-on scooter but rocks pedals so is also an ebike, with Segway saying that riders won’t require a license to use it in most US states.

The eMoped is powered by a 750-W motor for a top speed of 20 mph (32 km/h) via the twist-grip throttle, with an auto cruise feature available that will maintain a selected speed at the push of a button. Each grip ends in an LED indicator for at-a-glance, color-coded status verification. Ride information such as speed and remaining charge are displayed on an LED dash in the middle of the handlebars. And a removable 48-V, 24-Ah, 1,152-Wh Li-ion battery housed under the seat offers a per charge range of up to 52.8 miles (85 km).

Stopping power comes from disc braking to the front and drum brakes at the rear, with regenerative braking also available to trickle some energy back to the batteries when slowing down.

Some of the bumps along the way get smoothed out by front fork and mid-spring suspension, and the LED headlight rocks inner and outer ring lights, with an ambient light sensor powering the unit on when daylight starts to fade. There’s a small cargo rack to the rear too.

Segway has included something it’s calling the RideyGo! system, which includes smart seat detection that will auto lock the ride a few seconds after you get off, lock/unlock the C80 by swiping an NFC tag above the dash, and unlock the vehicle using a companion app running on a smartphone.

Any irregular movement of a parked C80 will result in a notification being sent to the user’s phone, while also triggering audio and visual alarms on the eMoped and locking its wheels after 3 to 4 seconds. But if the light-fingered opportunist still manages to move the vehicle, the mobile app can be used to track its location with the help of GPS.

The C80 is currently live on Indiegogo where pledges start at US$1,899, with the retail price expected to be $2,199. If all goes to plan, shipping is estimated to start in November. You can see the launch video below.