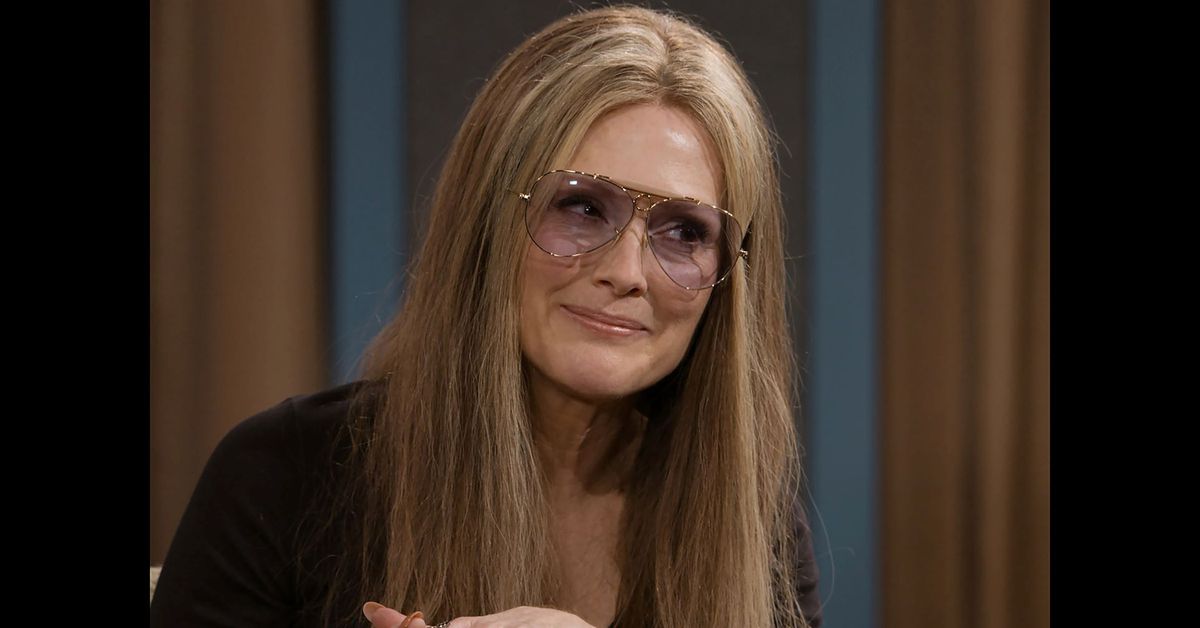 Feminist icon Gloria Steinem is on a TV talk show in the 1970s, being interviewed by a smug, leering, sexist and condescending male host, who looks her up and down and says, “That’s a pretty sexy outfit. … I hope you’ll forgive our masculine notion that you are an absolutely stunning sex object.”

When the host asks the “question,” Alicia Vikander is playing Steinem. When Gloria answers with, “This is my uniform: black jeans, black long-sleeved top, minimalist,” she’s played by Julianne Moore.


Things get ever more surreal, as the set is suddenly draped in red and orange, and Steinem emerges wearing a nun’s habit, and then we see her in a Playboy bunny outfit, and then we’re in a “Wizard of Oz” scenario complete with swirling tornado and a “witch” on a broom, and the host in his chair is lifted into the sky as four versions of Gloria Steinem surround the terrified clown and chant “Double, double, toil and trouble,” and yep, it’s safe to say “The Glorias” is an extremely stylized biopic about the life and times of one of the most influential figures of the last half-century.

The magnificently talented Julie Taymor, who won the Tony for her blazing and original stage adaptation of “The Lion King” and has directed such visually creative films as “Frida” and “Across the Universe,” has transformed Steinem’s biography “My Life on the Road” into a postmodern, pop art, time-hopping film somewhat reminiscent (though not quite as trippy) as Todd Haynes “I’m Not There,” in which six different actors portrayed different representations of Bob Dylan. In “The Glorias,” Ryan Kiera Armstrong plays Gloria as a girl growing up in Ohio; Lulu Wilson plays her as a teenager; Alicia Vikander portrays Steinem from ages 20 to 40, and Julianne Moore takes over from there. This is hardly an unconventional approach to a life-spanning biography; what’s unusual about “The Glorias” is that the various versions of Steinem often interact with one another, usually on a bus, in scenes filmed in black and white, with the outside world rolling by in bright colors. (Steinem even plays herself late in the story.)

The Metaphorical Bus device, designed to convey Steinem’s journeys geographical and political, personal and spiritual, is interesting at first but becomes wearying as it stalls a story with a running time of two hours, 19 minutes. Taymor engages and sometimes indulges in a number of stylistic touches that are undeniably arresting but ultimately draw us out of the story. It’s as if a gifted musician went overboard in the studio with audio special effects and didn’t trust the classic material. When we get a clip of Steinem as a magician’s assistant, literally having knives thrown at her, followed by a moment when a colleague says of an unflattering magazine profile, “Come on Gloria, this isn’t the first time you’ve had knives thrown at you,” the impact is more oddly comical than dramatically impactful.

In the early scenes depicting Gloria’s childhood, we learn her mother Ruth (Enid Graham) was a journalist who had to write under a male pseudonym and dealt with depression, while her father Leo (Timothy Hutton), a salesman who talked a big game but was always falling short of landing a big score, was like an extra-cheerful version of Willy Loman. Hutton pours himself into the role, but throughout the story, Leo comes across as a caricature of the outwardly happy-go-lucky, inwardly desperate, absentee dad.

“The Glorias” checks off the boxes of Steinem’s rise, from her landmark 1963 article “A Bunny’s Tale,” which chronicled her experiences going undercover at the Playboy Club, through the founding of Ms. Magazine and her lasting friendships with the admirable likes of Dorothy Pitman Hughes (Janelle Monae), Wilma Mankiller (Kimberly Guerrero) and Bella Abzug (Bette Midler, hamming it up and looking like she’s having the time of her life).

We come to understand “The Glorias” is a reference not only to the title character through the years, but to all the strong and brave and bold women she encounters on the roadway of her life. Of course, there’s so much to be admired about Gloria Steinem, who at 86 is a living legend who is still out there fighting the good fight. And there’s much to be admired about “The Glorias,” including the very different but equally powerful performances by Vikander and Moore, and the staging of some landmark moments in Steinem’s life. Alas, “The Glorias” doesn’t quite fulfill its potential, as story and character development too often take a back seat to the stylized visuals.

The top entertainment stories, features and must-read reviews, sent to you weekly.