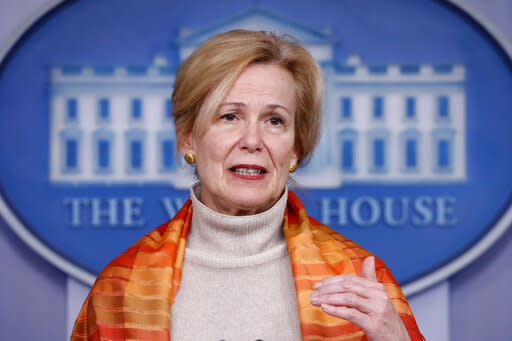 Cooler weather is leading to more indoor socializing among families and friends, which leads to people taking off their masks. It’s a move which White House coronavirus task force coordinator Dr. Deborah Birx warns is leading to “troubling signs” of an increased viral spread.

“What we’re seeing in the community is much more spread occurring in households and in social occasions, small gatherings where people have come inside, taken off their mask to eat or drink or socialize with one another,” Birx said Thursday at a roundtable discussion at the University of Connecticut in Hartford, Connecticut.

The new pattern mimics that seen in Southern states at the beginning of summer, she said, when people began heading to indoor areas to escape heat and humidity.

Birx said people relax precautions they may take in more public locations when among family and friends who appear healthy. But she noted that such people may be asymptomatic.

“What we did in the spring is not going to work in the fall,” Birx said.

Birx’s cautions comes as the U.S. reported 56,191 new coronavirus cases in the past 24 hours, according to Johns Hopkins University data Friday, the highest daily new case total in nearly two months. The seven-day average of daily new cases is now on the rise in 35 of 50 states, up from the mid-20s totals last week.

The spike has led to New York City renewing its shutdown in locations that are considered “hot spots” of new infections. Other cities are instituting similar measures in an effort to contain any spikes.

“This is the moment to really increase asymptomatic testing, increase outreach to the communities, making sure that every community member knows that if they’re with individuals outside of their household, it could be a COVID-spreading event,’ Birx said Thursday.