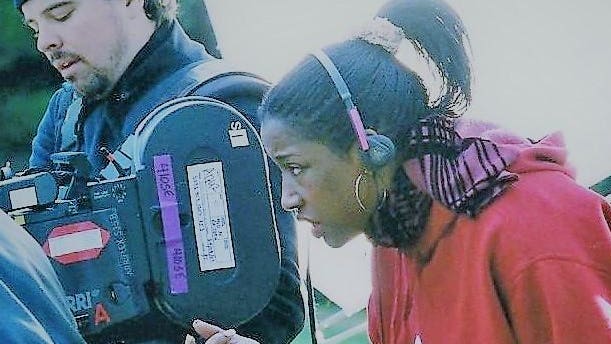 The turn of the century encouraged innovation, a new form of resilience, and a chance for the industry to begin implementing new diversity and inclusion strategies. Now celebrating its 20th anniversary, Showtime’s Soul Food the series, adapted from George Tillman’s feature film, Soul Food, broke many stereotypical barriers. Not only did the show transform the way viewers and Hollywood perceived Black families but took a progressive approach by hiring Felicia D. Henderson. She became one of the few Black female showrunners in the industry in the early 2000s.

Henderson didn’t take her role lightly. She was in power to move the pendulum forward in hiring women to fulfill the behind-the-camera positions. She made it a point to hire women who not only had experience but were up-and-coming. “I was a woman,” she states, “the show was about three women. So, where are the women directors? I was told there where none, so I went on a mission to find them and create opportunities for them. When you hire more women and people of color, we hire more women and people of color.”

Initially trained as an actress, Houston saw an opportunity to make a more significant impact behind-the-scenes as a producer, screenwriter and director. Her 1994 short film, Tuesday Morning Ride, which she wrote and directed, made her the first Black woman to be nominated for an Academy Award for Best Live Action Short Film. In 2003, Henderson hired Houston to direct an episode of Soul Food. Since then, she has gone on to direct film and television shows, including Crossing Jordan and Michael Jackson: Searching for Neverland. Their paths crossed again when Henderson became a consulting producer on Empire, where Houston was a co-executive producer and director.

“For women directors,” Houston states, “unless you come packing heat, every time is the first time again, for at least a little moment; you constantly have to prove yourself.  Coming into Soul Food, where you have Felicia Henderson and Tracey Edmonds [executive producer], you have this incredible cast and these incredible writers altogether. It’s a different environment because, for me, it was like, ‘I’m coming to a place where I can expect not to be an outsider, where I can expect to have people who have something in common with me. That is an incredibly rare situation. As a Black female director, you don’t feel your otherness so explicitly in your face every day.”

Before joining the series, Coulas had worked on a few projects as a coordinator. She had been hired as the script coordinator on Soul Food. After two years in that position, she was promoted to the writing staff. It was her first television writing gig. After the series ended, she and Henderson worked on Single Ladies together. In 2017, she teamed back up with Henderson as a supervising producer on The Quad, co-created and executive produced by Henderson.

“On Soul Food we had a mandate [from Henderson] to hire women directors and people of color,” Coulas states. “All those things that later on, people were shamed into doing. It was difficult at times to push that through and make those decisions because you might have a director you want to give an opportunity to or somebody new, and you helped them along and push that through. Sometimes it does cost money. Sometimes you have to be there on set and hold their hands, but the reward is seeing those women later on that they are in demand and booking up because of that opportunity.”

As one of the most critically acclaimed Hollywood directors, Rooney has earned her place in the industry. She has directed over 220 prime time network television shows, including Desperate Housewives, Ally McBeal and long-running American classics NCIS and Criminal Minds. In 2018, she became the producing director of the CBS drama Bull. She serves on numerous committees at the DGA, including co-chairing the Diversity Committee, and teaches the intensive Warner Brothers TV Directing Workshop.

“Women direct 25% of dramas now,” Rooney states. “Back in the Soul Food days, it was under 5%. It’s come a long way. Actors would primarily say to me, ‘you’re the first woman director I’ve ever had.’ That’s rare now. We’ve come a long way since then. We have further to go, but we’re not an oddity like we once were. I thank Felicia for having the point-of-view of hiring a woman wasn’t such a radical thing to do.”

Since Soul Food, all four of these women have gone on to have eclectic careers. They share advice for women aspiring to succeed in Hollywood:

“When you come through the door,” Henderson concludes, “you’d better do a superior job. If you don’t, the next woman might not get hired, as if one woman director represents all women directors. It’s progressing. I’ve worked with a lot of amazing women directors.”