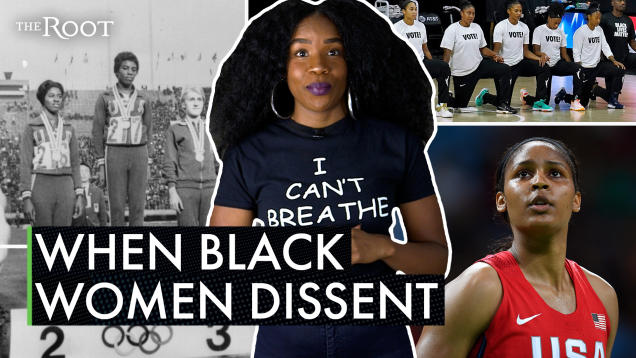 I’m an athlete and I’m a Black woman, so I want to be able to be both on the court. And I think that’s the narrative that just needs to be understood.” — Renee Montgomery, point guard, Atlanta Dream

In America, Black women are critical in the fight for justice. Full stop.

This statement remains true in various spheres of influence. But as Black women have made significant acts of protest in sports, their contributions haven’t been widely acknowledged.

Harry Edwards is professor emeritus of Sociology at UC Berkeley, and author of The Revolt of the Black Athlete. As a founder of the Olympic project for Human Rights, he was behind the Black power salute at the 1968 Summer Olympic Games.

Edwards says that the contributions of Black women as activists in sports haven’t been acknowledged because of a system of misogyny and sexism.

“The problem that we have is that in American society we have never seen women as credible and legitimate athletes.” Edwards went on,“You don’t see women getting access to that kind of exposure in terms of their ideas and dispositions on these issues, even though they’ve been there all the time.”

Indeed, Black women have been here. And we’ve been politically and socially outspoken in sports.

Little known jumper Eroseanna “Rose” Robinson, refused to stand for the national anthem during the 1959 Pan American Games. After her win at the 1960 Olympics, Wilma Rudolph insisted that her homecoming parade be integrated—this became the first racially integrated event in Clarksville, Tenn. Maya Moore, left the WNBA in 2019 to help free Jonathan Irons, a Black man who was incarcerated for a crime that he didn’t commit. Naomi Osaka donned seven black face masks with the names of seven Black people who were killed by racist violence at the 2020 U.S. Open.

Atlanta Dream point guard and 2020 The Root 100 honoree Renee Montgomery decided to sit out the 2020 WNBA season to focus on social justice issues. “The sports leagues shut down because of racism,” said Montgomery, who refuses to just shut up and play.

“I’m an athlete and I’m a Black woman, so I want to be able to be both on the court. And I think that’s the narrative that just needs to be understood.”

In this episode of Unpack That, we delve into the history of protest in sports, and why the contributions of women athletes often go unacknowledged. Watch the entire video above.