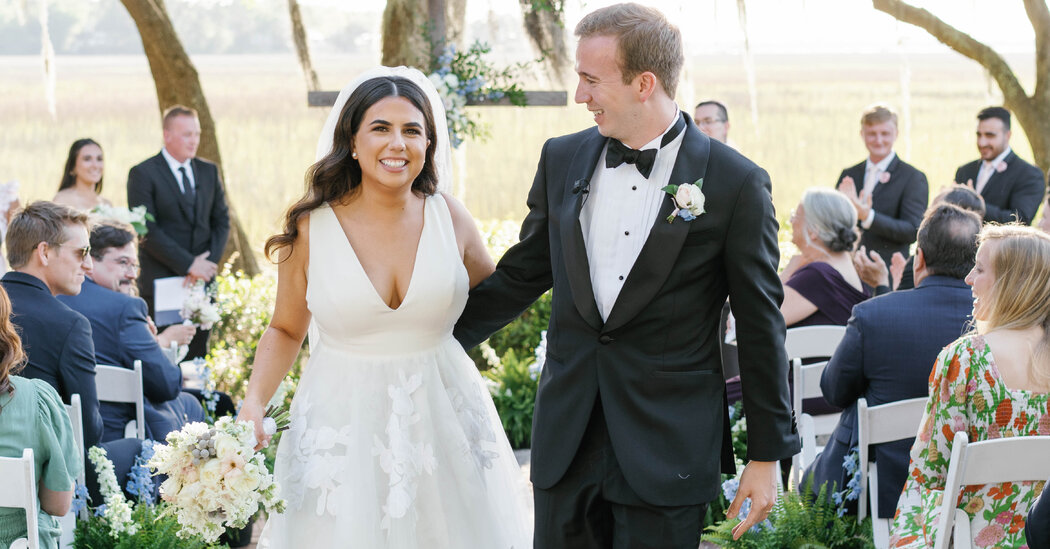 Susan Hampton Alavi and Evan Michael Schaeffer dated in fits and starts for almost a decade before settling into a steady relationship, much of which was long distance.

The two, both 25, met in 2010 on their first day as freshman at William G. Enloe High School in Raleigh, N.C., where a mutual friend introduced them during lunch. A month later, Mr. Schaeffer asked Ms. Alavi to be his girlfriend. “We were at the North Carolina State Fair, stopped on top of the Ferris wheel,” she said.

“That same night he told me that he loved me,” Ms. Alavi added, “and my 14-year-old heart was not ready for that.” She broke up with him within a week, but the two remained friends.

They got back together as seniors in 2013, after Mr. Schaeffer reworked his class schedule to better align with hers. “I dropped out of a high-level calculus to take class with Susan,” he said. When she asked him to tutor her for the math component of the S.A.T.s., “Evan happily agreed to spend extra time with me and quickly graduated from tutor to boyfriend,” Ms. Alavi said.

They remained a couple when they started college together in 2014 at North Carolina State University in Raleigh, where she would eventually earn a bachelor’s degree in communications, and he in business administration. But by that October, they had broken it off.

From then, “We would go back and forth between being friends and more,” Ms. Alavi said. In December 2017, as college seniors, they again started dating seriously, only to break up several months later, in May 2018.

Early that summer, after returning from a two-week trip to Italy and Germany, Mr. Schaeffer asked Ms. Alavi to try life as a couple one more time. By August 2018, she had agreed.

That same month, the two began graduate programs in Raleigh; she at Meredith College, where she earned a paralegal certificate, and he at North Carolina State University, where he received a master’s degree in advanced analytics.

After both finished their graduate programs in June 2019, Mr. Schaeffer moved to Atlanta, where he works as a data science consultant at a local office of Slalom, a consulting firm in Seattle. Ms. Alavi stayed in Raleigh to work at a Christian camp for children.

“Dating long distance after our graduate programs was one of the best things that happened to us,” Ms. Alavi said. “It forced us to create intentional moments and helped me truly see that I want him in my life all the time, not just when it’s convenient.”

Mr. Schaeffer proposed in November 2020, while the two were in Hilton Head, S.C. Following a stroll that ended “at this really nice resort on the island,” they walked out onto a dock “that sat on the most beautiful marshy waterway,” Ms. Alavi said. “At end of the dock, I felt him get a little shaky and immediately knew what was happening.”

In October 2021, she began to relocate to Atlanta, where she now lives with Mr. Schaffer and works remotely for her family’s business, Highland Builders in Raleigh.

The two were wed April 24 at the Creek Club at I’On in Mount Pleasant, S.C., before 99 guests, who were asked to be vaccinated. But much like their romance, the ceremony followed anything but a direct course.

Their officiant, a notary public, became ill after the ring exchange and fainted, first into the flower-adorned cross behind him and then into some bushes.

Luckily, three nurses were among the guests and rushed to his side as the group awaited an ambulance. When it arrived, the officiant was wheeled out on a stretcher to a standing ovation and, Mr. Schaeffer said, “with a smile on his face.”

Ms. Alavi’s cousin Justin House, a pastor at Oregon City Evangelical Church, said a prayer for the officiant before finishing the ceremony. The couple’s day-of wedding coordinator, Lindsay Heirs, who is also a notary, signed their marriage license.

“The wedding itself ended up to be the most fun night of our life, but only after a crazy event,” Mr. Schaeffer said. “We wish we were making this up.”

He added that they were glad to have hired a videographer to capture footage of the event. “We can’t wait to show it to our kids one day so they believe us.”