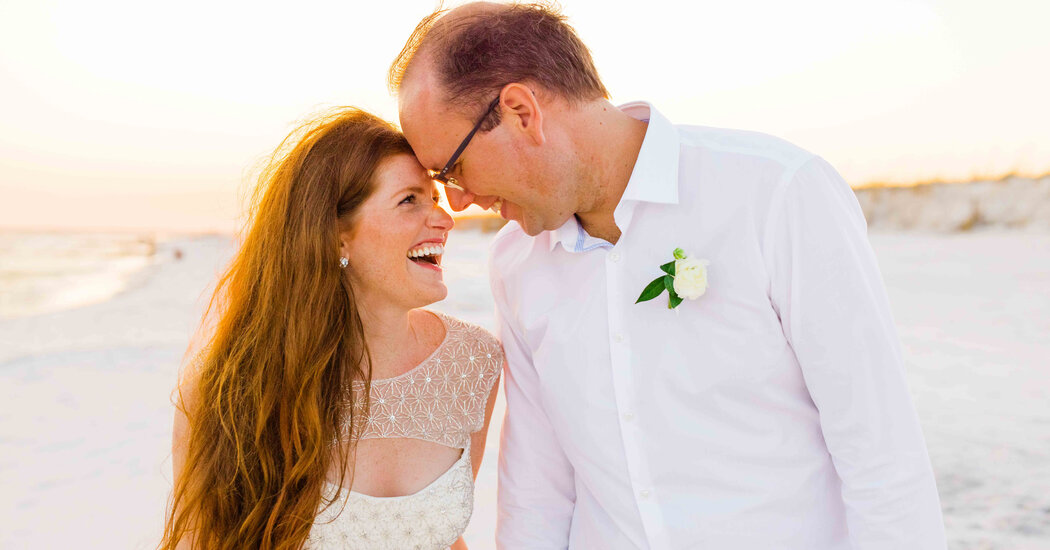 “He was really cute and sweet, and a good listener,” said Ms. Stansell, 34, who is a marketing and event specialist at Bloomberg in Manhattan. She graduated from Florida State University.

He had reached out to her on Tinder a couple of weeks earlier after being amused by her profile, which said “must accept me for my love for Domino’s thin-crust pizza.”

In June, he invited her over for dinner “to give her a taste of what we usually eat in the Netherlands,” he said, and with his maternal grandmother’s recipes made Indonesian spice meatballs, mashed potatoes with Dutch cheese sauce, a cucumber salad and ready-made stroopwafel for dessert. He soon introduced her to Pepernoten cookies, which taste like gingerbread.

A couple of weeks later she introduced him to thin-crust pizza, which he said was “nice and light.”

After she visited her parents in Pensacola, Fla., and he went to the Netherlands that summer, their relationship became serious, and after an Oct. 1 charity event she posted their first photo together on Instagram.

“I’m a little private,” said Ms. Stansell, who after the post received calls and texts from friends who had only come to know him as “the Dutchman” or “J.”

In November when her parents visited, and after their dinner out together, her mother told her he could be the one. Ms. Stansell met his mother and brother just after the new year over burgers in Williamsburg, Brooklyn, and soon Mr. van den Heiligenberg invited her to join him on a trip to the Netherlands in May for his mother’s 60th birthday celebration in Houten, just outside Utrecht.

“I showed her around in my country,” he said, and took her for a boat ride along a canal in Utrecht.

He proposed in their Manhattan apartment on Sept. 25 last year (he moved in a month earlier).

The couple traveled to Pensacola in March for their first planned ceremony there in April. They arrived with rosé frosted Pepernoten cookies, and lots of Dutch cheese, but after the pandemic forced them to call off that ceremony and then another one in Amsterdam in July, the couple stayed on in Pensacola, and are still there.

Finally, the Rev. Brandon Burus, a Methodist minister, officiated Sept. 25 on the beach near the home of her parents in Pensacola (the couple had changed the date from Sept. 18 after Hurricane Sally hit). Only her parents attended in person, with 10 family members watching via livestream.

“He is my Dutch Prince Charming,” said Ms. Stansell, who is taking her husband’s name, which she can now pronounce perfectly.