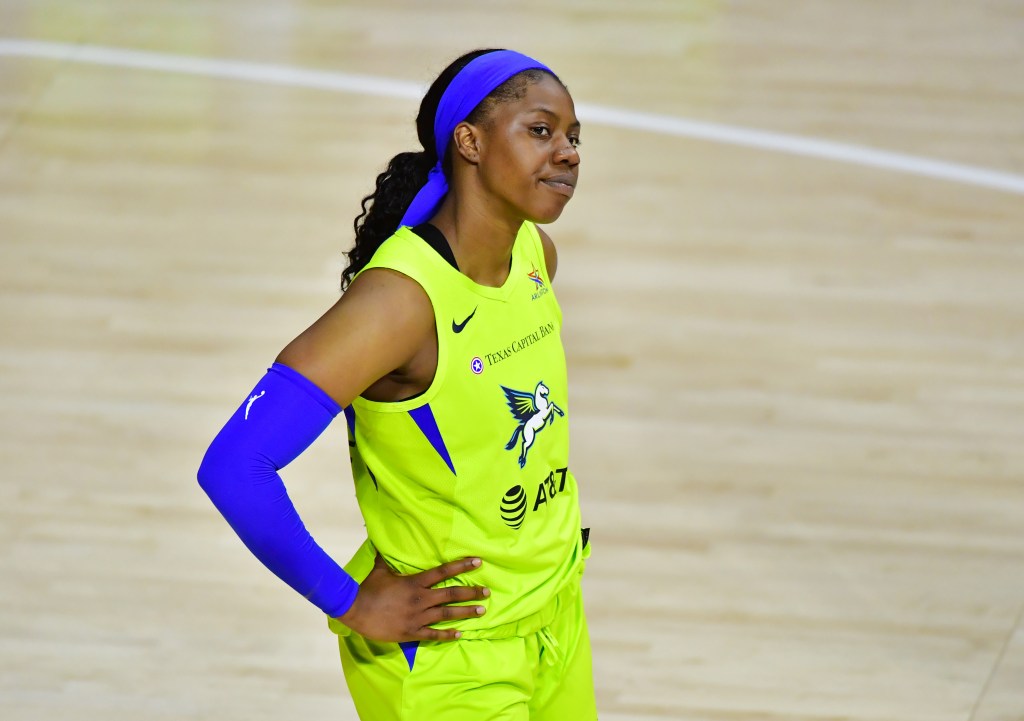 Arike Ogunbowale is one of the WNBA’s fastest rising stars. In just her second season in the league, she averaged a league-high 22.8 points on 41% shooting, 3.5 assists and 2.8 rebounds per game. In doing so, she earned the 2020 WNBA Peak Performer Award for scoring after posting the highest scoring average by a second-year player in league history.

The former Notre Dame guard took over games with ease this season, and was one of the more dependable figures on a young Dallas Wings team that was hindered by injuries this season. In 2020, Ogunbowale had 37 straight games in double-figures scoring, good for the second-longest double-digit streak in franchise history. She also had four games in which she scored at least 30 points.

As she showed this year in Bradenton, Florida, Ogunbowale is a force to be reckoned with in the WNBA. And off the court, she’s making waves too, launching her own online clothing and merchandise shop and using her voice for good. We caught up with the Ogunbowale to chat about her own style, fashion’s role in the social justice movement and the bright future of the Dallas Wings.

When did you start getting into fashion and figuring out what you liked to wear?

I would say after freshman year of college. I was always big on fashion, even when I was younger, but I wasn’t as in tune with it as before and I didn’t have as many shoes — I had a good amount, but I didn’t have as many shoes as I wanted. As I got older, I started getting into it and I watched my brother a lot because he always had a lot of shoes. So as I got to college, and my freshman year, I think I started actually learning the type of style that I want and how I want to dress.

How would you describe your style?

I think it would just be streetwear type of fits. Casual streetwear, whether it’s jeans or joggers or cargo joggers — it doesn’t matter, it’s definitely street.

Where do you get your fashion inspiration?

Social media, I follow LeagueFits and all those pages that talk about fashion. But also, when I choose a fit, I always send it to my brother. He’s like my biggest fashion person — any outfit, I send it to him first before I wear it to see if he likes it. If he says it’s good, then it’s good. I trust his opinion on everything.

When you show up to the arena before a game in a cool outfit, do you care about getting featured on LeagueFits or some page like that on social media?

No, I’m going to dress well regardless of if I make it or not [onto LeagueFits]. It’s just how I — look good, feel good, play good. That’s how I feel. When I put on a nice outfit before a game or it doesn’t even have to be a super nice outfit, it could be cozy but in my style of how I like to dress, then I feel good. And it’s always nice to feel good before you get onto the court.

Let’s talk about sneakers now. Do you have a favorite pair of kicks to play in?

To play in, I like Giannis’ a lot. They’re super comfortable.

And what about off the court? Do you have a go-to pair of shoes that you like to wear?

Jordans are always good if I’m going out or going somewhere. I’m always able to find a color that can go with different shirts or something. But if not, I’ll just go with sandals, to be honest.

I saw that you posted a photo of yourself on Instagram back in June wearing a t-shirt that says, “Protect kids, not guns.” This season, especially, in the WNBA, a lot of players have worn shirts or warm-up gear that highlights injustices in the U.S. How do you think that fashion and the clothes we wear can help promote important messages of social justice?

For sure, a lot of people — especially in the NBA and WNBA, where we have tunnels and stuff — have been wearing shirts like that. Not everyone’s going to sit down and have a conversation with reporters to get the word out so obviously, we do what we can on our platforms and social media, but this is a way to show without words what we stand for in certain situations. Whatever you support, whatever you do, it can all be said without having to say words and by incorporating it into your everyday style.

Who do you think are the most fashionable players in the WNBA?

Honestly, Sue Bird. Everybody knows that. She’s always dressed really nice so I would say Sue, for sure.

Is there anyone on the Dallas Wings that could work on their style game?

Ooo, what you tryna do?!? [Laughs] In my opinion, everybody has style in their own way, whether I like it or not. If it’s their style, then it is what it is. I’m sure some people don’t like mine either.

The Dallas Wings fell just short of the playoffs this season, despite having one of the youngest and least experienced teams in the league. Knowing that you came so close this year with this squad, how do you feel when you look at the potential future of the franchise?

We have a lot of potential. Like you said, we have a lot of young players that were on the team that were in year one or year two but we were in just about every game. We competed with every team we played and never really lost by a lot, so for us to do that while we were still figuring stuff out, didn’t even really have training camp, and as the youngest team in the league. We have a long way to go, we built chemistry this year, but I’m really excited for the future of this team.