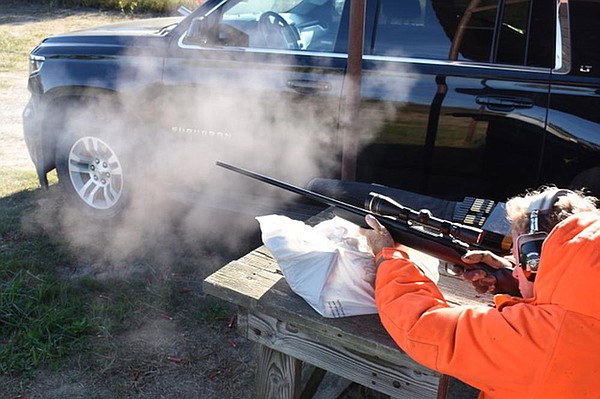 One of my muzzleloaders is a .50-caliber Thompson/Center Omega Z5 with a custom laminated Boyd’s stock and a Nikon Omega 3-9×40 scope. The primer system is a Vari-Flame II, which uses large rifle primers. The powder was Blackhorn 209.

The second muzzleloader is a .50-cal Knight KRB7 with a Trophy Banner Wide Angle 3-9X40 and a circular reticle. The powder was loose Triple Seven. The primers were Triple Seven 209.

I devoted the Thursday evening session to the Omega. I used a Range Maxx rest similar to a Lead Sled, but the bench seat is so low that I had to shoot from a half crouch.

The first three shots fired the Federal Premium Trophy Copper. These unique bullets feature a polymer tip and an integral collar/base apparatus called B.O.R. Lock MZ. The bullet is a true 50-cal. bullet, unlike most other bullets that are .45-cal. slugs that sit inside .50-cal. sabots. I used 90 grains of BH209.

The bullet missed the paper. For the next two shots I reduced the charge to 80 grains. They struck the target 4 inches to the right. The first was 1-inch high, and the second was about a half-inch under it.

I cleaned the bore, dialed the scope 16 clicks to the left and reloaded, smugly anticipating punching out the bull’s-eye. Instead, they landed all around the center ring. The Noslers did the same thing, as did the Powerbelts. I quit shooting when I ran out of primers.

The next morning I spurned the Range Maxx for the Knight and used a rolled-up towel. The first few shots were Powerbelts powered by 80 grains of Triple Seven. They peppered the center ring boundary, as did the Noslers and the Shockwaves. The Witness declared the rifle accurate enough to kill a deer and drove back to his house. That’s when I said that the deer was not dead enough.

I was even more mystified. These rifles are very accurate, and I killed a deer with each one last year. The one I shot with the Omega was about 130 yards. The rifles did not suddenly become inaccurate, nor did I suddenly become incompetent. I thought long and hard.

Using the rolled-up towel forced me to scrunch down, hunch my back and grip the stock at a downward angle, which forced me to pull the trigger upward. It also forced me to engage the scope at a weird angle. It was awkward and uncomfortable. Improper hold had to be the radical variable.

I rolled up a T-shirt, doubled it over and put it on top of the rolled-up towel. That lifted the rifle high enough for me to sit more upright and grip the stock with a parallel hold, allowing me to pull the trigger straight back. I also visualized a hunting situation. Instead of seeing a target, I envisioned a deer shoulder. I even whispered instructions to myself as I do when I’m aiming at a deer. I also increased the powder charge to 100 grains.

The first shot hit the bull’s-eye. The second shot hit beside it.

Concerned that my truck wouldn’t start, The Witness drove up to check on me. Without a sound, I showed him my target.

After I explained, The Witness got out his Weatherby and created a taller rest with a pair of boots. He put two shots through the center.

“It’s just a matter of doing it right,” I said. “We wasted a lot of time and ammo doing it wrong.”

“Yeah, but we had a lot of fun doing it, especially on a morning as pretty as this,” The Witness said. 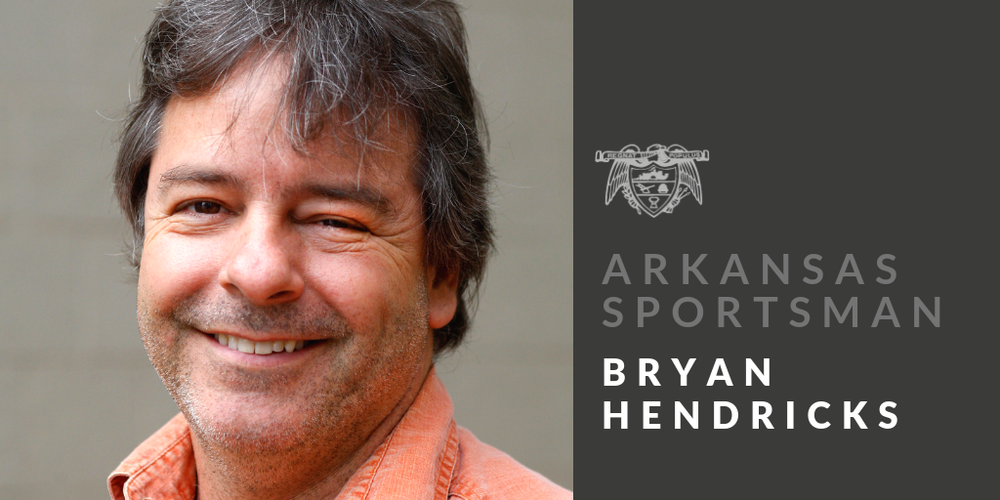