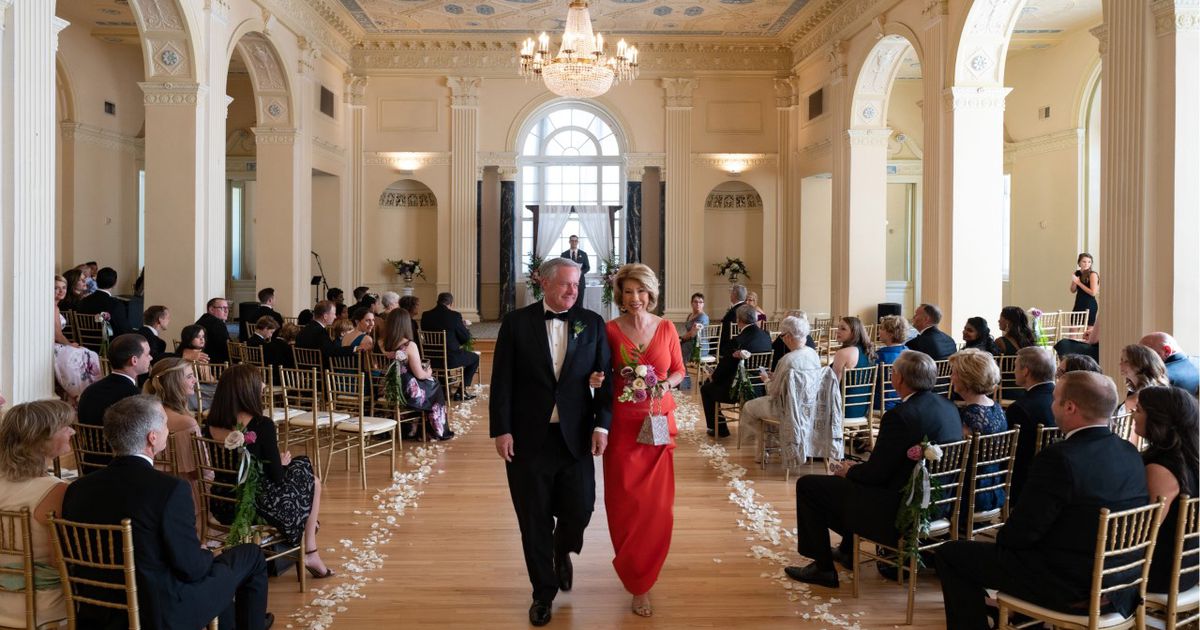 White House chief of staff Mark Meadows held a wedding for his daughter on May 31 at the Biltmore Ballrooms in Atlanta. About 70 guests attended the wedding, even though the event occurred while a statewide order was in place limiting gatherings to no more than 10 people to stem the spread of the lethal coronavirus. The celebration also lasted beyond a 9 p.m. curfew that the city of Atlanta had put in place at a time when demonstrators were gathering in the streets to protest the death of George Floyd at the hands of Minneapolis police. (AP Photo/Alex Brandon)

“It was a situation where I felt like this was the elites who were having their way,” Michael Ward said. “They do one thing and they tell us to do something else. It was that kind of feeling. They were being a bunch of liars and hypocrites.”

Ted Ward recalls arriving at the venue early thinking it was a small event — and then discovering it was for one of the most powerful men in Washington as protests were raging outside. He called it an “elitist insult.”

“It was a very large gathering, and not one person in the entire party had a mask,” he said. “I felt insulted that I was asked to be wearing a mask and others weren’t, and they were openly flaunting rules set by the administration.”

Bottoms told CNN that while she understands the need for weddings and other celebrations, she was concerned that nobody apparently wore a mask.

“It was a complete disregard of what we’ve asked people to do in our city and in our state at that time,” the mayor said.

A spokesman for Meadows has declined repeated requests for comment about the wedding on Wednesday and Thursday, aside from saying “guests were long gone” by time of the curfew.

Ted Ward, a caterer for the wedding White House chief of staff Mark Meadows held for his daughter May 31 at the Biltmore Ballrooms in Atlanta, said guests did not maintain any Covid-19 precautions despite requiring all the event staff to wear masks and gloves throughout. He called it an “elitist insult.” (Jenni Girtman for The Atlanta Journal-Constitution)

The president of Novare Events, which manages special events at the Biltmore and other venues, said Thursday that the company verified that it would be acting “lawfully and in compliance” with Kemp’s order ahead of the event.

“While we do not comment on clients’ events, we can confirm that the entire 16,000 square feet of the space was reserved for this small wedding — greatly exceeding the per-person square footage allowed by the order,” Myrna Altar said.

She did not respond to a request for comment on why the event violated the city’s curfew.

While legions of police officers and Georgia National Guard troops were stationed at Centennial Olympic Park and the Lenox Square mall — with some units firing tear gas to enforce the curfew — maskless wedding attendees dined and danced inside the ballroom.

Staffers say as the curfew took effect, they handed out dessert morsels on ceramic spoons. The bash ended, according to the itinerary, with a final rendition of “Celebration” by Kool and the Gang just before 10 p.m.

Workers at the wedding of White House chief of staff Mark Meadows’ daughter said they worried about how they would get home when the May 31 event went beyond the start of a 9 p.m. curfew in Atlanta. (AP Photo/Brynn Anderson)

Some staffers, meanwhile, nervously glanced at their smartphones as they fretted about their drives home.

“We got a text about the curfew while we were at the party,” said a third employee, who requested anonymity for fear of losing their job. “I got worried: Am I going to be in trouble because I had to blow the curfew because I was working the chief of staff’s wedding?”

After the AJC reported details of the wedding, social media was flooded by residents who shared stories of canceled family events and online-only funerals in compliance with the government’s efforts to stem the spread of the lethal disease. Many said they felt betrayed by Meadows.

“We were so absolutely heartbroken not to celebrate with our friends and family back in the spring,” said Casey Baird, who postponed a May 16 wedding in Atlanta and still hasn’t set a new date.

“The audacity and disregard that the Meadows family displayed — it just cut us to the core,” Baird added. “It’s been a rough day in this household, but the truth must always come out.”

Barrett Polan also planned his wedding for Atlanta on Memorial Day weekend. But after the pandemic began, and events across the nation were shut down, he and his fiancee decided to postpone the event.