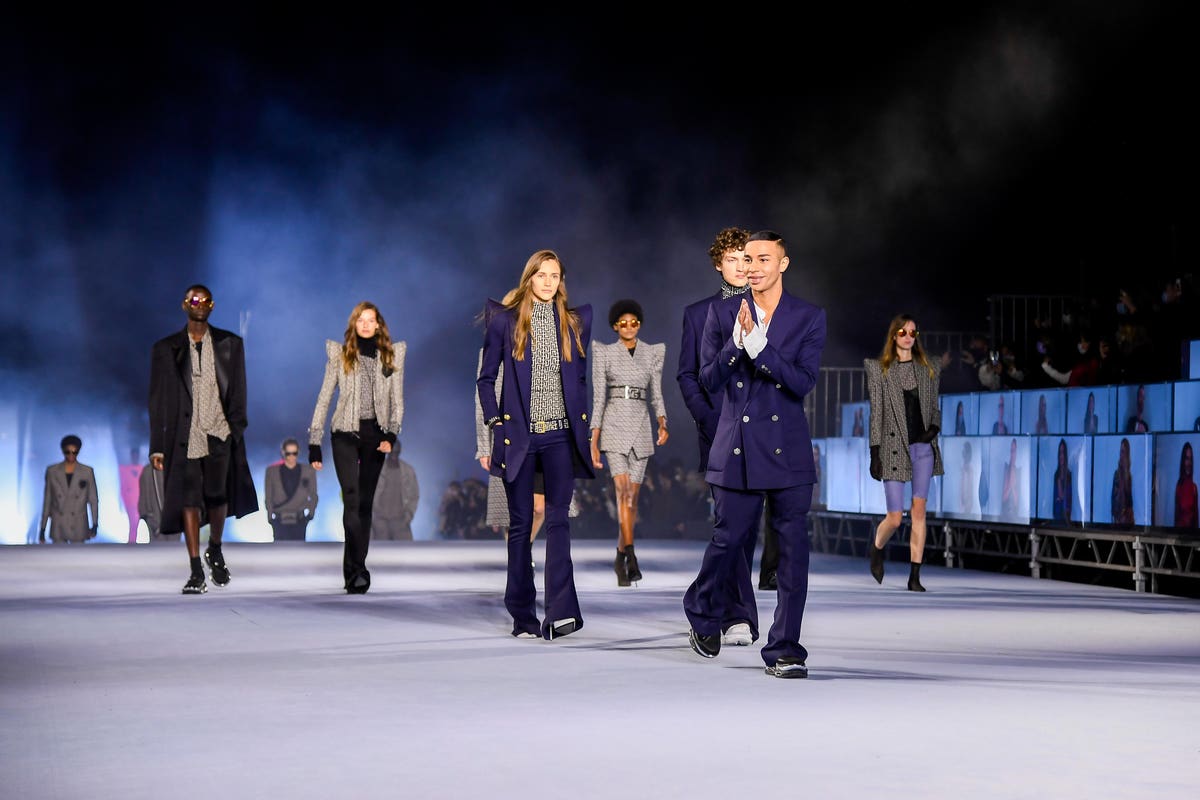 Of the four top fashion weeks, Paris has been bold in hosting twenty something live shows that are still ongoing until October 6th. Last night’s Balmain star studded show was a work of gumption, one that the House’s creative director Olivier Rousteing spearheaded during the lockdown, in very informal settings with hundreds of Zoom calls with his team to make it happen. “We were seated at our kitchen tables during conference calls,” he notes in planning the show took months in the making.

Believing that fashion should be experienced live and that shared experiences are crucial for the fashion community, Balmain put on a show that left fashion watchers feeling caught-up and that the pandemic has all been a very bad dream.

The collection was done in true Rousteing style with a tailored DB jacket that he paired with biker shorts. Knitwear pieces dominated the runway offering comfortable looks that can be turned into evening ensembles. He created pieces with strong pagoda shoulders, elongated jackets and long lean flares.

There was no shortage of sparkle as artisans embroidered two million upcycled Swarovski crystals on various pieces, including the revamped PB labyrinth pattern. Swarovski crystals is a part of the heritage and DNA of the House as its namesake founder Pierre Balmain used them for his creations.

In describing the collection Rousteing states, “overall, the spirit is cross-generational and cross-cultural, as the men’s and women’s mix of strong silhouettes, vivid fluorescent tones, and distinct treatments of our sustainable denim recall both a ‘70s Saint Germain and a ‘90s Brooklyn.”

The collection was presented in multi-part style bringing out 3 key themes of the House: heritage, community and optimism.

Getting back to the heritage of the brand and Pierre Balmain, Rousteing adapted and updated the founders’ original designs for this present generation. Opening up, Rousteing shares “we’ve recently updated and re-introduced Monsieur Balmain’s PB pattern, which was originally inspired by his fascination with the intricate labyrinths of French Renaissance gardens. Our archives are filled with ready-to-wear, accessory and couture designs from the early ‘70s that Pierre Balmain covered with variations of that motif.”

For community, Balmain has not been blind to the challenges that the world is facing. “Being forced apart taught us just how much we actually depend on being together,” shares Rousteing. “Fashion’s post-confinement efforts have made very clear that design thrives when there is constant dialogue, exchange of ideas and shared experiences—and we are all trying to find new ways to make that happen.” Partnering with LG, brought the show to life for those around the world unable to make it with 58 OLED screens.

Getting back to Balmain’s founding, Rousteing reminds us that Pierre Balmain started the House in the midst of post war Europe where there was suffering, and pain. It was optimism in which Balmain was founded and its optimism that’s in the hearts of many today during the age of Covid. “We’ve all experienced the awesome power of 2020’s solidarity, compassion and tenacity—which assures us that we can and will move through this moment and emerge stronger,” shares Rousteing.

He’s reminded of his own story as a man of color that optimism and diversity has gotten him to where he is today. “After all, it was not too long ago that someone like me was never meant to end up in the position that I occupy today. Change happens. Advancements may require determined engagement, but progress is always possible.”

American Vogue Editor-In-Chief and Artistic Director for Condé Nast Anna Wintour, Jennifer Lopez and Cindy Crawford were all in the audience supporting Balmain. Rousteing believes that the French and the English share the phrase: la nécessité est la mère de l’invention (necessity is the mother of invention). And Balmain and Paris Fashion Week have proven that fashion must go on.