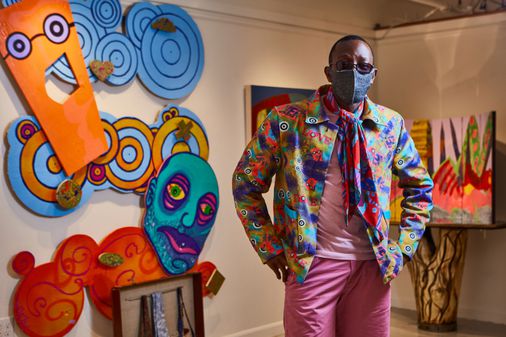 “Real F.R.I.E.N.D.S” at Beacon Gallery is a little jolt of sunshine. Jamaal Eversley, a painter and multi-media artist, called on a dozen friends to put together an exhibition about collaboration. The show, which features pieces by individual artists and collaborative works made with Eversley, is a tribute to community as a source of succor, joy, and generation. To that end, there are live painting demonstrations each week.

Eversley structures the show around his artistic avatar, called Spencer Ward, whom he refers to as “a bold nerd.” In the artist’s own works, Spencer is rendered simply, as an orange rectangle with glasses. High-keyed and graphic, Spencer always tilts, mouth agape — like the rest of us, set off kilter by the winds of change and whimsies of the heart.

The poppy portrait “S. Ward in Nerd of Hearts,” by Eversley and Fernando Fula, has Eversley (painted realistically by Fula) on the top half, Spencer on the bottom, against patterns of polka dots and stripes. But the heart of the nerd may be more fully fleshed out in a nearby pointillist painting by Eversley and LaShonda Cooks of Jaleel White as Steve Urkel, the dork with hidden seductive assets in the 1990s ABC sitcom “Family Matters.”

Much of the exhibition is sheer, glossy fun, with echoes of the late 1980s and 1990s, when Eversley grew up. Throughout, iterations of Spencer make it a treasure hunt. In “Spencer Ward IV: Metamorphosis,” by Eversley and Youveline Joseph, the jaunty orange rectangle transforms into a beautiful woman surrounded by butterflies, her hair boxy in a hi-top fade. Stephanie White has an exceptional wall of chromatic portraits — “Sweets” depicts a girl holding a dizzying lollipop. And Eversley and friends have clothing and snazzy painted shoes on view in a back gallery.

All this brightness and warmth happens against the backdrop of the darkness outside, which Eversley nods to in “Wake Up,” a video and poem calling back to Spike Lee’s1989 film about racism and police violence, “Do the Right Thing.” But Lee is another avatar for the artist, and “Real F.R.I.E.N.D.S” centers on the creative cocoon of community, not the forces that threaten it.