The former president, 74, and former secretary of state, 72, celebrated their 45th wedding anniversary with a throwback photo and sweet exchanges on social media.

Bill Clinton recalled the small Methodist ceremony in the young couple’s living room on Oct. 11, 1975, with 15 people in attendance.

“October 11th was a beautiful day 45 years ago. Still is. The bride was beautiful too. And still is,” he tweeted Sunday alongside a photo of the couple, adding, “Happy Anniversary, Hillary. I love you.”

Hillary Clinton, the Democratic presidential nominee in 2016, posted a photo from the wedding day on Instagram.

Most influential Women of the Century: Hillary Rodham Clinton among Arkansas among them

In the comments, journalist Lisa Ling alluded to some of the difficulties and public controversies the couple have been involved and overcome – the f first couple were introduced to the national scene in the 1992 presidential campaign amid allegations of Bill Clinton conducting a 12-year affair with Gennifer Flowers while the governor of Arkansas. 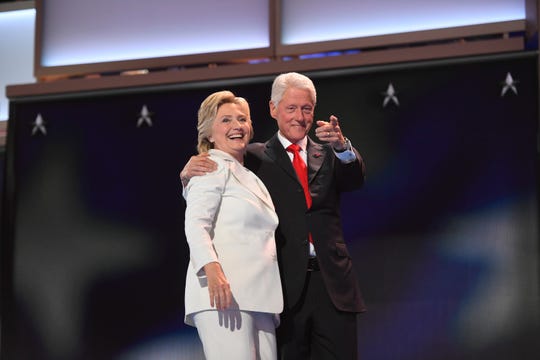 “No matter what anyone has ever said about your relationship, it has endured,” Ling wrote below Hillary’s Instagram post. “No marriage is perfect, we have all had our trials and tribulations. I have seen the deep love and respect you two have for one another. Congratulations on 45 years!”

On Sept. 26, 2014, the couple became grandparents as their daughter, Chelsea Clinton, and her husband, Marc Mezvinsky, welcomed their first child, Charlotte Clinton Mezvinsky.

And in March, Hillary told Andy Cohen that her husband helped her deal with the fallout from losing the election to Republican Donald Trump.

“He is so romantic and so sensitive that I will come home sometimes and he’ll have flowers for me because he knows I’ve had a bad day,” she said about Bill on “Watch What Happens Live.” “He’s really so thoughtful.”