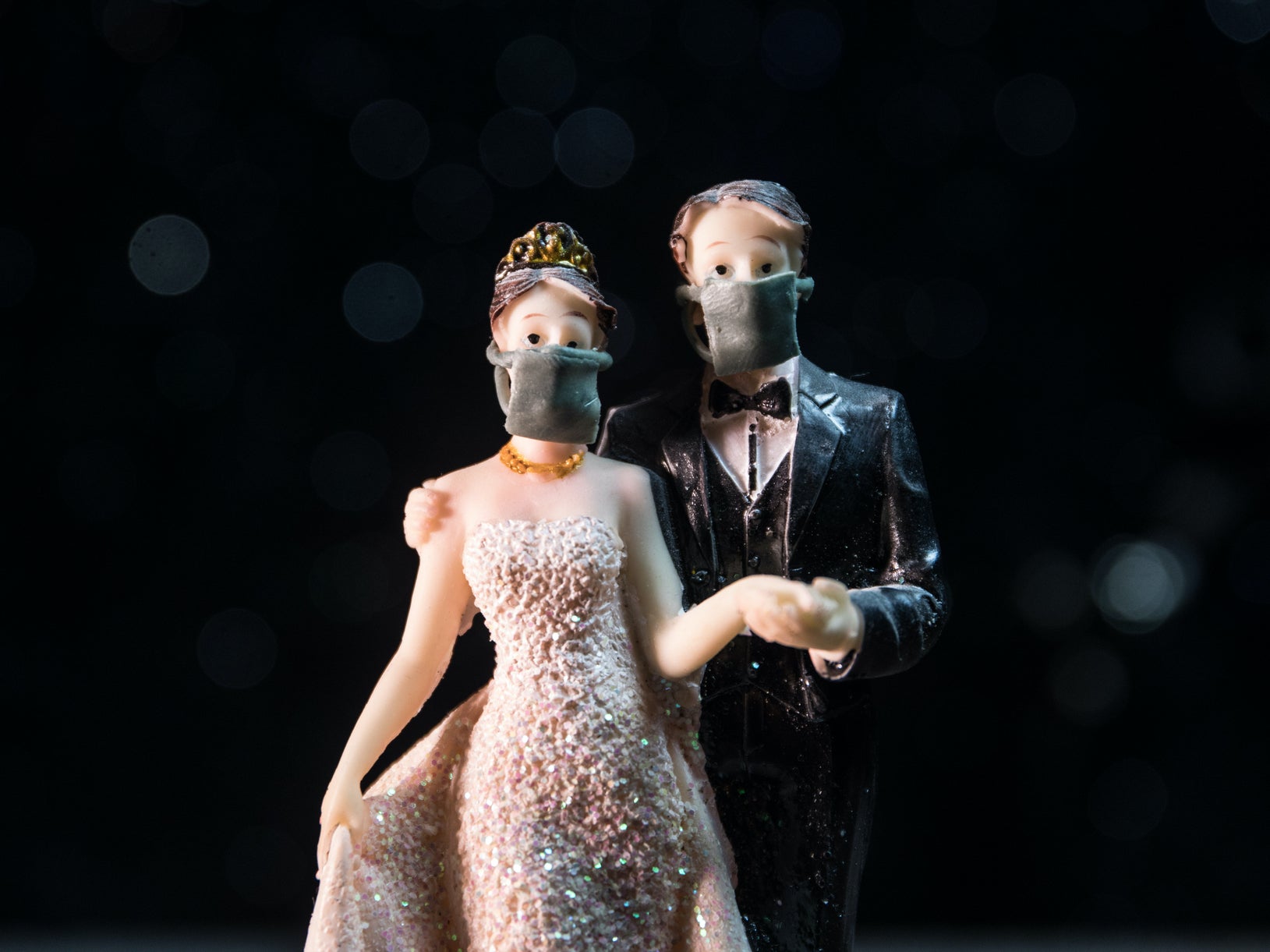 By now, wedding season should be reaching a triumphant end, thousands of bouquets thrown and garters tossed, with vendors retreating with fatigue. This year, of course, it never really got started.

Like most in the industry, Marianna Vaki, founder of London-based cake makers Whisk and Drizzle, began 2020 with a diary full of bookings but due to ongoing restrictions, she has been able to fulfil just 10 per cent of those orders, many of which had to be downsized. The rest of her brides have moved their weddings to next year, with some considering postponing again to 2022. If they do, she faces a second year with little-to-no income and the prospect that her business might not survive. “If weddings don’t resume next year, a lot of us won’t be here in 2022,” she says, adding that she is having to look for another job to make up for the financial losses she has suffered so far.

Vaki is just one of 400,000 people who work in the UK’s wedding industry, which contributes £14.7bn to the economy each year. As a seasonal sector, it acquires 79 per cent of its business between 1 April and 31 October, when thousands of betrothed couples tie the knot.

However, that has not been case for 2020. The Covid-19 crisis and subsequent government regulations have brought much of the wedding industry to its knees, and by the end of this month more than 200,000 weddings in the UK will have been postponed or cancelled. While this is devastating news to those who were hoping to get hitched, the cancellations mean that wedding suppliers, most of whom are small businesses, have lost an entire year’s earnings.

In March, the government’s nationwide lockdown ground the UK to a halt and with it, dashed the plans of couples set to get married. On 4 July, people were given a glimmer of hope as weddings were allowed to resume, albeit with a limit of 30 guests but, just two months later, the number of Covid cases began to rise once more and the government doubled down on social gatherings. The response from the government has been inconsistent in the eyes of the industry and has seen couples have to deal with a host of last-minute changes, including a complete U-turn on receptions, which saw couples given less than 24 hours notice to cancel their evening receptions for up to 30 people after prime minister Boris Johnson announced they would not be able to recommence as originally trailed.

On 22 September, Mr Johnson announced a series of new guidelines, many of which served a devastating blow to the wedding industry. While other sectors of hospitality, such as pubs and restaurants, were instructed to implement a 10pm curfew and only take bookings of up to six people per table, the 30-person limit for all weddings was drastically reduced to just 15, including the couple.

The limit takes no account of the size of venues, while in every other sector, the rules are based on square meterage, leaving many to question why it is acceptable for groups of strangers to get drunk in bars, while couples are being prohibited from celebrating their love in private spaces alongside close friends and family.

Martha Tobyn, founder and creative director of wedding design studio Anemone Style, describes the further government restrictions as “hugely upsetting”, adding that they fail to take into consideration the effort businesses have gone to to ensure they can deliver Covid-safe events, as well as the willingness of couples and their loves ones to adhere to the rules.

“Wedding planning involves a lot of problem solving and thinking on your feet. Our couples and their guest’s experience, comfort and safety is always top priority, pandemic or not, yet we are not being consulted on ways we might offer Covid-safe weddings.”

Alex Lovejoy, project manager at wedding DJ service Wedding Smashers agrees, stating that the 15-person rule is likely to serve as a “final blow” for many suppliers who are already struggling to make ends meet. “It’s terrible for everyone involved. Couples and suppliers spent so much time and energy making the most of the 30-guest rule and for it to have been halved out of the blue like that was the final blow,” he says.

The further restrictions, coupled with a lack of sector specific support, has caused many wedding vendors to feel as though they have been sidelined by the government, with Tobyn pointing out that losing out on grants and other financial opportunities can do more than harm a person’s bank balance. “It takes a toll on one’s mental health when you don’t know if this small business you’ve put everything into building may not make it through,” she says.

So, why is an industry that contributes billions to the country’s economy each year not being given more consideration by the government?

Before launching her own wedding design studio called Pink Palms, Ashleigh Li worked as a critical care nurse. While Li says she understands that precautionary measures must be taken, she fears that decisions are being made by politicians who consider the wedding industry to be frivolous and unimportant.

“Honestly, my fear is that middle-aged men are judging an entire industry as ‘dreamy’ and ‘feminine’, and only want to listen to other middle-aged men’s opinions on it,” she explains. “I’m not sure how a sector that contributes over £10billion to the UK economy, that also supports UK and worldwide travel and tourism, can be so easily pushed aside.

“We aren’t asking for a return to big weddings, we are very sensible people who understand the impact of Covid and want to comply wherever possible to deliver the best day possible for our clients. But putting what feels like a ‘plucked out the air’ 15-person stranglehold on our livelihoods and thousands of couples’ life changing moments, feels particularly cruel.”

Li is not alone in her thoughts regarding the approach of government officials and, when you consider recent comments made by business secretary Alok Sharma, it is not hard to see why.

Earlier this month, Mr Sharma was questioned in the House of Commons by Labour MP Ed Miliband about support for the wedding sector. After being accused of leaving workers in the industry “out in the cold”, Mr Sharma said: “This department does stand up for businesses and we have very regular dialogue with sectors on an ongoing basis. We’re not going to be able to protect every single job, very, very sadly.

“But that is why we are providing extra support in the welfare system, but also really importantly, with skills, apprenticeships and the Kickstart Scheme for young people. This is so we can help people into better jobs.”

To indicate that the wedding industry is no longer viable, all because it was closed by the government to help tackle the transmission of the virus, is “incredibly insulting”, suppliers say.

“We are skilled, we are trained and we are great at what we do,” says Tamryn Settle, a celebrant and senior writer at UK wedding directory Love My Dress. “To write that off is dreadful. It underestimates the creative talent in the sector, it negates the importance of hundreds of thousands of jobs and it tells almost half a million people, in every corner of the country, that their government doesn’t value their contribution and sees their work as frivolous and expendable.

The frustration surrounding the government’s lack of understanding has resulted in the creation of a new online campaign called What About Weddings. Together with a number of industry professionals, Love My Dress created the hashtag so that those working in the sector could rally together and have their voices amplified.

“The entire wedding sector must be heard. And sadly, we do not have the privilege of time on our side,” the campaign’s website reads. “There isn’t a single day to waste on this. The prime minister’s decision to reduce the number of people who can attend a wedding from 30 to 15, effective 28th September, makes our need for sector specific support to help us bridge the gap to the other side, critical and immediate.”

While many hospitality businesses that survive this time will be able to spring back almost instantly post-Covid, the wedding industry is likely to take significantly longer to recover, considering the typical lead-time involved in planning such an important event, which typically takes anywhere between 12 and 24 months. This makes the need for a roadmap of recovery critical and, while the government has offered general economic support measures to businesses – including the furlough scheme and state-backed loans –  the current one-size-fits-all approach seemingly ignores the need for sector-specific support for those that have been hardest hit.

The prevailing view is that it feels unfair for the furlough scheme to end for the wedding sector at the same time it does for companies that are starting to see a return to normality, with those affected calling for urgent action and the chance to work alongside the government to come up with workable solutions for moving forward.

“Listen to the people who are lobbying,” pleads Li. “They have solutions and answers, but they are not being listened to. The wider events industry needs to be taken seriously – we are more than willing to be compliant but we want to be given the chance, just as the hospitality sector has been.”

The overriding message from suppliers is that they want to find ways to move forward and get back to work and allowing them to do so would also be a big win for the government, with thousands of people able to retain their jobs. But, for the moment, their careers and livelihoods are on hold.