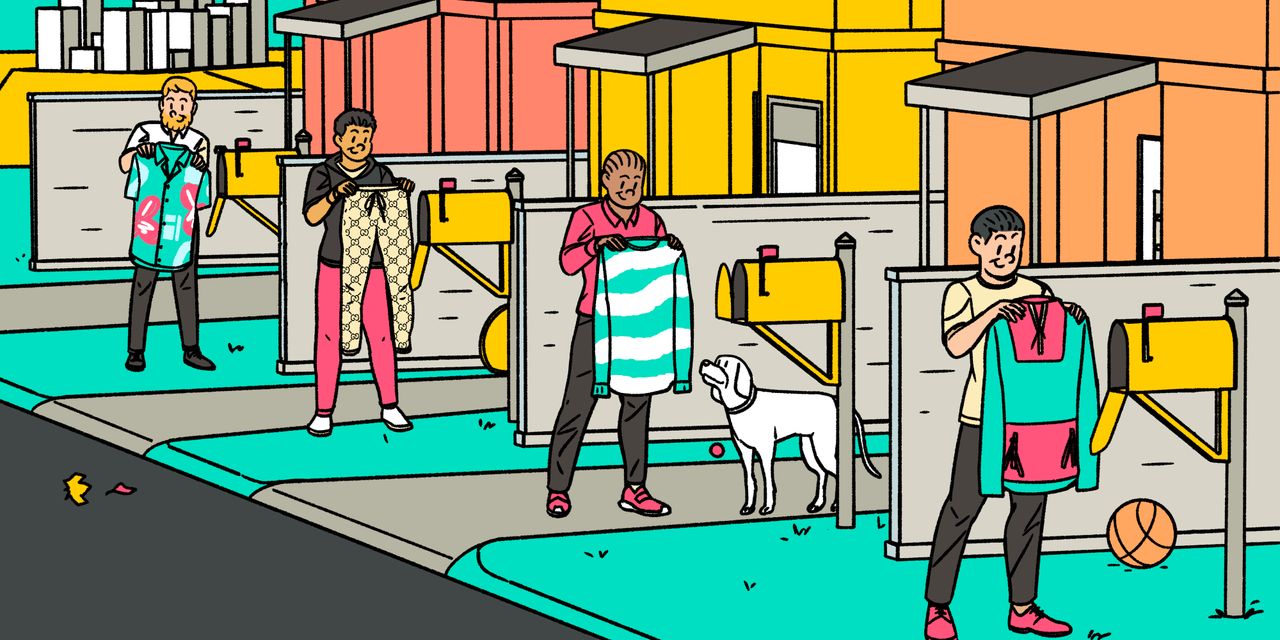 BELGIAN DESIGNER Dries Van Noten recently produced what is, by any measure, a loud shirt. The front of this button-up shows a blossoming yellow and purple flower while the back depicts wispy foliage. It’s beautiful, but wear it too often and you’d risk being known as the “floral shirt guy.” But what if, instead of buying such a shirt, you could rent it the way women lease dresses from Rent The Runway? You’d put it on, reap some compliments and then return it, never regretting that you spent $619 on a shirt you wore only once or twice.

This enticing rental concept inspired Seasons, a year-old startup in New York that leases out over 500 other pieces of casual men’s clothing—in a range of sizes—including that Dries shirt for as little as $65 a month.

Women have rented everyday clothes for years, served by companies like Nully, the Style Lend and most prominently Rent the Runway, which in 2019 notched a billion-dollar valuation. What distinguishes Seasons is that it’s aimed squarely at young men with an active interest in fashion. Seasons carries a cornucopia of splashy garments like tie-dyed Amiri sweatshirts, a python-pattern-printed jacket from Stussy and an ample number of extravagant camp shirts. These are the sort of frenetic clothes that teens and early twenty-somethings flex in when recording TikTok clips or documenting their outfits on Instagram.

The vibrancy of these clothes is key—especially when they’re viewed on a puny phone screen. As Alexis Ohanian, an early investor in Seasons wrote in a Medium blog post from January, for many of today’s fledgling fashion-fans, “owning it is less important than being photographed in it.”

At 37, Mr. Ohanian is a hair older than Seasons’ typical clientele, which can roughly be divided into two youthful age groups. Seasons’s founder Regy Perlera, 28, describes the first group as “grown men between the ages of 25 and 34.” The second comprises high-schoolers and college students (Mr. Perlera called them “kids”) who are even less likely to be able to plunk down $470 on a fleece from Acne Studios or $980 monogram trousers by Gucci, but obsess over these labels the way the MTV generation worshipped Nirvana and R.E.M.

Before starting Seasons, Mr. Perlera logged time at StockX, a sneaker-resale platform, and at

on a team that worked on the brand’s shopping app, SNKRS. When he struck out on his own to start Seasons in June 2019, the environment was a key concern, one he shares with many in his generation. He likes to reference a 2018 study conducted by the Ellen MacArthur Foundation and McKinsey & Company that claimed that if we wore existing clothes more often, it would significantly reduce greenhouse gas emissions. The logic behind this projection is that if people wore their clothing more, it would over time diminish clothing waste and tamp down the demand for new clothes—and the pollution-spewing production that goes along with that.

Season’s eco-conscious pitch drew users in. Dervin Dimanche, 24, a technical recruiter, fashion fan and Seasons client in New York, liked that Mr. Perlera and his team were “voicing their stance on reducing their footprint.” Mr. Dimanche spoke more about the budgetary benefits he derives from using Seasons. “I’m saving money and not sacrificing any looks,” he said referring to the way the platform helps keep him in of-the-moment threads.

For the lowest-level membership fee, $65 a month, users can rent a single item at a time, exchanging it for something new just once a month. Much as you could watch “Top Gun” however many times you wanted after renting it from

Seasons lets you wear—and wash or dry-clean—a rented shirt however many times you wish in that one-month period. For a more comprehensive closet overhaul, Seasons offers an “all access” membership that costs up to $175 a month and allots you three items you can exchange as many times as you wish anytime.

“Over the course of a year, I’ll maybe spend $1,500 or so on renting these clothes. So for $1,500 I was able to wear 15, 16 shirts, instead of just buying one and then wearing it maybe twice throughout the whole year,” said Dmitry Polonskiy, 30, a software engineer in New York, who has been using Seasons for about a year, signing up at the highest membership tier. Through the start-up he selects and leases clothes that he would date for one night, but not marry for life, such as a $685 silk shirt printed with speedboat motifs that he recently wore to a family event. Even his aging grandfather, “who doesn’t really like to dress flashy,” approved of the shirt. Mr. Polonskiy got compliments for a fraction of the shirt’s retail value.

When starting out, Mr. Perlera and his team purchased hundreds of pieces of clothing at retail, in a range of sizes to accommodate different body types. For example, the floral Dries shirt can be rented in a medium or large, while those monogrammed Gucci trousers are available in 32 and 34 waist sizes. Building an inventory was a costly endeavor, requiring some serious funding: Seasons raised $4.3 million from investors like Mr. Ohanion’s Initialized Capital, Notation Capital in Brooklyn and through the rapper Nas’ personal investment fund.

Maintaining a reliable inventory remains a challenge. The software engineer Mr. Polonskiy noted that clothes in his size (medium) are often already checked out by another user. To keep demand in check, Seasons plans to limit its membership. Mr. Perlera refused to reveal exactly how many members Seasons has to date, saying only that Seasons will cap membership at just 300 people by the end of this year. That is a microscopic figure compared to Rent the Runway’s more than nine million users, but Mr. Perlera said Seasons will open membership up next year as it broadens its inventory.

Like companies across the fashion industry, Seasons has been grappling with complications raised by Covid-19. For two weeks, Seasons shut down its operation to implement greater safety measures at its warehouse. And, as many traditional stores began offering deep discounts to gin up sales, Mr. Perlera and Season’s buying director Jesse Hudnutt decided to shift their acquisitions focus away from current clothes and instead, start sprinkling vintage T-shirts into the rental assortment. The rarefied shirts kept users hooked and accounted for 40% of the company’s total rentals this summer.

Shrewdly, Seasons cycles out clothes depending on the season—heavy outerwear arrives in fall, shorts appear in summer—but Mr. Perlera also plans to stash garments for years before adding them back to his rental selection again. This idea stems from his stint at Nike, which in recent years has “retroed,” or reissued, desirable sneakers from its past with greater frequency. Once “vintage” items had to be decades old to circle back into style. Today, a pair of Air Jordans, or when it comes to Seasons, a quilted Craig Green jacket, needs to be off-market for only a couple years to magically pop into circulation again—at least for 30 days.