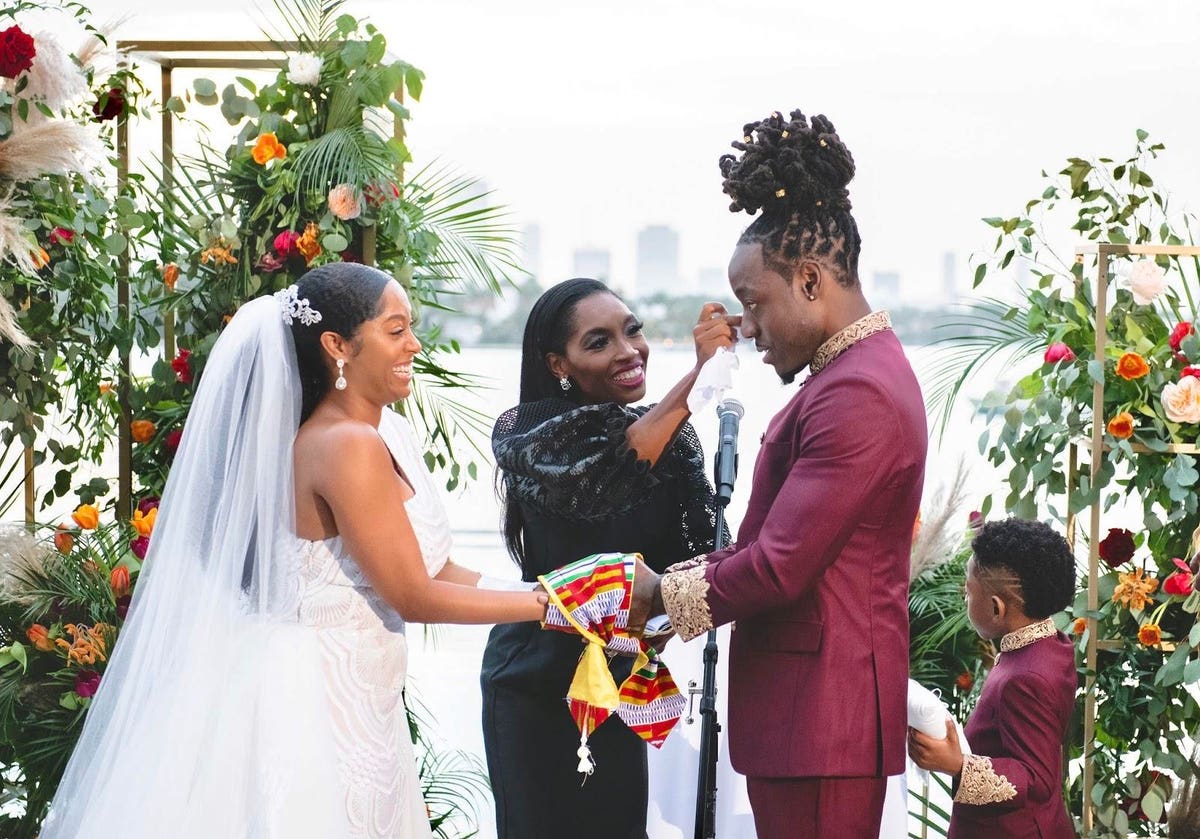 With ceremonies on hit shows like Netflix’s “Love Is Blind”, VH1’s “Love and Hip Hop”, and more, Rev. Roxanne Birchfield is no stranger to officiating weddings. And after having conducted more than 200 weddings, serving as a Chaplain in the United States Army Reserves for the last 8 years, and becoming the founder of Married By Rev. Roxy, a NYC-based officiating and premarital counseling service, the most astonishing and unexpected wedding Birchfield describes was her own.

After three weeks of knowing each other and training as chaplains in the Army in Fort Jackson, SC on a platoon together, Birchfield and her husband were married on her lunch break. Although they were married relatively quickly, Birchfield expresses the importance of not recommending this advice to anyone. For her this experience is her story, but not one others should prescribe to.

The Inspiration That Led To Officiating Weddings

Birchfield’s company was launched out of the brokenness she describes experiencing when watching her parents—two imperfect people who met in seminary school—marry and then separate when she was seven years old. It has had the most profound impact on her life. Therefore, when working with couples, Birchfield often finds herself excited to pronounce a couple as married given she feels the same air of wanting the relationship to work similar to that of her parents.

With a background of studying acting at the Fiorello H. LaGuardia High School of Music & Art and Performing Arts, Birchfield has infused into marriage pronouncements a voice that has left wedding couples and their guests swooning since the very first wedding she officiated for her sister in 2016. “For years prior to performing my sister’s wedding I served as a Chaplain within various hospitals and had come to realize there were so many people, statistically, without clergy that found themselves in need of spiritual support at various junctures of their lives. People have a natural desire to seek meaning and purpose in their lives including their wedding ceremonies. For my couples, it’s not only about the awestruck decor and design, it’s also about the words,” Birchfield shares.

When officiating, Birchfield prides herself on collaborating with the couple to gather information on their journey in order to tell a story that leaves a lasting impression on guests. In Birchfield’s opinion most officiants don’t create the space for this, they generally use scripts and fill in the names of those who they wed. However, for her, words hold profound meaning and building this story enables her to connect with the couple as if she’s known them throughout the course of their relationship. The process of preparing for a wedding takes Birchfield roughly 15+ hours, given her attention to detail, and her creation of quotes and text relevant to each couple’s story.

Through her experience over the years, Birchfield has found that her clientele base for weddings has grown through connections with wedding planners and those who have found her on social media. With her first celebrity wedding being for a VH1 reality TV show, she unearthed that a producer found her through a wedding planner and then as more producers began speaking with one another her list of shows began to expand.

Three tips Birchfield follows to garner work with celebrity clients and others on such a large scale include:

Being a Person of Color & Woman in The Officiating Industry

Birchfield shares that the landscape for women of color in the officiating industry has often been challenging and unusual, especially given a time such as this were the racial justice movement has risen strongly during the COVID-19 pandemic. However, in spite of the difficulties, Birchfield describes herself as a very forward person even when others do not believe her when she shares her profession. In order to circumvent the misnomers, Birchfield has worn as she describes “custom-made over-the-top” uniforms that cover her neck—a Protestant tradition—and are long flowy and have puffy arms. Her vision with this presentation is to leave an outstanding impression prior to even beginning the officiating process.

In addition to her presentation, Birchfield’s ceremonies are unique due to the rituals she embeds into officiating each ceremony. One ritual she has incorporated into her ceremonies is handfastening. In handfastening she mixes an Irish tradition with African cloth, by wrapping a cloth around a couple’s hands and tying it at the bottom to serve as a symbol of unity. The visual imagery Birchfield creates enables the couple to see the spiritual decision they are making prior to putting their rings on and celebrating while embracing African culture.

Birchfield’s Words of Wisdom for Couples

With her experience officiating hundreds of weddings and supporting couples with the premarital counseling process, Birchfield has found that love is “both a feeling and decision.” She believes that the fairytale marriages that many look for are not realistic, rather, once vows are made and the feelings oscillate between positive and negative, commitment is what keeps a couple together. She recommends the following advice:

Birchfield believes in the profound power that marriages have and their great opportunity to signal the start of unique and vastly moving journeys that can transform the future generations the unions cultivate. It gives her hope that each union contributes to rewriting the story from her childhood that got her started in the industry.

In closing, Birchfield shares that: “Living in a Western culture whose narrative is that individual freedom is the only way to happiness, my husband  and I’s hope for all the couples we journey through the full counseling and wedding process is that they will not be confined by culture’s narrow perspectives, personal fears, superficiality or practical experience but that they will do the work necessary to make wise decisions about their marital futures.”