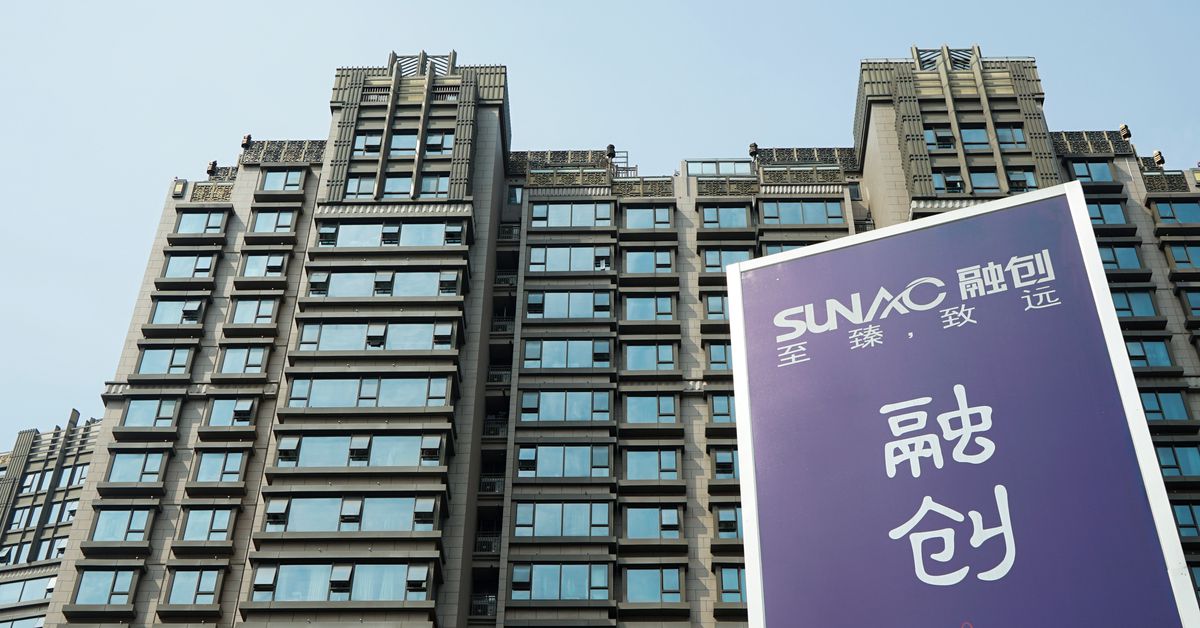 An advertisement of property developer Sunac China Holdings is seen at a residential complex in Shanghai, China March 25, 2018. REUTERS/Stringer

HONG KONG, May 11 (Reuters) – Some of Sunac China’s (1918.HK) bondholders had not received coupon payments from the property developer on a $750 million offshore bond by the close of Asia business on Wednesday when a month-long grace period ends, two people with knowledge of the matter said.

Failure to make $29.5 million in interest payments on the October 2023 bond that had been due last month could represent the first offshore default on a public bond by the nation’s third-largest developer by sales.

The sources declined to be identified as they were not authorised to speak to the media. Sunac declined to comment.

A default could trigger the cross-default provisions on all of the developer’s $7.7 billion worth of bonds in international capital markets.

Sunac has missed four dollar coupon payments totalling $104 million since April, with three of them still in grace periods.

The firm said in March it was discussing debt solutions with offshore creditors after downgrades by global rating firms, as well as seeking payment extensions with onshore bondholders.

China’s property sector has been hit by series of defaults on offshore debt obligations, highlighted by Evergrande, as well as bond exchanges, with Zhongliang Holdings (2772.HK) the latest one to extend payments.

The debt crisis has spilled over into the country’s vast property market, with new home sales and construction slumping as financing gets tougher and potential home buyers shy away, fearing some projects may be stalled.

Still, with many Chinese property bonds now trading below 30 cents on the dollar, the sector’s debt problems have largely been priced in, market participants said. Sunac’s bond in question traded at 19.386 cents on Wednesday morning, according to data from Duration Finance.

“The impact of Sunac’s default on the financial market will be smaller than Evergrande and Kaisa’s default,” said Fitch Ratings analyst Edwin Fan. Fitch downgraded Sunac to “CC” in late March before withdrawing the rating last month.

“(But) it shows that many property developers will need to do onshore and offshore debt exchange,” Fan added.

Executives at two property firms told Reuters the market had been somewhat confident that Sunac would be able to repay its debt with state support, and now its failure reflects a higher likelihood that a few other major developers, such as Shimao Group (0813.HK), could miss their upcoming obligations.

“The outstanding these companies hold accounts for a sizable portion of the total Chinese property high-yield bonds and they are widely held by investors including some passive funds,” said one of the executive.

“It will just further hit the confidence and investors will never touch Chinese property bonds again.”

Shimao did not respond to a request for comment.

In March, Fitch estimated Sunac had up to $2.8 billion of offshore debt that could become immediately due because of creditors requesting early payments after multiple-notch downgrades by rating agencies.

The company has an additional 11 billion yuan of debt in onshore and offshore capital-market maturing this year.

Sunac has been scrambling to raise funds by issuing new shares and disposing assets.

On Tuesday, media outlet Cailianshe reported the developer is in talks with potential buyers to sell a 51% stake in the world’s largest indoor snow park, currently under development in Shenzhen.

It has sold assets to state-owned peers including Beijing Capital Group and Zhuhai-based Huafa Group for over 20 billion yuan, local media reported earlier this year, and a source has told Reuters it was in talks with four major Chinese asset managers including Cinda on project cooperation. read more

If Sunac goes into default, it could further hammer already weak homebuyer confidence in China, executives at other developers cautioned. Sunac is a major company in China and known for building mid- to high-end properties.