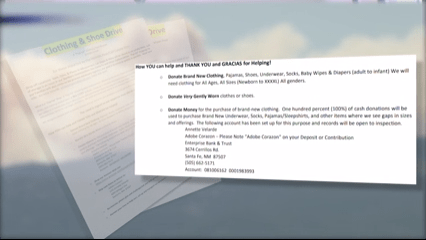 SANTA FE, N.M. (KRQE) – It’s been nearly two months since the Calf Canyon Hermits Peak Fire started and communities in the area are still in need of help. “Just watching the fires from afar, I had angst in my stomach,” said Annette Velarde.

During those two months, some living near the Calf Canyon Hermits Peak Fire have been evacuated from their homes. “I can’t imagine having to move that quickly with kids, with animals, not knowing if you were going to have something to come home to,” said some leaving with just the clothes on their back.

“As it grew and grew, I kept seeing the need for resources,” said Velarde.

Resources like food, water, and cleaning supplies quickly piled up but Velarde noticed another need – clothes. “My family was evacuated from our little farm and ranch property,” said Velarde.

Velarde grew up in Mora and has family in Las Vegas sharing the difficulties they are facing. “All I could do at that point was watch or help them evacuate or whatever the case might have been,” said Velarde. Now, she no longer wants to sit by and watch, so Velarde is setting up a clothing drive.

“On social media, people wanted to donate clothes,” said Velarde. “So that became kinda my mission was ‘okay, let’s do a clothing drive.’”

Collecting new and gently used items from Albuquerque, Santa Fe, and nearby communities. “I’ve gotten emails. I am heading to Mora this afternoon, there are four pick-ups I need to do this afternoon,” said Velarde.

Knowing her hometown community is proud, she wants resources readily available. “I don’t want them to have to beg for help, I want it to just be there and, you know, that’s the goal,” said Velarde.

Details are still being ironed out, but Velarde says the distribution day should happen at the Las Vegas Elks Lodge within the next two weeks.

She’s also trying to find a place to distribute in Mora. If you are interested in donating you can reach Annette, here.