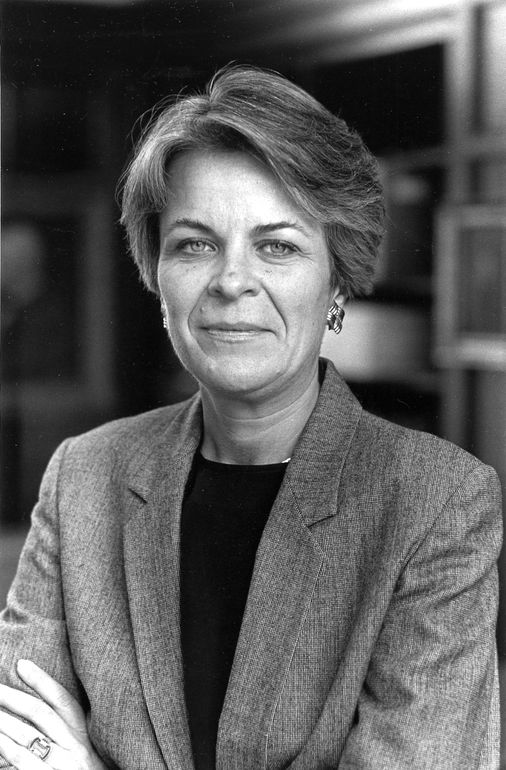 “Connie understood that religious scholarship had important public ramifications,” Braude said, “and that women’s rights could not really advance without women scholars being able to weigh in on theological issues — on the interpretation of the scripture, the Bible, the Koran.”

Hired at age 30 by Krister Stendahl, who was then dean of Harvard Divinity School, Ms. Buchanan stayed at Harvard until 1997. Along with directing the Women’s Studies in Religion Program, she was a faculty member and associate dean at the school, and also spent six years as special assistant to the president when Derek Bok led Harvard University.

Among those roles, she left her greatest legacy directing what is known as WSRP, which annually hosts five full-time research associates who serve as visiting faculty for a year and work on book-length projects.

“She really invented the WSRP out of whole cloth,” Braude said for a divinity school tribute. “There was a nascent program before she came to HDS, but there was no precedent for what she created.”

Ms. Buchanan began leading the program a few years after its inception and is credited with turning it into a major force nationally and internationally as former research associates have gone on to write books, become significant theologians, and diversify the gender and racial ranks of faculty in universities across the country.

That was not the situation in theological studies when she arrived in 1977.

“There is no other profession in which, until recently, women have been excluded by policy from positions of authority and in some cases still are,” she told the Globe in 1983.

Gender exclusion reached beyond modern-day demographics in the pulpit and among professors to Western theology itself, because historically, men had written and interpreted religious texts.

“When you have men describing God, they assume God will have the attributes of men,” Ms. Buchanan said.

“Women tend to see God within the human drama, as people relating to people and not out there, separate,” she added. “And they see God as being absolutely primarily invested in the welfare of the oppressed, as a God that wants to move them out of the oppression.”

Constance Hall Buchanan was born in Northampton on June 19, 1947.

At that time her father, the Rev. Albert Brown Buchanan, headed the Northfield School’s religion department. He subsequently held associate rector and rector posts in New York City churches. Upon his death, at 67 of amyotrophic lateral sclerosis, he was hailed by Bishop John Coburn of the Episcopal Diocese of Massachusetts as “one of the really bright theologians of his generation.”

Her mother, Barbara Masten Buchanan, who died in 2015, had helped launch the Women’s Talent Corps, which is now Metropolitan College of New York. She was involved in other women’s education initiatives as well, and worked on women’s health issues on Cape Cod in retirement.

Ms. Buchanan attended The Spence School in New York, graduated from Barnard College with a bachelor’s degree in history, and received a master’s in European history from Brown University.

After teaching history at what is now Bard College at Simon’s Rock in Great Barrington, she received a Rockefeller fellowship in 1975 to study at Episcopal Divinity School in Cambridge. Two years later, she began directing Harvard Divinity School’s Women’s Studies in Religion Program.

“She was very, very good at that job partly because she had a way of seeing the implications of what people were working on,” said Clarissa Atkinson, whom Ms. Buchanan recruited to the divinity school, and who formerly was an associate dean for academic affairs there.

Introducing to one another current and incoming scholars who had intersecting research pursuits, Ms. Buchanan “had a remarkable ability to put things together and see connections,” Atkinson said.

“Frankly, her ability to match task and talent was extraordinary,” said the Rev. Janet Cooper Nelson, a longtime friend who is the chaplain at Brown University. “She loved good ideas, smart people, and efforts in the world to bring more justice, more inclusion — to bring to visibility people who were not seen and whose plight needed to be seen.

Ms. Buchanan, she added, “would see something in you that you didn’t see in yourself and she would see past the barriers that you were convinced would keep you from doing something.”

The author of “Choosing to Lead: Women and the Crisis of American Values” (1996), Ms. Buchanan became a senior program officer at the Ford Foundation in 1997 and retired a decade later, well into her Parkinson’s diagnosis.

“While outlining the crises our children and families face today, Buchanan encourages women to examine their own values, expectations, and moral compasses in order to lead our country and our world to a new vision,” Children’s Defense Fund founder Marian Wright Edelman wrote of Ms. Buchanan’s book.

A virtual memorial service will be announced for Ms. Buchanan, who leaves a niece and nephew.

As Harvard Divinity School celebrated the 50th anniversary of women enrolling as students, Ms. Buchanan’s portrait became the first of a woman to be displayed at the school alongside those of men who had led the institution.

“I wanted the portrait to encourage women of different races, religions, classes, and cultural backgrounds to boldly claim the school’s rich legacy, mission, and authority as theirs, too,” she said at the dedication.

Years earlier, when the National Council of Churches debated a new translation of the Bible that would stop referring to God as solely male, Ms. Buchanan told the Globe in 1983 that “assumptions go deep in a paternalistic culture. The theme of the culture of paternalism is that the male is dominant and the female is subordinate. Women are perceived as secondary creatures. But many women believe this is not the main message of Christianity, that this is a distortion perceived through a male lens.”

She also could dismiss paternalism with humor.

“Connie laughed at patriarchy,” Braude said. “When other women were feeling so demoralized, Connie would just show us the ridiculousness of the things we were struggling over and that we were struggling with. That ability to laugh at the patriarchy was just so empowering.”

Bryan Marquard can be reached at [email protected]