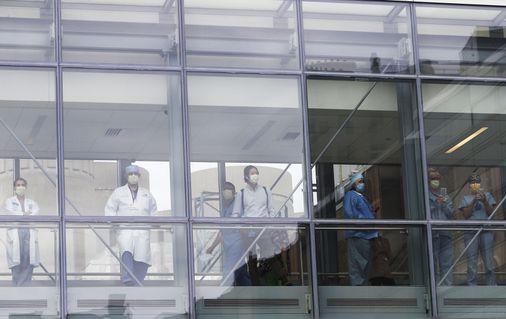 Officials at Sturdy Memorial Hospital in Attleboro say a cluster of COVID-19 cases there has expanded to at least four patients and 10 employees in the past week, while Brigham and Women’s Hospital now counts at least 52 patients and employees linked to its September outbreak, illustrating the continuing challenges of containing an aggressive virus as infections rise statewide.

On Sept. 29, Sturdy closed its Balfour surgical wing, where the cluster is believed to have originated, to new patients, and has prohibited visitors to the entire hospital until further notice. So far, all patients and employees who have tested positive are linked to the Balfour wing, said Dr. Brian Patel, the hospital’s chief of emergency services.

“We have tested several hundred employees to be on the safe side and are trying to do everything we can to contain further transmission,” Patel said. “It’s still not clear to our infection control people who are investigating [the source of the outbreak] to try to determine the exact cause.”

The Sturdy outbreak follows September clusters at Beth Israel Deaconess Hospital-Plymouth, New England Baptist Hospital, and at Brigham and Women’s, which in a posting on its website Monday said that 39 employees and 13 patients have tested positive. The hospital said there has not been a new patient infection related to the cluster since Sept. 30, but that testing is ongoing.

“We expect that as we continue to test, we will continue to identify a handful of positive employees,” the posting said. “To this point, the overall prevalence rate of our non-cluster community is less than 0.1 percent, a fraction of the city and state rates.”

The rising rate of positive cases across the state in recent weeks is likely fueling hospital clusters, said Dr. Shira Doron, an infectious disease physician and hospital epidemiologist at Tufts Medical Center. Tufts contended with a cluster of its own during the spring surge.

“As soon as the state’s stay-at-home order was enacted [in the spring] our employee infections dropped dramatically, while we were still seeing a rise in patient caseloads,” Doron said. “What I think we are seeing now is the manifestation of rising community transmission because hospital employees are members of the community and they are becoming infected in the community.”

Recent hospital cluster investigations have indicated that inconsistent use of personal protective equipment by staff, and lack of physical distancing while staff eat in cramped break rooms unmasked, partially contributed to the outbreaks.

Hospital leaders across Massachusetts have said they are searching for larger break rooms for employees, converting unused conference rooms and offices, and stepping up reminders about masks and protective gear. Doron said another common problem has been the hospital culture of working while sick, especially per diem workers who don’t get paid if they are out.

“And for doctors, there is no redundancy in the system,” Doron said. “There is nobody to ask to bail you out when you are sick. That hasn’t been solved, and that has to be solved in this pandemic.”

Now in the eighth month of the pandemic, staying vigilant can be exhausting. Patel said he e-mails infection control updates and walks around his hospital in Attleboro several times weekly with reminders to workers.

“We appreciate all the hard work they’re putting into this,” Patel said. “This is a marathon, and it’s something we have to continue to keep on top of.”