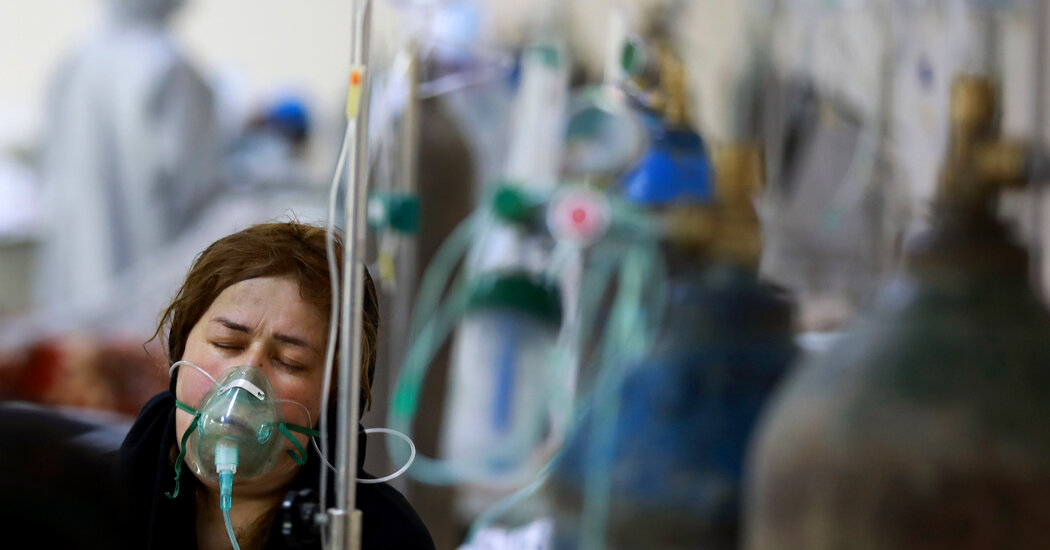 “There’s a really legitimate concern that this is about women’s lack of access to services.”

In May, in a small village in Herat Province in Afghanistan, Sediqa’s husband came down with symptoms of Covid-19 and was taken to a hospital in Herat City for treatment. When he came home, 10 days later, Sediqa looked after him.

Within a week, she fell ill, too.

“I had the same symptoms and day by day, it got worse,” said Sediqa, whose last name has been omitted for fear of repercussions. “I was feeling so weak, I didn’t feel like eating or drinking.”

But when she asked to go to a hospital, her husband refused. “He said ‘no way.’ He told me to sunbathe and drink more tea.”

Sharifa, who lives in Kabul, faced a similar situation. Her husband tested positive for the coronavirus and, in caring for him, she eventually fell sick, too. But her husband stopped her from getting a test or seeing a doctor.

“My husband said that I wasn’t even sick, and that I was just seeking his attention,” Sharifa said. “He was even laughing at me.”

In Afghanistan, the number of women reported to have tested positive for the virus or to have died of Covid-19 is far below the numbers reported for men. Globally, men account for 53 percent of confirmed cases and 58 percent of deaths, according to the independent research group Global Health 50/50. But the same organization’s country tracker shows that in Afghanistan, men account for 70 percent of cases and 74 percent of deaths — a peculiarly wide discrepancy that experts say is most likely the result of gender inequalities that shut women like Sediqa and Sharifa out of the healthcare system and the public sphere.

“There’s a really legitimate concern that this is about women’s lack of access to services,” said Sarah Hawkes, professor of global public health at University College London and co-director of the Global Health 50/50 research group.

There is, however, an important caveat to the data from Afghanistan — it doesn’t include information on the country’s testing rates, Professor Hawkes noted. Anecdotally, testing is not reported to be either frequent or widespread, despite being free, meaning the numbers aren’t fully capturing whether the discrepancy in infection and death rates is because women aren’t being tested or because they are actually not being infected.

Afghanistan also is not the only country with a notably wide gap between male and female infection and death rates. In Singapore and Qatar, for example, men make up around 90 percent of confirmed Covid-19 cases, Professor Hawkes said, partly because of bad outbreaks among male migrants who work in low-paying jobs and live in tight quarters (neither of those countries has disaggregated data for deaths).

Some experts have also pointed to biological differences between men and women as a major driver behind the sex discrepancy in global fatality rates.

But with Afghanistan, “it is quite likely that women simply aren’t getting into the system,” Professor Hawkes said.

Decades of conflict and widespread poverty have made access to Afghanistan’s fragile health care infrastructure difficult for both men and women, noted a recent report by Médecins Sans Frontières, the group also known as Doctors Without Borders. But women and children are more likely to be left out of that system or receive substandard care because of patriarchal traditions that remain deep and prevalent in Afghanistan.

Afghan women face obstacles both within their own households and the healthcare facilities themselves, explained Suraya Dalil, who served as Afghanistan’s public health minister from 2010 to 2014 and now leads special programs in public health at the World Health Organization.

“Women have to be accompanied by somebody to go to the hospital, so those decisions are often made by the men in a household, whether it’s the husband or the father or the son,” Ms. Dalil said.

And when women do get to healthcare facilities — a perilous task in itself owing to the country’s vast mountainous landscapes — they are expected to engage only with female doctors, Ms. Dalil added. That becomes a near-impossible hurdle to overcome given the small number of female doctors, particularly in rural settings.

Currently, the country has just over 2,000 female healthcare professionals, according to official government figures, serving the country’s more than 18 million women. And many of these workers, according to the World Health Organization, are concentrated in Afghanistan’s urban centers.

Because Sediqa’s husband insisted that she would not be checked by male doctors, her brother was compelled to consult a doctor over the phone. She was prescribed some paracetamol and, after 27 days, started to feel a little better.

In Sharifa’s case, seeing a doctor was simply out of the question. Now 50 years old, Sharifa hasn’t seen a male doctor since she married 35 years ago, when she was 15.

“When my husband gets sick, I do anything I can,” she said. “I take him to the doctor, I talk to his male doctors. But when I get sick, I am not allowed to see a male doctor. I delivered my two boys at home.”

If a woman does end up seeing a doctor, and the situation gets to a point where she is hospitalized, another female relative is expected to stay with her at the hospital, Ms. Dalil said, creating yet another wrinkle in a complex situation.

Add to all of this the cost of health care, which is unaffordable for many Afghans, and a volatile environment in which health care facilities are frequently bombed or attacked by insurgents, and the chances of a woman actually receiving adequate care become increasingly slim, Ms. Dalil explained.

The Afghan government claims that it has tried to remove some of these barriers over the years. “The ministry does its best to provide services for female patients,” said Masooma Jafari, the deputy spokesperson for the ministry of health. “We have female doctors and we try to allocate separate areas and beds for female patients.”

But the government did not provide specifics about how it planned to close the gender gap in coronavirus testing and treatments.

Another explanation for the gap in female infection and death rates in Afghanistan could be the fact that the country’s labor force, even before the pandemic hit, is still male-dominated.

A new study, published in May by the Centre for Economic Policy Research, tracked data from Global Health 50/50 against workforce participation rates of O.E.C.D. countries, and found a positive correlation between women’s participation in the workforce and the Covid-19 death rate for women.

“The percentage of female deaths due to Covid-19 is higher in countries in which women comprise a greater share of the full-time workforce,” writes Renée Adams, the author of the study and a professor of finance at the University of Oxford who focuses on gender inequality. “Work may be associated with a higher incidence of pre-existing conditions and greater exposure to the coronavirus.”

In Afghanistan, women make up about 30 percent of the workforce, removing many of them from situations in which they might be exposed to the virus in the first place.

That explanation, however, doesn’t account for cases like Sediqa’s and Sharifa’s, who were most likely infected because their husbands carried the virus back home.

All of this brings into sharp focus just how much hangs in the balance for Afghan women as the government holds peace negotiations with the Taliban, a process that includes just a handful of female delegates representing the government side.

So far, the Taliban have been vague about whether they would support women’s right to receive an education and join the workforce, leaving many women worried that a peace deal might push them back into the shadows.

“From 2002 onward, there was some meaningful investment with regard to women’s empowerment,” Ms. Dalil said. She recalled that during her time at the ministry of health, the government made a conscious effort to deploy more female midwives in hard-to-reach communities and rigorous vaccination campaigns.

But now, with the pandemic further stressing a delicate system and widening the schism between those who receive care and those who don’t, she added, “I’m worried about the progress that has been made.”