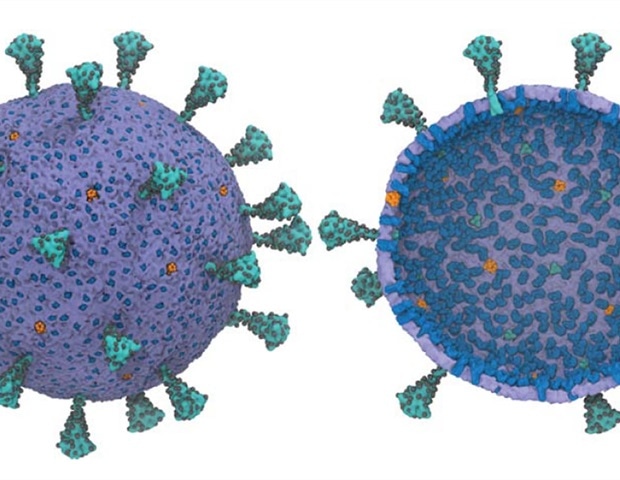 A team of scientists of the University of Chicago and the University of California San Diego has developed a coarse-grained (CG) model of the severe acute respiratory syndrome coronavirus 2 (SARS-CoV-2) virion. The model can be used as a valuable resource to perform multiscale simulations of the SARS-CoV-2 virion. The study is currently available on the bioRxiv* preprint server.

SARS-CoV-2, the causative pathogen of the coronavirus disease 2019 (COVID-19) pandemic, is a positive-sense single-stranded RNA virus with a genome size of 30 kb. To obtain a detailed overview of SARS-CoV-2 viral proteins and their functions, many structural biology studies have been performed using cryo-electron microscopy and x-ray crystallographic techniques. Simultaneously, many computational biology studies have also been done to predict unresolved genome regions using multiple protein folding algorithms. However, given the difficulty in simulating biomolecules at atomic resolutions, all-atom molecular dynamic simulation of various viral processes, such as virion assembly, budding, entry, and fusion, is fundamentally a challenging task.

Viral proteins of SARS-CoV-2. The genome of SARS-CoV-2 is shown in the top panel. Nonstructural proteins (NSPs) encoded in the open reading frame (ORF) 1ab are colored in orange, and the full genome is in teal. (A) All-atom models of the structural proteins of SARSCoV- 2 consisting of the S, E, M and N proteins. Asterisks indicate homology modeled protein structures for E and M (34). (B) Schematic of the virion surface from cryo-EM images of the virion, adapted from Ref. (19).

Complex biological systems, such as virions, are difficult to capture by all-atom simulations as well as experimental methods because of a wide range of physical and chemical transitions involved. The same is true for complex biological processes that involve multiple conformational changes. For example, the proteolytic cleavage of the SARS-CoV-2 spike protein results in a large conformational change, which is essential for the interaction between the viral spike protein and host cell angiotensin-converting enzyme 2 (ACE2), as well as the insertion of the fusion peptide into the host cell membrane. However, such large-scale biological events are difficult to be captured through all-atom simulations might be because of longer timescales or free energy barriers.

In contrast to all-atom simulations, CG methods allow simulating complex biological processes at various granularity levels. CG models can be developed from all-atom models (bottom-up) by reducing the dimensionality of all-atom models into a reduced number of pseudo-atoms and averaging out fast local motions.

In the current CG model of the SARS-CoV-2 virion, a particle-based phenomenological simulation was used to describe the lipid envelop, and membrane and envelop proteins were modeled as rigid bodies. Moreover, relative entropy minimization methods based on microsecond all-atom spike protein simulations were used to describe intra-spike interactions.

An All-atom simulation of the helical oligomer-RNA complex was used to develop the nucleocapsid protein model. Attractive Gaussian potentials between lipid tails and transmembrane protein domains were used to simulate the interaction between lipids and structural proteins.

The CG model developed in the current study is a preliminary form of the virion, which can be advanced over time with the availability of new all-atom simulation data and experimental structural data of various SARS-CoV-2 proteins.

CG models of various viral proteins can provide essential information about a wide variety of viral mechanisms, deciphered experimentally to develop therapeutic interventions. For example, CG models of the human immunodeficiency virus (HIV) have been used previously to understand the capsid self-assembly and to identify inhibitors of the viral activity.