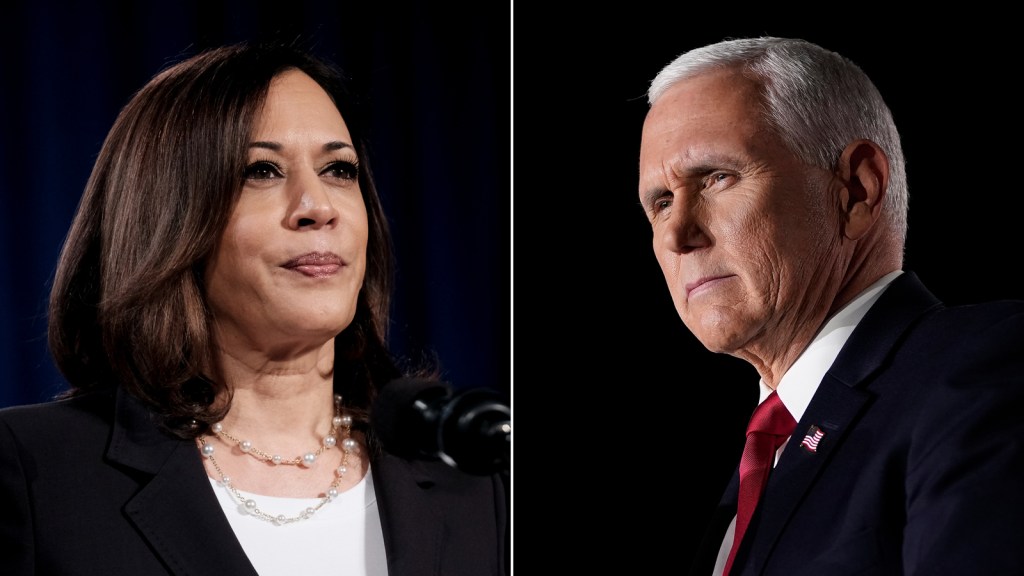 “This election is very little about changing people’s minds. Most people are where they’re going to be,” said Debbie Walsh, director of the Center for American Politics and Women at Rutgers University. “The question is, can part of what she contributes be getting women out to vote starting now?”

During the debate, all eyes were on Harris, the former San Francisco County prosecutor and California attorney general who made a shout-out during the debate to her Oakland roots. Although a former presidential candidate herself, she needed to prove that she could stand up to Vice President Pence and that she is competent and qualified to step up to the presidency if something were to happen to running mate Joe Biden, the former vice president who would be 78 were he to take office in January.

But perhaps more scrutinized than their forceful rebukes on policy — and an errant fly landing on Pence’s head — was the gender dynamic between Harris and Pence, and moderator Susan Page of USA Today.

After watching the pair face off, some women said the former Indiana governor came across as patronizing. Pence repeatedly interrupted Harris and routinely ignored Page’s attempts to cut him off when he spoke past the debate’s agreed-upon time limits.

“He is condescending to women,” Sherry Bebitch Jeffe, a longtime political analyst in the Golden State, said of Pence. “I resented the fact that he hardly ever acknowledged Susan Page until he was finished saying what he wanted to say, regardless of the timing.”

It wasn’t just women who recognized the behavior.

“One takeaway from tonight’s debate will be how many times a woman of color, always smiling pleasantly, has to tell a white man, ‘I’m speaking,’ in order to STILL get less time than he gets. It is nauseating,” tweeted writer/author Mark Harris.

Harris responded to Pence mostly by smiling. She looked incredulous at times but never got angry. And on more than one occasion, in the face of Pence’s reactions, she said firmly, “I’m speaking” — a quote that was quickly emblazoned onto campaign T-shirts.

To Republican state Sen. Melissa Melendez, of Riverside County, and other conservatives, however, it was Harris who was “off-putting.” In a tweet during the debate, she wrote, “this is fun. Kamala Harris has absolutely zero self control.”

In an interview Thursday, Melendez criticized Harris’s facial expressions on the split screen as a “distraction.”

“Voters including myself wanted to see things taken a little more seriously,” Melendez said. “It’s hard to see when someone is shifting around in their chair and making faces and rolling their eyes. It comes across as someone who’s very emotional, rather than being a little more pensive about the topic at hand.”

Walsh from Rutgers said, however, that it was Pence who needed to worry more about the gender gap than Harris.

The candidates’ positions on the issues were also important in appealing to women, she said. Women are more likely to support Democrats than men, she said, partly because of the party’s platforms on economic issues and women’s increasing need for a social safety net.

“Women are more economically vulnerable, make less and have less saved for retirement,” Walsh said. “They are more employment insecure, and certainly we are seeing women bearing the brunt of the COVID crisis, economically and caregiving.”

Polling suggests that support for the Trump/Pence ticket is eroding among women without a college degree. Trump critics say it isn’t surprising considering his debate performance last week and his penchant for referring to suburban women as “housewives.” Hillary Clinton lost the group to Trump four years ago, but Biden appears to be picking up support from the demographic.

Both national polling and polling in swing states such as Pennsylvania and Florida show a real gender gap, with Biden polling significantly better than Trump among women.

An early October Fox News poll of 1,012 registered voters across the country showed men split between the candidates — with 49% favoring Biden and 48% supporting Trump. But the same poll showed women were much more divided, with 57% of women favoring Biden and just 38% favoring Trump.

There are stark racial and educational differences, as well. While nearly half of White women (48%) favor Trump, according to an early October Fox News poll, just 10% of non-White women support the current president. Fox found that more than half of White women (53%) without a college degree back Trump, while just 38% with a degree support him.

It also appears there was a gender gap within a gender gap. According to a fivethirtyeight poll, men appeared to be less put off by Harris’ debate performance than women were by Pence’s.

Whether Harris’s presentation will get out the vote remains to be seen. But Zina Slaughter, of Richmond, an alumnae like Harris of Alpha Kappa Alpha sorority, says she is proud that Harris stood up for herself during the debate, made strong points on the issues of health care and the pandemic and successfully walked the tightrope that women often face between being “aggressive” or “assertive.”

“She needed to be strong and resolute in her position,” Slaughter said. “It was important to show him and the world that she’s still speaking and she had points to be made and should be made.”

And when it comes to the election? She and her sorority sisters, more than ever, she said, are fully mobilized to get out the vote.