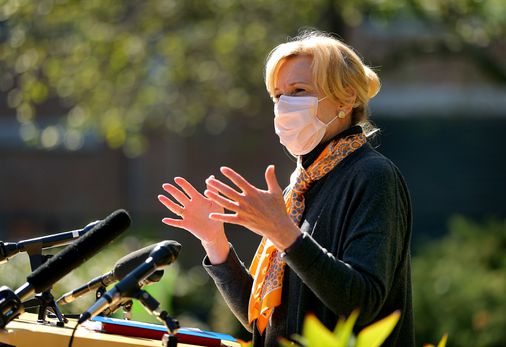 The frequent, recurrent testing on college campuses should serve as a model for communities at large, she said, so they can detect cases as quickly as the schools.

“It gives me really great hope to see how the college students have modified their behavior because they know what it takes to be safe,” she said. “And they have been able to mostly keep themselves safe with very low test positivity rates.”

Birx commended the Broad Institute for its key role in testing in the Northeast. Soon after the crisis began in March, the lab converted its laboratory into a high-throughput COVID-19 test processing center.

This spring, the institute signed contracts with 108 public and private colleges in the region to provide testing for students, faculty, and staff. Among the 1.7 million tests conducted for the colleges and universities so far, the positivity rate is 0.1 percent, or approximately 1 in 1,000, according to the Broad. The most recent seven-day average positivity rate for the state is 1.0 percent, according to the Department of Public Health.

The Broad collects samples from the schools and processes the tests for $25 per test, a discounted rate set for the schools compared to the $35 to $50 the institute regularly charges.

Birx also toured the testing facility that Boston University has set up on its campus. That institution tests many students twice a week. She was also expected to meet with Governor Charlie Baker later on Friday.

About the Thanksgiving and winter holidays, Birx said she hopes that if college students return to their communities they will have low positivity rates and bring home with them good public health strategies that they learned at college.

If and when students return to campuses after the winter holidays, she said schools should aggressively test and quarantine them as they did when students began school in the fall.

Public spaces and stores and restaurants in the Northeast have largely become safe because of vigilant mask wearing and social distancing, but the problem now is at home, she said.

“People are yearning to be together and believe that if I know you or you are my family member you couldn’t have asymptomatic COVID. And we now learn that you could,” she said.

Birx, a strong supporter of wearing masks, distanced herself from President Trump, who even after testing positive for COVID-19, has been seen at the White House without a mask and plans to resume campaign travel this weekend.

As fall turns to winter, she said, flu vaccines, masks, and distancing will only become more crucial.

“I welcome vibrant discussions in [the White House coronavirus] task force, but I think it is critical not to confuse the American people,” she said.

Birx said she has been on the road lately but was at the White House two days last week and was tested each time.

“[The president] has his own public health advisors for his own health. I’ve made it clear about what I think is critical for each of us to stay safe,” she said.