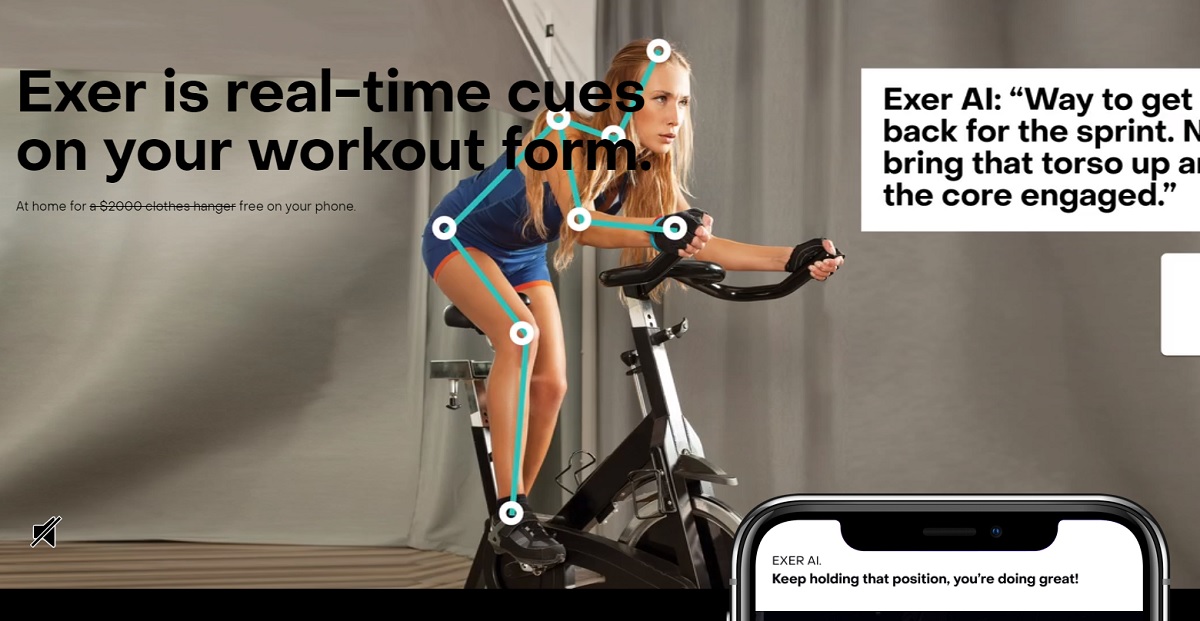 Exer Labs has raised $2 million in funding and unveiled its AI and computer vision Exer Studio app for the Mac. Exer Studio captures your movements for coaching advice and offers Peloton-style leaderboards for workouts.

The Denver-based fitness startup captures your movements with your laptop’s camera and evaluates your form. It can share your results with friends, fitness coaches, or others to see where you rank on the leaderboards, motivating you to work harder or faster.

CEO Zaw Thet said in an interview with VentureBeat that Exer relies on edge-based AI (meaning it uses your smartphone’s computing power) and computer vision to power its motion coaching platform. It offers real-time audio and visual feedback on almost any type of human motion via a Mac (and its camera), without having a human in the loop. The mission is to help people move, train, and play better. Coaches can use the app for classes and see who needs help.

“Gyms have closed and are having trouble opening back up,” Thet said. “There are more than 300,000 professionals who aren’t able to train people in person. They have switched to streaming workouts, but it’s hard to keep people engaged on Zoom.”

Fitness in the pandemic 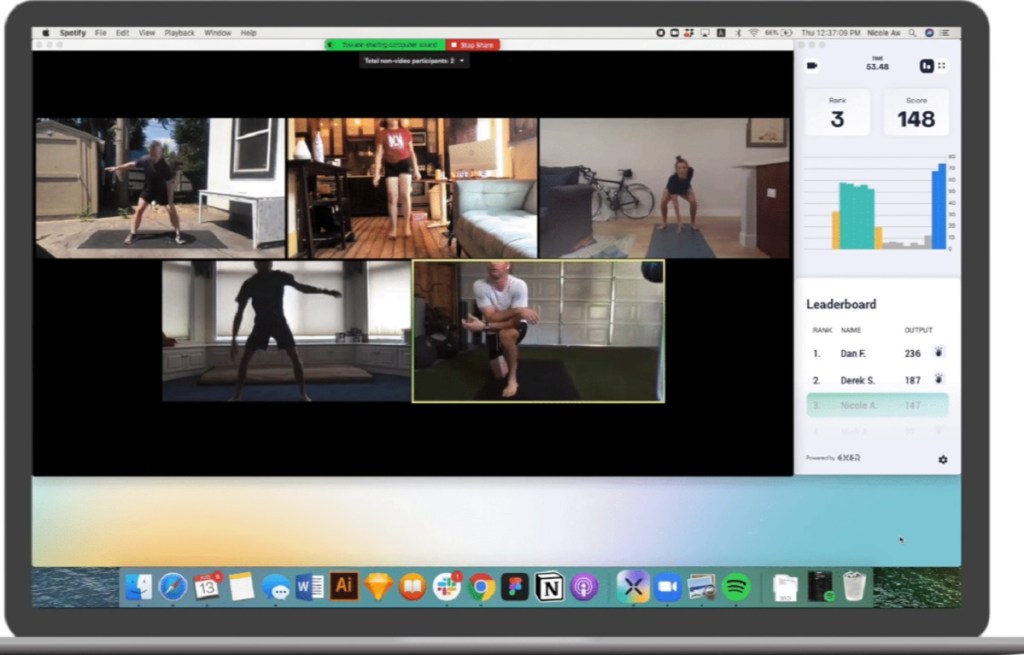 Above: Exer Studio can track movements for people doing workouts.

Thet said the Mac app uses the camera to capture your movements, so it knows how many repetitions you’ve done and whether your form is correct. It compares your results to a Peloton-style leaderboard, and you can see in real time whether you’re on the right track. The app can also use voice coaching to tell you how to fix your posture so you get the most out of your workout, Thet said. Peloton has become very popular during the pandemic, as people turn to online fitness, and Thet hopes Exer Studio can help coaches dealing with the loss of clients and income.

“It’s something we can do now when you can’t go to the gym,” Thet said.

The pandemic has made virtual workouts a necessity, as 60% of fitness consumers are hesitant to return to in-person gyms. Thet noted that something like 300,000 fitness professionals are out of work or can’t coach at gyms due to the pandemic. Exer Studio’s enhanced virtual workouts can help coaches retain and grow their communities by enhancing their digital offering with something more exciting than a standard Zoom call. Real-time workout data, post-workout summaries, and competitive session leaderboards give consumers the feedback they’ve missed, Thet said. 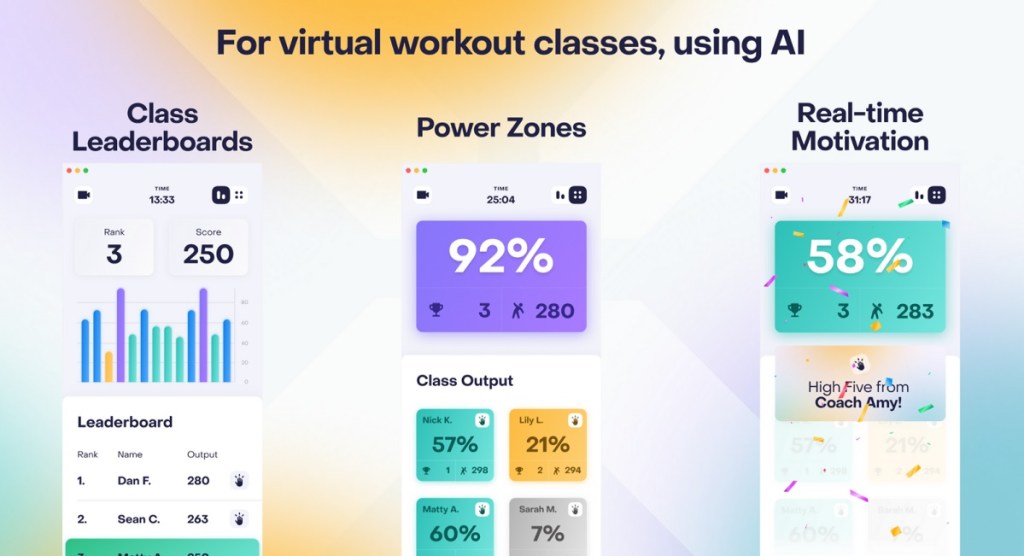 Above: Exer can measure how you’re doing on your workouts.

“We’re really trying to democratize health and wellness,” he said.

Exer previously launched its iOS app, Perfect Plank, to coach people on the correct form for doing planks. The company also has a beta version of its physical therapy app on iOS. The apps are currently free for coaches while in beta training, but the company will adopt a software-as-a-service model, Thet said.

The tech is pretty cool. Exer’s AI tracks motion and form using cameras on the devices that people already have on laptops or smartphones. The AI performs real-time motion tracking on 18 to 20 body points to generate a score. For everybody in the class, the instructor can see how hard each person is working at a glance. And the instructor can send a high five back to individuals or the whole class.

The app works with MacOS 10.13 or later, and it is coming to all browsers and other devices soon. The coach’s interface is web only, so the coach doesn’t need to use a Mac. Future versions will capture your repetitions. When you are doing a workout, you can pit yourself against someone who has a high score on a leaderboard. Your output score tracks closely to calories burned. Your “Power Zone” percentage score reflects your current effort level.

“We found that most coaches use laptops for their training sessions,” Thet said.

Thet is a serial entrepreneur, having also cofounded and served as CEO of 4INFO, one of the first and largest mobile advertising platforms in the world. In 2011, he was selected as one of 10 entrepreneurs to serve on the United Nations Foundation’s inaugural Global Entrepreneurs Council, where he is now an emeritus member of the board.

Cook is the founder of Frontier Labs, which was acquired by Exer in 2019, and a founding member of Twitter’s mobile team, where for six years he helped build and perfect the app across every major mobile platform at mass scale.

Gehde has a background in kinesiology and fitness. The founder of e3 Fitness in Denver and a trainer and mentor for nearly two decades, he touts the e3 Program as a breakthrough that has helped dismantle barriers to maintaining an ongoing fitness plan. His training programs have helped everyone from fitness enthusiasts to professional athletes.

Exer has been recruiting coaches as evangelists, including veterans Kyle Bergman, Angela Lou, and Keisha Saddler.