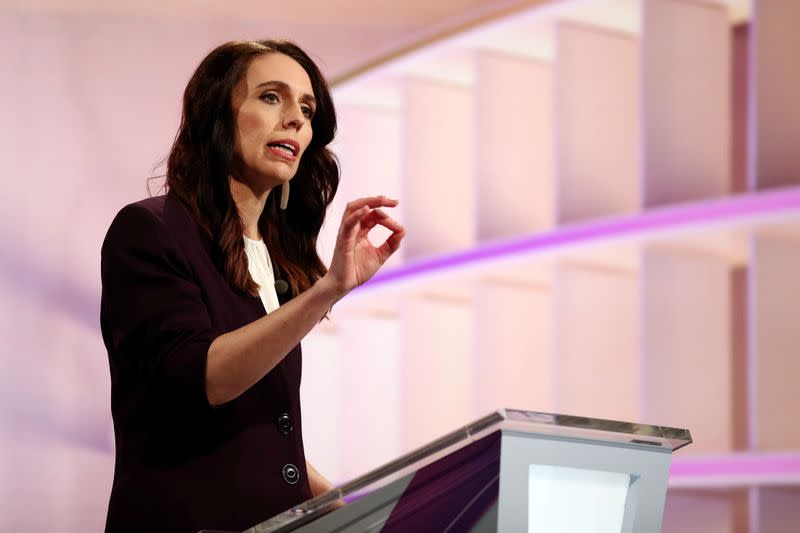 Alarm bells pealed in August when official data showed about 90% of people who left their jobs in the April to June quarter, at the peak of the country’s coronavirus lockdown, were women. While the unemployment rate for men fell 3.6% that quarter, the women’s measure surged 4.4%.

The data crystallized a global trend of “shecession”, with sectors worst hit by the pandemic, such as hospitality and tourism, dominated by women.

In response, both Ardern’s Labour Party and Collins’ conservative National Party have put the male-dominated infrastructure industry at the heart of their coronavirus recovery plans, promising more construction and jobs.

Ardern referred to “double duty” in a recent leaders’ debate, saying a building boom would both employ skilled workers and create new training programs – encouraging women to join the sector.

“These are high-skilled, high-wage jobs that have good prospects attached to them,” she said. “Why shouldn’t our women take them up?”

Yet with women representing fewer than 3% of the construction industry workforce, and few commitments for teaching, healthcare and care-giving professions, where women form majority of the workforce, critics say it is far from enough.

“All of the economic responses and stimulus packages seem to be about ‘shovel ready’ projects, and even this wording gives a connotation of male dominated industries, if we are going by gender stereotypes,” said Lawrence.

“Now we need to make sure that the huge investments in retraining and trades-training is accessible to women and is meeting the needs of women who may have lost their job due to hospitality and tourism being affected by COVID-19,” Genter said.

National said its policies included working with the private sector to promote women to senior management positions, providing a one-off payment to pregnant women to provide post-natal support, and investing in retraining programmes to get women get back into the workforce.

While Ardern is widely expected to win the Oct. 17 election, recent polls have indicated a shift away from both Labour and the Nationals to the minor parties, including the Greens.

A closely watched 1News-Colmar Brunton poll on Sept. 28 showed support for Labour had dipped to 47%, which would leave the party two seats short of the 61 needed to form a majority government. Support for the Greens rose to 7%, which would give it eight seats.

Under New Zealand’s mixed-member proportional electoral system, that result would force Ardern to lean on the Greens to form government, with the junior party then taking up the deputy leadership and other key cabinet positions.

More than a century after New Zealand women became the first in the world to win the vote, they continue to exercise the right more than men, making their support critical.

Ardern was able to form government in 2017 partly on the back of a swing to Labour by female voters who celebrated the elevation of a fresh, young dynamic woman fighting against a male-dominated opposing political team.

Support has grown during Ardern’s first term, in which she became only the second woman in the world to give birth while in elected office. She won global praise for both her decisive yet compassionate handling of the 2019 Christchurch mosque attacks and her swift action this year to successfully contain the COVID-19 outbreak in New Zealand.

Political commentator Bryce Edwards of Victoria University in Wellington said that strong record meant the Labour party simply did not need to take any risks with new policies or ideas heading into the election. Ardern’s government passed abortion law reforms through parliament earlier this year and has promised to tackle so-called “period poverty”.

“They are running a conservative election campaign,” Edwards said. “Ardern is well aware of New Zealand voters. She does not want to be painted as a feminist or disparagingly called ‘woke’, and be targeted as a liberal elite.”