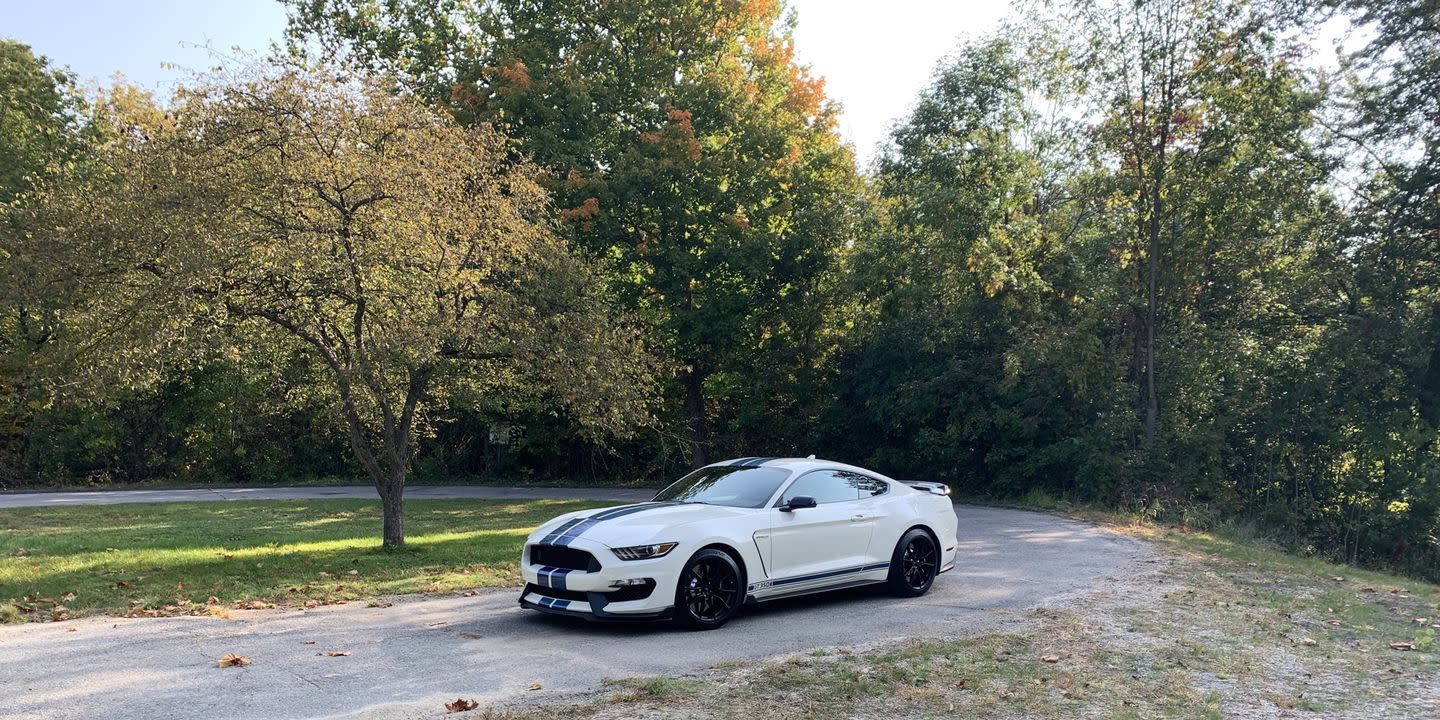 Ford officially announced that it is ending production of the Mustang Shelby GT350 after the conclusion of the 2020 model year vehicles. And that’s a shame because it is a fan favorite. 526 horsepower from a 5.2-liter V8 is already cool. The fact that it spins to 8,250 rpm and uses a flat-plane crankshaft made it a true marvel. And it’s much more than straight-line muscle. Ford built a real handler, more adept to a racetrack than any other Mustang trim.

In an attempt to exit gracefully, Ford put together a special styling package called the Heritage Edition. This package uses Wimbledon White paint to coat the body before two racing strips in Guardsman blue run the length of the vehicle. Furthermore, front and rear exterior badges also come in Guardsman blue as well as a unique dash badge. The Heritage Edition is available on both GT350 and GT350R models. The price for the package is $1,965.

The price is a cue to the heritage of the Heritage Edition. As those were the colors of Carroll Shelby’s 1965 race car that Ken Miles raced to victory in February of that year at Green Valley Raceway in Texas. Shelby and Miles sounds familiar. Those colors also represented the U.S. as its assigned racing colors.

Most importantly, it looks good. It’s cool. Understated, well as much as it can be in such a loud car. And thank goodness it’s loud because the noise is so good! That V8 is simply magic. Intuitively, you reach 7,000 rpm and feel an urge to shift. Resist that urge and hear the motor that must’ve been ripped from a Cup car scream, 8,000 rpm arrives, wait—8,250 rpm. Bang! Shift and start all over again. It’s absolutely intoxicating.

And while that motor is great. The real magic is the natural, analog, full of feel handling. The GT350 is a real corner cutter. You get immense grip, a nimble front-end for transitions, and excellent communication skills between car and driver. The GT350 may prove to be one of the best driver’s cars ever built. You get modern equipment for great engine power, brilliantly tuned adjustable shocks and mega grip tires.

You also get “old-school” tech in the right places: six-speed manual transmission, naturally aspirated engine, and really good feedback through the steering wheel and seats. And those seats are Recaros that hug your body tight, which is a good thing because the Michelin Pilot Cup 2 tires hold the road better than anything with a tread pattern.

These traits together often become intimidating, but because the GT350 provides all that feel, it’s not here. You just go faster, feel the g’s and smile ear to ear.

Being a Mustang, it’s not as refined as a Porsche, more raw, but that ultimately adds to the appeal. It’s born out of a race car, after all and raw in the right way. It’s as if Ford just throws a license plate on its GT4 race cars and send them to the dealers.

The Heritage Edition in of its self doesn’t mean much. And that’s a good thing for two reasons. First, it means Ford didn’t screw the car up. Second, it looks sharp. The white paint with blue racing strips don’t add an over the top, look at me flashiness to the car. Or maybe it does, but because it’s so much fun to drive you don’t notice.

No matter, this Mustang is a gem, an absolute darling to look at, listen to, and drive. Going out in style, indeed.

Having something to say? Say it! Sign up and leave comments below.