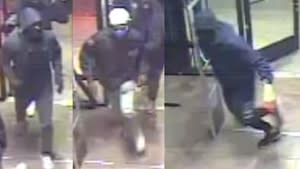 Gunfire drew the attention of the police officers to a Memphis clothing store during the early morning hours of Tuesday, May 31, according to the Memphis Police Department (MPD).

MPD said officers responded to a shooting call at Village Mart Clothing and Footwear on Covington Pike around 4:15 a.m.

When police arrived at the scene, they were told at least 10 people had broken into the store and stolen about $60,000 worth of merchandise, according to MPD.

Memphis Police released pictures of the alleged burglars and asked anyone who might know anything about the stolen goods or the people responsible to call Crime Stoppers at 901-528-CASH.

Any information which leads to an arrest, in this case, could be worth up to $2,000.

Download the FOX13 Memphis app to receive alerts from breaking news in your neighborhood.