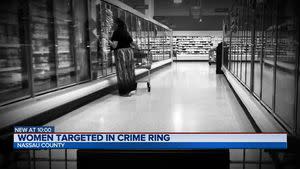 A crime ring in Nassau County is targeting women, and now the Sheriff’s Office is trying to get the word out before it’s too late.

At least five people are involved. Ten different agencies in Florida and Georgia are involved in the investigations, with over 30 incidents reported so far.

“There is an organized ring operating throughout the state of Florida and sometimes even as far north as Georgia.”, said Nassau County Detective Ivan Pinkston.

“I like to think that we are very friendly town so it’s unfortunate that they are praying on that.”, said Nassau resident Jennifer Hagens.

Three men and two women were caught on surveillance at a Nassau County Publix store. Video shows the group enter the store, and all are on the phone.

They find a victim and surround her in an aisle. While an older woman asks the victim about an item, taking her attention from her purse, the younger suspect snatches her wallet.

“Once they grab the card they have access of thousands of dollars before the victim even knows their wall is missing.”, said Detective Pinkston.

Timestamps from the video show it takes the suspects just 11 minutes. They take credit cards and buy expensive electronics and gift cards. At least six incidents have been reported in Nassau County since January.

“Make sure your purses on you at all times. Make sure it’s closed. In a majority of the cases the females are leaving their purses unattended in the shopping carts.”, said Detective Pinkston.