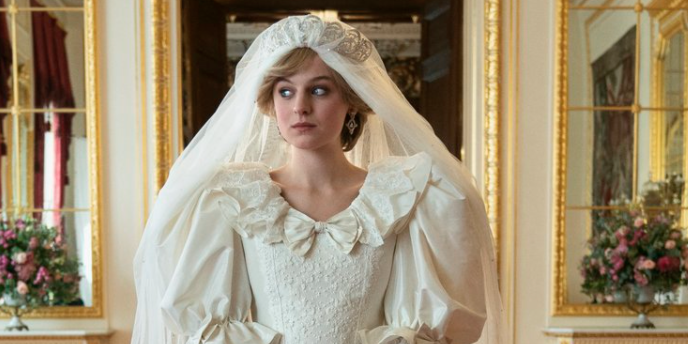 On July 29, 1981, the world met one of the most iconic wedding dresses of all time: the dress that Lady Diana Spencer wore to marry Prince Charles at St. Paul’s Cathedral in London. That dress, designed by David and Elizabeth Emanuel, became legendary for several reasons, one of which being its seemingly endless, dramatic train (it was 25 feet long).

This sartorial feat will make another appearance in The Crown season 4, and fans of the show finally get a first look at the recreation. Netflix released an image of the gown being worn by actress Emma Corrin, and every last detail, down to the ruffles, appears to be there:

The dress was designed by Amy Roberts, who Netflix said “wanted to pull in many of the style choices and create the same spirit of David & Elizabeth Emanuel’s original design, but make something new. Without access to the original patterns, Amy collaborated with David Emmanuel. He was enormously helpful, talking the design team through the detail of many of the original drawings to help them create this gown for Emma Corrin. Four months and five fittings later, with three people spending a collective 600 hours working, they had a dress. It’s made of 95 meters of fabric and 100 meters of lace, with a train that is approximately 30 meters long.”

Netflix will release The Crown season 4 on November 15.