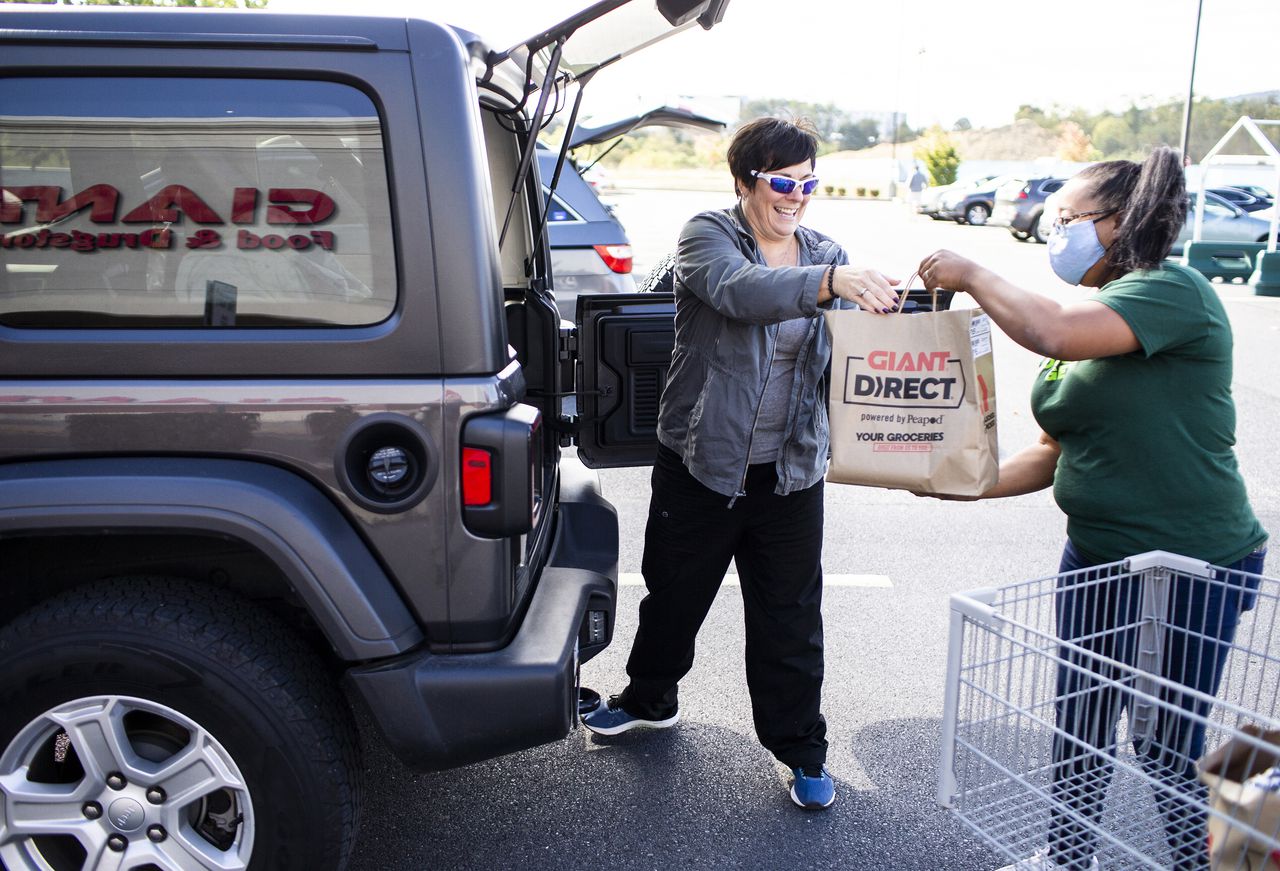 Laura Rowe has set foot in a grocery store twice since March.

The Hampden Township mother of three children recently settled back into a weekly shopping routine after months of relying on Instacart delivery and curbside pickup at Weis Markets. It’s easier now that two of her children are back in school.

“We’ve been stuck at home with the kids and trying to limit our exposure,” Rowe said. “There were a lot of unknowns. We were trying to stay safe and keep everyone at home.”

A lot has changed since the early days of the coronavirus pandemic when shoppers rushed to supermarkets to stock up on toilet paper, wipes and hand sanitizer. Others, cautious about venturing out, turned to online searches for curbside pickup and delivery options.

For the first time in decades, Americans were spending more on groceries as dining habits shifted away from eating out at restaurants, sports stadiums and concerts to meals prepared at home. Grocery stores compared the surge to being slammed by multiple snowstorms.

In addition, nearly 40% of shoppers surveyed said they were visiting fewer stores and spending more. Weekly grocery bills climbed to $120 to $161 between March 21 and April 2, eventually leveling off at $130 in late April.

“I don’t think we’ve seen anything like that up to this point,” said Alex Baloga, president and CEO of the Pennsylvania Food Merchants Association. “There certainly have been disruptions over the years at times, and certainly there have been disruptions over a brief period of time, whether a storm or weather event, but never anything to that degree.”

While demand has leveled off, the pandemic has brought drastic changes to food shopping habits. More shoppers are relying on the click of a computer button to buy groceries. They’re also purchasing more comfort foods and ready-made-meals and becoming more strategic about shopping.

As people sheltered at home, the pandemic accelerated the use of curbside pickup and delivery options, considered a safer, convenient alternative to physical stores.

Shoppers embraced the platform in record numbers. Monthly online grocery sales climbed from $4 billion in March to a record-setting $7.2 billion in June, according to a study by Brick Meets Click and Mercatus.

In April, grocery delivery platform Instacart reported orders had quadrupled over the previous year, while Shipt, a delivery arm of Target, reported “record-breaking” demand, according to the Washington Post. Instacart founder Apoorva Mehta told the Post the platform more than doubled its workforce from 200,000 to 350,000.

Supermarkets, crushed by demand, were caught off guard.

“It made it, instead of a down-the-road issue, an immediate issue,” Baloga said.

Many central Pennsylvania grocers stepped up online, click-and-collect ordering platforms by hiring more employees and expanding the availability of pickup and delivery slots. Although, some shoppers reported snags such as websites crashing under demand and long waits for slots.

Ron Bonacci, vice president of marketing and advertising for Weis, said the chain initially experienced a backlog of orders that shifted from a 24-hour window for pickup to upwards of four days. Online ordering through its Weis2Go platform grew 200% and has since leveled off at 150% over normal capacity, he said.

“We were in a good place because we were already ramping up all of our e-commerce, curbside and delivery,” he said. “But we didn’t anticipate the flood [of orders].”

At Giant, John Ponnett, senior vice president of retail operations, said the pandemic fueled enhancements to Giant’s nearly two-year-old grocery Direct curbside and delivery program. For one, Ponnett said Giant expanded the number of available slots at stores, so shoppers could schedule pickups within a widow of several hours to days in advance.

“It has grown because we were ready for it, but it has also grown because COVID has brought it to the forefront of their minds,” Ponnett said.

While Giant noticed a significant surge of online shopping, Ponnett said shoppers are now toggling between the service and traditional brick-and-mortar shopping, with both platforms offering similar values.

David Bishop, partner and research lead with Brick Meets Click, told Digital Commerce 360 online ordering is more widely available than it was before the pandemic.

“Many grocery retailers have demonstrated amazing agility since the health crisis started, building surge capacity to better meet the astronomical growth in demand for shopping online,” Bishop said “This increase in online grocery capacity has flipped the equation. Today, as shoppers have more choice, the increased capacity is now actually enabling the continued growth of online grocery.”

What shoppers are buying

Shoppers have opened their wallets to buy everything from indulgent snacks to healthy foods during the pandemic.

At Karns Foods, shoppers gravitate toward comfort foods such as macaroni and cheese and mashed potatoes. This summer, Scott Karns, the chain’s president and CEO, said they sold more s’more making ingredients – chocolate bars, graham crackers and marshmallows – than any summer in recent memory.

Sales of Halloween theme chocolate and candy are up 13% over 2019 in the four weeks ending Sept. 6 according to the National Confectioners Association.

“Shoppers have gone back to core buying, items that make them feel comfortable,” Karns said.

Weis has witnessed a similar trend. Bonacci said meat and seafood sales have climbed, likely a consequence of fewer people dining out. They’re not just buying ground beef, he said but also pork and chicken, while sales of shrimp as well as tilapia and salmon have grown.

Weis also noticed a spike in sales of healthier items such as apples and oranges as well as organic products.

“A lot of people got health-conscious because the pandemic makes you rethink about your life and everyone started buying a lot more healthier foods,” Bonacci said. “The consumers continue to think out of the box – what is the new normal – and they are adjusting their lifestyles.”

The pandemic pushed people into their kitchens. Interest in baking surged and led to shortages of yeast and all-purpose flour. Google reported recipe searches reached an all-time high. (According to one outlet, the top search among Pennsylvanians was egg salad.)

As people dine out at restaurants less frequently and work from home, they’re increasingly whipping up a meal at home. In fact, about 55% of those polled by sales and marketing company Acosta said they are eating at home more often since March.

“It has been quite interesting to see that shift of customers looking to have meals from home and how they engage with meal solutions and meal bundles,” Giant’s Ponnett said.

“People have come home to experience a meal around the table,” he added.

Giant launched a “For Today’s Table” campaign that include television ads featuring real families gathering around dinner tables. The chain is also offering more ready-to-prepare meals such as a “Cook-In-A-Bag” line with lemon dill scallops, Chesapeake Bay shrimp, a triple mustard and honey roast and Jamaican jerk roast that can be cooked in an oven or Crockpot.

While many crave comfort food, Ponnett noted some shoppers are becoming more exploratory with meal choices, whether it be Asian or Mexican dishes. Shoppers are learning the same opportunities at restaurants also exist at home, via grocery shopping.

“I think it has been a much bigger level of exploration to bring to the dining table,” he said.

In some cases, shoppers might have a hard time finding certain products but grocers urge there are no supply issues like what occurred in the spring.

Food manufacturers have reduced their portfolios to focus on top-selling products, and as a result are replenishing the supply chain depleted earlier in the year by the crush of shopping. Companies such as General Mills, Conagra, Kellogg’s and Campbell’s are also focusing on core products and not seasonal, new and specialty products.

For example, Bonacci said Heinz used to produce three sizes of ketchup – 12, 18 and 24 ounces – and has temporarily cut the 18-ounce size to maximize production.

Shoppers like Nicole Miller of East Pennsboro Township are taking a more tactical approach to shopping. Among her strategies, she is making fewer trips and placing more effort on finding deals in the meat department to stock her freezer.

“Today, when I check out I’ll feel like I spent a lot but I’m not coming back for two weeks,” Miller said.

Whereas, everyone used to shop multiple times a week, even visiting several different grocery stores, Weis’ Bonacci said they have become more efficient, probably in an effort to be cautious and limit exposure.

Karns said the number of shoppers per week at his stores has dropped off by about 7% over a year ago. But that doesn’t mean they aren’t shopping.

At the beginning of the pandemic, people had one thing on their minds – availability of products such as toilet paper. Now, as supply chains ease up, Karns said shoppers are following sales flyers and promotions and entering stores with lists.

Karns said he suspects it might have to do with stocking up again or needing to save money.

“I don’t know if people are feeling more nervous about not having the funds. I’m not sure if it is related to job insecurity,” he said.

For now, grocers have their eyes focused on the future. While there is potential for a possible second coronavirus outbreak, the holiday season from Thanksgiving to New Year’s Eve is expected to be different than past years.

“The holidays are going to be a big question mark,” Karns said.

He guesses holiday gatherings will be smaller and fewer people will be reserving tables at hotels and restaurants for Thanksgiving Day buffets and meals. Suppliers have warned him demand for items such as Stove Top Stuffing and baking ingredients, could be high.

As a result, Karns is promoting sales of Thanksgiving ingredients earlier than usual, and hopes by doing so, shoppers will stock up early and ease the traditional crush of shoppers that descend on stores in the days leading up to the holiday.

At Weis, Bonacci said they have been ramping up inventory and product supplies such as baking ingredients, frozen items and some products centered around Thanksgiving Day such as turkeys and hams and paper supplies.

Baloga noted the biggest concern right now among grocers is preparing ahead to the fall and ensuring product availability in the off chance of another resurgence or more restrictions. Grocery stores are always evolving and revamping and the pandemic has been no exception, he said.

“These are all things you have to do in retail to survive and the food industry is no different. The competition is fierce, it’s constant,” he said.