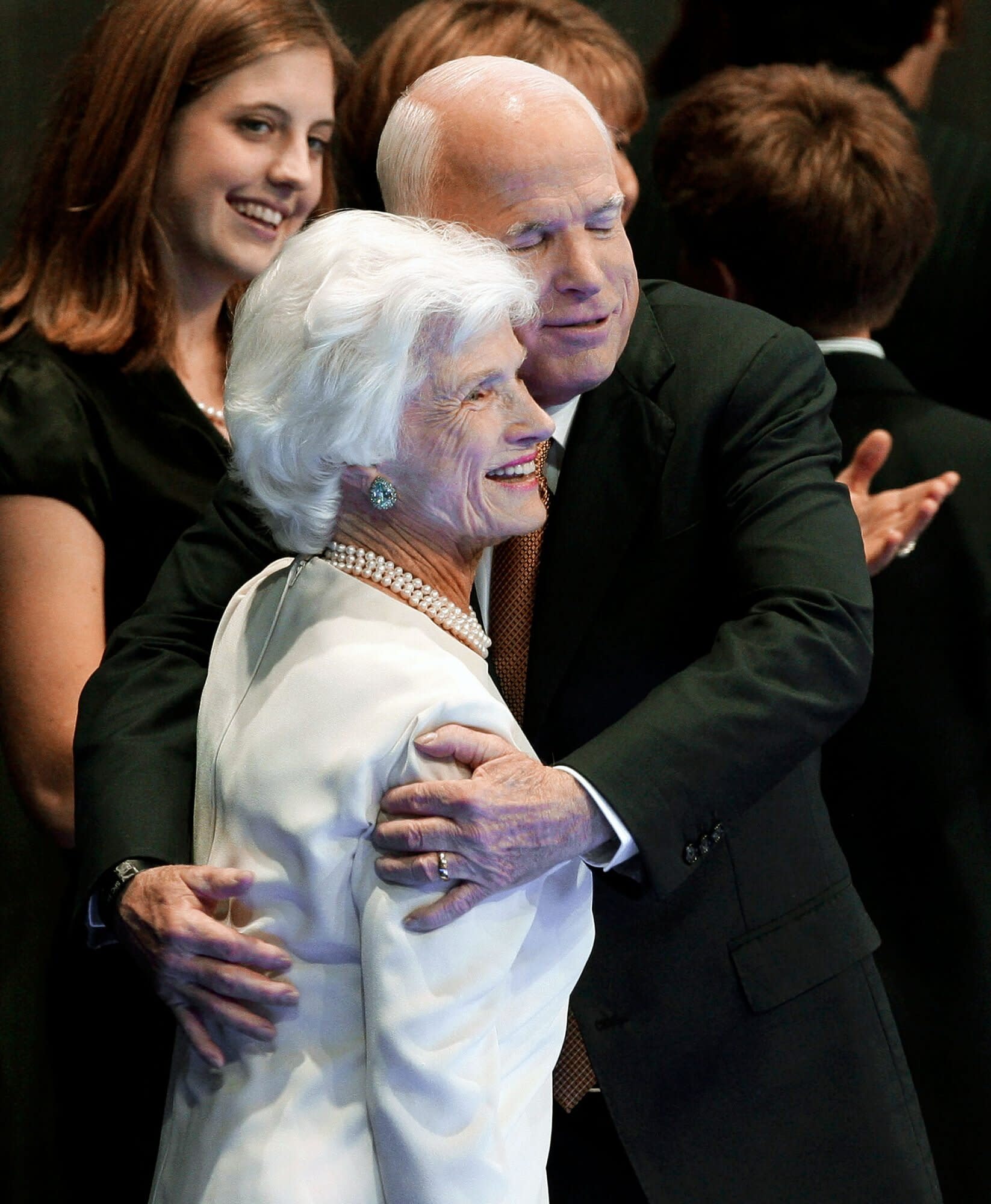 Americans became familiar with Roberta during son John’s 2008 presidential campaign, when the spry, elegant nonagenarian displayed her wry humor and derring-do with reporters and supporters at stops across the country.

During the fall of 2007 and riding in her son’s campaign bus, the then 95-year-old Roberta shared with PEOPLE one of more thrilling adventures — this one on the interstate in Flagstaff, Arizona.

She didn’t go unnoticed — but it hardly slowed her down: “I got a ticket for driving 112 miles per hour, signed my name and went on my way.”

Another enduring image of Roberta, the wife of a Navy admiral, emerged a decade later at John’s 2018 funeral following his death at 81 from brain cancer. A stoic Roberta sat silently in her wheelchair and held Meghan’s hand in the Washington Cathedral, comforting her granddaughter.

Five months later, Meghan wished Roberta a happy 107th birthday, writing in a tweet: “You are the epitome of strength and grace, an American treasure and one of my life role models. Thank you for showing me and so many others how to truly live life on your own terms.”

Roberta celebrated her last birthday this past February, after recovering from a pneumonia scare.

“This lady who is 108 today was born two months before the Titanic sailed, that’s how long she’s been around,” Joe, who was living with her to help care for her, told PEOPLE at the time.

Reflecting then on what he most appreciated about his mom, Joe said it was “all the things she knows, and she is very alert and always interested in stuff.”

Happy 107th Birthday to my grandmother Roberta McCain – you are the epitome of strength and grace, an American treasure and one of my life role models. Thank you for showing me and so many others how to truly live life on your own terms. I love you. ♥️🇺🇸♥️ pic.twitter.com/4K4tbQYqSb

On The View earlier this year, when asked if Roberta has shared her secret to a long life, Meghan recalled her grandma saying “her sense of humor.”

“People always ask me if she’s with it,” Meghan said then. “She watches the show, we talk about politics and life. And she’s just amazing … she loves life.”

Roberta had her own answer to her long life, telling Vogue 12 years ago: “I don’t do anything I’m supposed to do. I don’t exercise and today, I’ve already eaten a half a box of caramel popcorn.”

A native of Oklahoma, Roberta Wright was born in 1912 with an identical twin sister, Rowena. The pair would go on to share a lifetime of travel through their 90s.

“When they were about 96 or 97 they traveled all over the world together,” Van Susteren, 66, told PEOPLE in 2019. This included a stop in Paris, where the pair tried to rent a car but were told they were too old. So the sisters bought a little red BMW to drive all around Europe, recalled Van Susteren, and then Roberta shipped it home.

This lust for travel started young. Roberta’s father, who made enough money in oil to become a stay-at-home dad, took the sisters on numerous trips along the California coast, into the Mojave Desert and other sites to provide a priceless hands-on education.

When Roberta was a student at the University of South California, she met a handsome Navy ensign named John “Jack” McCain Jr. Roberta’s mother objected to her marrying a Navy man, so the pair eloped and married in January 1933 at Caesar’s bar in Tijuana, Mexico. “It was a real love affair, it really was,” Roberta told C-SPAN in 2008.

As the wife of a Navy officer often away on assignments, Roberta exerted a big influence over her three children.  They moved frequently — second child John III, the future senator, was born in Panama. Emanating her father, Roberta took her kids on trips that her son later called a “mobile classroom.”

“My mother was raised to be a strong, determined woman who thoroughly enjoyed life, and always tried to make the most of her opportunities,” John McCain wrote in one of his books. “She was encouraged to accept, graciously and with good humor, the responsibilities and sacrifices her choices have required of her. I am grateful to her for the strengths she taught me by example.”

During the Vietnam War in 1967, Roberta and Jack were in London and getting ready for dinner when the phone rang.  Roberta was told that their son John’s plane was shot down over Vietnam and no one had ejected from the aircraft. They believed John was dead — told “Johnny was gone,” she recalled on C-SPAN.

Soon after, Roberta learned John was a prisoner of war. “Can you believe that’s the best news I’ve ever had in my life?” she told C-SPAN.

John was held captive for the next five-and-a half years. Roberta turned to her faith to get through that time.

“If you can’t do something, don’t waste your time on it,” she told CBS News in 2008, “and I couldn’t do anything about that. I could maintain my dignity and the things that I’d always claimed that I believed in, God and my country.”

After her husband, who reached the rank of admiral, died in 1981, Roberta and her sister continued their world travels, sometimes three months at a time, usually driving themselves and living frugally, she told The New York Times in 2007.

They also let things unfold along the road without much planning, once starting off in Frankfurt, Germany, and ending up thousands of miles away in Israel — with Rowena at the wheel and Roberta as navigator.

“My sister never said to me, ‘You are absolutely the worst driver,’ ” Roberta told the Times. “She’s the quiet one. She always just went around to the driver’s side and got in behind the wheel.”

While on the road, Roberta and Rowena, who died in 2011, also maintained a gin rummy game that had gone on for decades. “We never settle up,” Roberta told the Times.

Speaking with Vogue a year later, she said, “Honey, I’ve had a dream life, and it was all luck.”

There every Sunday afternoon for the last two decades (when Roberta was not on the road), they would chat over coffee with cream and sugar, served on formal silver.

“We just yak,” said Van Susteren, who has been regaled with stories of Roberta’s world travel and rubbing shoulders with fascinating people — including famed aviator Amelia Earhart.

*With reporting by SANDRA SOBIERAJ WESTFALL