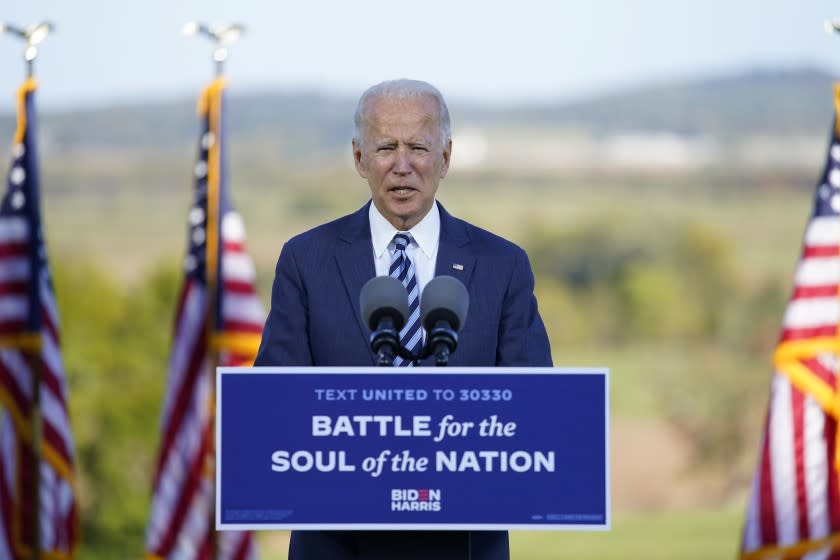 Nicole Peyton sat out the 2016 election because she didn’t like President Trump’s behavior and believed Hillary Clinton was “tarnished.” But this year, the “conservative-leaning” homemaker plans to cast a ballot for Democrat Joe Biden.

“He would be a better option. Anybody’s better” than Trump, said Peyton, 31, who dropped out of college to have her first child. Trump is a bad example for her five kids, she said as she picked up pizza for her family’s dinner on a recent Friday.

Whether women like Peyton decide to back Biden could determine who wins critical battleground states such as Michigan — which Trump won by 10,704 votes, or 0.23% — as well as Wisconsin and Pennsylvania. The demographic denoted by pollsters as white women without a college degree overwhelmingly supported Trump in 2016, but his standing with them has fallen.

Trump beat Clinton by 27 percentage points among those voters, a gap driven by enthusiasm for Trump and by voters like Peyton who stayed home because they couldn’t bring themselves to vote for Clinton.

Working-class white women still support Trump, but by a far smaller margin, recent polls show, with some giving the president an edge in the teens or single digits, including in battleground states. Other polls show Biden winning this demographic group in certain states.

“You can’t have a working-class revolt like you did in ’16 unless women are clearly part of it,” said Democratic pollster Stanley Greenberg.

That revolt was fueled by voters in places like Paw Paw, a hamlet of 3,500 people whose skyline is dominated by the historic Van Buren County courthouse, a classical revival structure built of yellow sandstone bricks and capped with a red tile roof and an Italian Renaissance clock tower.

In Van Buren County, which is 92% white and where 4 out of 5 residents don’t hold a college degree, voters chose President Obama twice before flipping in 2016 to Trump.

Kristal Petty, 30, is sticking with Trump, even though she said her family and community have suffered deeply in recent months.

“It’s been really, really rough. A lot of food pantries, a lot of making payment arrangements for bills,” Petty said, as she stopped by a Dollar Tree discount store.

But she blames the state’s Democratic governor, not Trump.

“The president is tremendous. He does a lot,” said Petty, who is a caretaker for her father. “He’s 100% for Social Security and helping lower drug costs for the elderly, and that means a lot considering both my parents are diabetics and my dad has had a stroke.”

She said she hoped Americans would come together to sympathize for the president after his coronavirus diagnosis.

“COVID doesn’t discriminate. I wish President Trump a speedy recovery,” Petty said. “Hopefully now everyone realizes he is human. He did not cause this.”

Petty said she appreciates what she considers the president’s candor, though she sometimes wished he tweeted less. “In some cases I wish he wasn’t as outspoken,” she said. “But it is refreshing to have a president that doesn’t try to sugarcoat everything.”

Echoing the Trump campaign’s message about his Democratic rival, Petty said she has no faith that Biden is capable of leading the nation.

“He’s a laughingstock,” she said. “I mean, I’ve watched interviews with him and he fumbles over his own words, he says one thing in one interview and something completely different in another.”

“We’re not seeing that replicated this cycle,” he said, adding that the president’s declining support among these women is driven by two factors — Trump’s boorish behavior since taking office, and that for the most part these voters don’t dislike Biden the way they did Clinton.

“Democrats are benefiting from having a nominee who doesn’t have as high unfavorable ratings with working-class voters. And then the second issue is that over the last four years, Trump’s tweets have really turned off a disproportionately high number of women voters,” said Conant, who was polling the battleground states until the pandemic. “Women are more likely to say they’re not going to support the president because they don’t like his character.”

This is precisely the concern for Jackie, a 67-year-old retired forklift driver who declined to give her last name. She voted for Trump in 2016 but is torn about whether she will support him or Biden in November.

“I do not like President Trump for the fact of the way he talks and downgrades everybody. But I like how the economy was doing well before all of this happened,” the Portage resident said as she ate an ice cream cone in downtown Holland, on the shore of Lake Michigan. “And so, I don’t have any idea what I’m going to do when I get in that voting booth. I keep going back and forth, back and forth.”

Trump’s behavior is among the sticking points for Peyton. She watched Trump downplay the risks from the coronavirus while friends of hers contracted it and struggled with symptoms for months. And she saw the economy in this small southwestern Michigan village grind to a halt.

When she first heard Trump was diagnosed with COVID-19, she questioned whether he was really sick. Once he was hospitalized, Peyton said she hoped the president learned from the experience.

“It’s about time he understands how serious this virus is,” she said. “I really hope he recovers so that he can make right all of the wrong things he has said and done while handling this pandemic.”

Everything that has happened in the last week, she said, reinforced her decision to vote for Biden.

Celinda Lake, a Democratic pollster advising the Biden campaign, said many working-class women’s concerns have grown exponentially during the pandemic.

They have been disproportionately hit by the pandemic, with many helping their children attend virtual school while trying to work from home — if their jobs even allow them to work remotely, Lake said. They have fewer resources than educated working women to outsource these duties.

But working-class women’s views are deeply shaped by their personal experiences trying to keep their families afloat at a time when Wall Street has recovered but Main Street hasn’t, Lake said.

“They get the bills, they determine the healthcare plan for the family, they know what Mom’s nursing home costs,” Lake said. “The chaos that Donald Trump introduces is sitting at these women’s kitchen tables right now.”

It’s a message that Sarah Longwell, a Republican strategist who supports Biden, hears constantly from women in the focus groups she’s held for two years in battleground states.

Longwell said many of these women credit Trump for his pre-pandemic work on the economy and appreciate some of his policy positions such as his moves on immigration.

“The problem for Trump is that as coronavirus has gone on and as it has hit redder states, we have not been able to get it under control, and other countries have. People have become increasingly frustrated that this isn’t over, and it makes people more willing to look for a change,” Longwell said.

A message she repeatedly hears, she said, is, “’This person is not doing a good job right now. Things are bad, objectively.’ Trump can talk about the stock market all he wants. These people feel hardship in their lives, and the stock market doing well doesn’t help them.”

Peggy Stermer, 42, said that if the president had taken the coronavirus more seriously, the pandemic might not be as bad. The political independent, who voted for Obama but sat out 2016, lost her job at a plant that made cereal boxes and is now a caregiver for her parents.

“He could have not downplayed it, and not made public statements about not wearing a mask,” Stermer said. “I think that would have helped encourage more people to get on board or slowed the spread.”

Stermer didn’t vote in 2016 because she was too busy, she said, but plans on casting a ballot for Biden in November.

“I think he’ll do a decent job. I don’t know if he’ll do a great job. But he has experience being the vice president for eight years, so I think he knows how it works in Washington,” she said. “But mainly, I just don’t want Trump for another four years.”