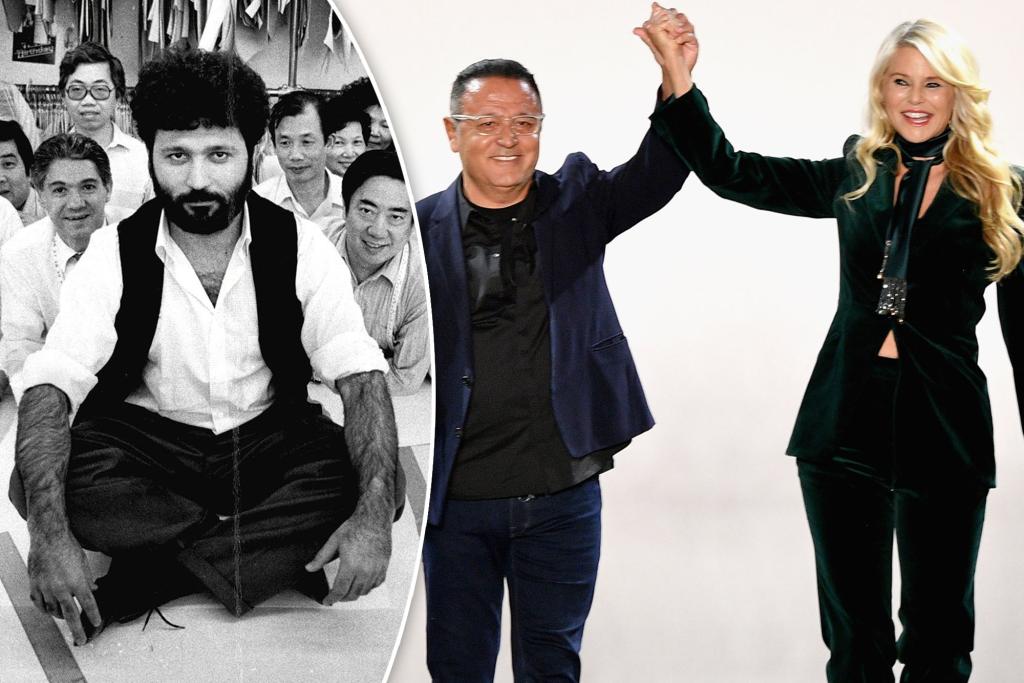 Elie Tahari now lords over a fashion empire, but his first job in New York City was washing cars for 50 cents an hour.

He happily accepted the gig. In the early ’70s, the Israeli had flown to the Big Apple with less than $100 in his pocket. He first slept at the YMCA for $2 a night. When he ran out of money, he slept on a bench in Central Park.

“I didn’t feel it was dangerous — nobody attacks a little homeless kid,” Tahari says in “The United States of Elie Tahari,” premiering at the Brklyn Film Festival this weekend.

The new doc traces his journey from poverty-stricken kid to self-made fashion mogul who built a business off a humble tube top. The film features interviews with New York style stalwarts such as Fern Mallis and Melissa Rivers as well as designers Nicole Miller and Dennis Basso.

“No one gave him anything. He did this on his own,” Basso says of his friend.

Tahari, who has dressed Hillary Clinton and Joan Rivers, had a fraught childhood in Israel, where his parents settled after fleeing Iran. He was born in a refugee camp and lived in a metal-sheet house with no electricity, running water or indoor bathroom.

“The other kids used to make jokes out of me because my clothes were dirty and wrinkled,” Tahari, 70, says in the movie.

But clothing was in his blood. His father was a fabric salesman, and his mother sewed his outfits. As a teen, Tahari entered the Israeli Air Force, where he became a mechanic.

When he returned home in his uniform, his father told him, “We don’t have room for you — we are too many,” Tahari recalls. He went to his one-bedroom apartment and “cried for two days.”

His brother worked for El Al Air and flew free, so Tahari fudged the first initial on a ticket — from his brother’s first initial of “A” to an “E” — and set off for the Big Apple.

After scrubbing cars, he landed a gig in the Garment District changing light bulbs in fashion houses. Tahari, looking down from the ladder at the action swirling below noted: “I’m in the wrong job.”

He started working at a boutique owned by an Israeli man who also manufactured clothing. One day, Tahari had an apparel epiphany: an elastic, one-size-fits-all, strapless top that a woman could wear outside at the pool or beach.

“With the tube top, it was a natural thing,” Tahari says of his now ubiquitous invention. “Women in the ’70s, when the hippie movement started, they let it all hang out. They didn’t want to wear bra.”

He brought about a dozen tube tops to his boss. “I put [them] on the counter and a couple of customers came and started fighting over them.” Soon, the budding designer had his own business. “It just took off.”

A self-proclaimed “night owl” and avid roller skater, he held his first fashion show at Studio 54. Naturally, it featured flowy disco-inspired clothes. In the 1980s, as women entered the work force in droves, Tahari pivoted to the power suit, pioneering tailored, feminine versions of the men’s office staple. In 1989, he opened a shop in Bloomingdale’s on the designer floor; more followed.

In the movie, Miller notes that Tahari is a “master tailor.”

“His jackets were exquisite,” she says, recalling one she bought in the 1980s. “It was plaid with puff shoulders . . . I always got tons of compliments on it. I wore it forever.”

Later, Tahari helped launch Theory and created a lower-priced line of suits that made his clothing available to a wider audience. In 2014, he designed a capsule collection for Kohl’s.

The married father of two still shows at New York Fashion Week — in 2019, Christie Brinkley and her daughter Sailor Brinkley-Cook walked his runway — and he credits the United States for allowing him to fulfill his dreams.

For all of his accomplishments in the fashion realm, Tahari remains most proud of bringing his family to America from Israel.

“I only thought about my family and how I could support them and help them. In the end, I brought everybody here,” he says. “So that was my biggest trophy. My biggest success.”