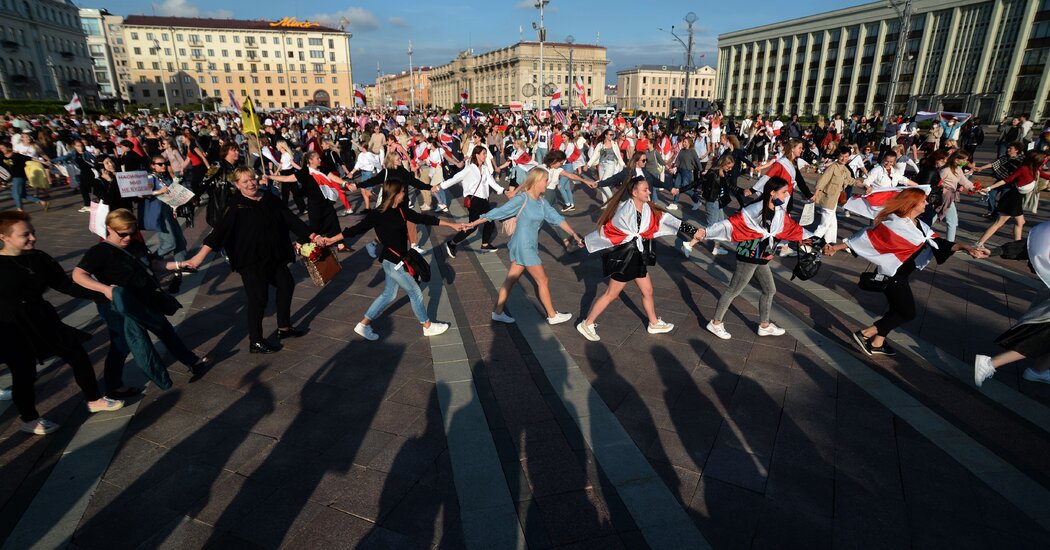 MINSK, Belarus — With masked riot police officers massing nearby, threatening to attack protesters like him with batons and fists, Aleksei D. Zulevsky felt safe for the first time in weeks of anti-government unrest in Belarus: He was surrounded by hundreds of women he knew would shield him.

“I feel protected here,” said Mr. Zulevsky, as fellow protesters, many holding red and white flags, the banner of the opposition, chanted at a rally last month. “Only cowards beat women!”

In a country whose strongman president, Aleksandr. G Lukashenko, has openly scoffed at women as too weak for politics and told them their place was in the kitchen, Belarusian women have become the face and driving force of a movement aimed at toppling a leader known as “Europe’s last dictator.”

That effort may be flagging, with Mr. Lukashenko refusing to give up power even though tens of thousands of people continue to come out to the streets of Minsk to protest every weekend. On Saturday many women, holding flowers in their hands, again protested in the city. They avoided forming a single crowd in fear of being arrested by police officers.

But whether or not the protest movement succeeds in ousting Mr. Lukashenko, it has already shattered deeply entrenched gender stereotypes built up over generations.

“Women were stronger in this situation,” said Tatiana N. Kotes, a film production designer and activist. “We had to assume a more significant role. Men’s dominating role in the society has collapsed.”

The collapse began even before an Aug. 9 presidential election that Mr. Lukashenko claimed to have won by a landslide, setting off two months of almost nonstop protests. To his obvious distaste, Mr. Lukashenko faced an unexpectedly strong challenge from a woman candidate, Svetlana Tikhanovskaya, the wife of a popular blogger who had hoped to run himself but was imprisoned before he could register as a candidate.

Mr. Lukashenko mocked his rival as a housewife, a meek mother ill-equipped to debate serious issues of state with a veteran leader like himself.

“She just cooked a tasty cutlet, maybe fed the children, and the cutlet smelled nice,” Mr. Lukashenko said in an interview shortly before the election. “And now there’s supposed to be a debate about some issues.”

Adding to his rage and, perhaps, consternation, was the fact that the opposition, previously led by men and prone to bitter internal feuding, had united around three women — Ms. Tikhanovskaya, whom they backed as the candidate; Veronika Tsepkalo, the wife of a would-be candidate who fled the country to avoid arrest; and Maria Kolesnikova, the campaign manager for Viktor Babariko, a jailed banker who had also hoped to challenge Mr. Lukashenko.

With all the main male opposition figures knocked out of the race by arrest or flight abroad, Ms. Tikhanovskaya and her two colleagues ran a strategic and successful campaign, holding large rallies across the country while Mr. Lukashenko confined himself to Soviet-style visits to factories and military bases.

“At our first rallies, we were amazed to see how many people turned up,” Ms. Tsepkalo, 44, said in an interview. “It was a symbol of the unity of Belarusians against the dictatorship.”

Ms. Kolesnikova, the only one of the women to remain in Belarus after the election, achieved hero status when she tore up her passport to foil the government’s plan to deport her to Ukraine, and was then imprisoned.

The emergence of women in the protest movement — while surprising to many and, to Mr. Lukashenko, an affront to the natural order — drew on an important feature of the country’s national psychology left by the traumas of World War II, when a quarter of the population, mostly men, was wiped out.

Olga Shparaga, a feminist and lecturer in philosophy at the European College of Liberal Arts in Belarus, said the shortage of males left women to play an outsize role in rebuilding the devastated country once the war ended in 1945. Memories of this, she said, left even the most misogynistic Belarussians aware, deep down, of what women could accomplish.

Wartime memories have been kept alive and introduced to younger Belarusians with no recollection of the war or its aftermath by Svetlana Alexievich, the winner of the Nobel Prize in Literature, who has made the role of women one of the main topics of her work.

“After the war, we children lived in a world of women,” Ms. Alexievich said in her Nobel lecture in 2015. “What I remember most is that women talked about love, not death.”

But it is perhaps Mr. Lukashenko himself who, inadvertently, has done more than anyone to advance the cause of feminism. Casting himself as a classic Slavic “muzhik,” or real man, Mr. Lukashenko has sneered at women with such abandon that he has become a caricature of boorish misogyny and an easy target for attack.

Sergei Chaly, a Belarusian political and economic analyst who worked with Mr. Lukashenko at the beginning of his political career in the 1990s, said Ms. Tikhanovskaya made a smart decision to portray herself as “a simple woman that just needs her husband and children, but who was selected by fate to fulfill a political role.”

That appealed to voters wary of the dominating and masculine style presented by Mr. Lukashenko throughout his 26 years in power.

“He got used to dealing with men by means of bullying and boorishness, but this didn’t work with women,” Mr. Chaly said.

After their leading role in the campaign it was only natural that women would step up in the protests that broke out after Mr. Lukashenko claimed an implausible 80 percent of the vote in the Aug. 9 election. In the days that followed, the streets of the capital, Minsk, became a perilous conflict zone. Thousands of protesters, mostly men, were arrested, and hundreds were beaten and tortured.

With the country in danger of sliding into violent strife as groups of aggressive young men appeared on the streets calling for revenge, women again took center stage. A small group of women activists organized a protest so conspicuously peaceable that, they calculated, even the most brutish riot police officer would hesitate to use force.

Hundreds of women descended hand-in-hand on the central market in Minsk, forming a human chain that left the police clearly baffled about how they should respond.

Beating unarmed women publicly risked embarrassing the law enforcement apparatus and opening up officers not only to public condemnation but perhaps even punishment by their superiors.

“Our government is always looking for organizers, but this idea was in the air, it was a feeling shared by all women in Belarus,” said Irina G. Sukhiy, an activist who joined the women’s protest.

The day after the first women’s march ended peacefully, thousands of women took to the streets in Minsk and other cities across the country. Mr. Lukashenko, who was counting that brute force would be enough to crush the protests, was thrown off balance and sought help from President Vladimir V. Putin of Russia.

The immediate answer was to isolate the women leading the protests and drive them out of the country. More recently, masked police officers, many of them visibly embarrassed, have made mass arrests of women demonstrators. But most of those taken into custody were released after fingerprinting and a mug shot. Even the leaders, like Ms. Sukhiy, were sentenced to only several days of administrative arrest.

“They didn’t expect that a woman could stand against them,” said Ksenia A. Fyodorova, 47, an entrepreneur and activist, of the security forces. “We realized that you can only counter them in a way that would be diametrically opposed to what they did.”

Speaking with reporters in Berlin Wednesday after meeting with the German chancellor, Angela Merkel, Ms. Tikhanovskaya said the role women have played in the uprising was as determined as it was unexpected.

In the face of official brutality, she said, the women have responded by showing “peace and love.” As a broad smile broke across her face, she added, “Now, Belarusian women are world-known, and this is wonderful.”