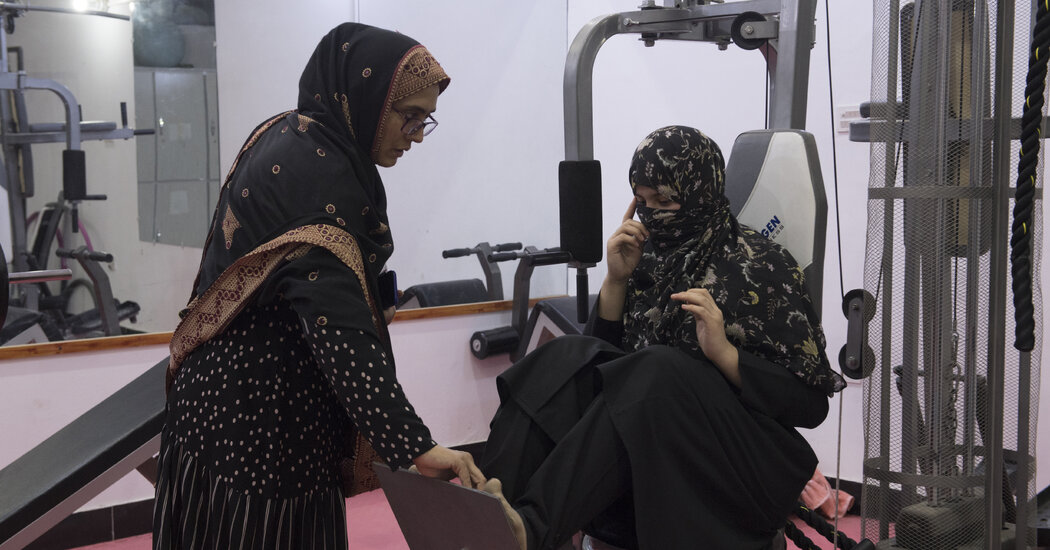 KANDAHAR, Afghanistan — Homa Yusafzai felt terrible. Her weight was up, she had diabetes and high blood pressure, and at just 27 she felt lethargic and depressed.

Then she heard that Kandahar’s first health club for women had just opened — the miracle she had been waiting for, she thought. Her husband at first refused to let her join. Kandahar is a deeply conservative city, a former headquarters of the Taliban where men still dictate the most prosaic details of women’s lives.

But ultimately, he relented, and Ms. Yusafzai now works out six days a week, straining through hand-weight repetitions and pounding a treadmill. In six months, she said, she had shed almost 50 pounds, lowered her blood pressure and brought her diabetes under control.

“I feel so healthy and I have more energy — I’m so happy,” she said as she rested between workouts.

The health club was opened late last year by Maryam Durani, 36, an indomitable women’s rights advocate who has survived two suicide bombings, an assassination attempt and countless death threats — not to mention harsh public condemnation for opening the club.

The gym has survived, tucked away in a windowless basement inside a locked compound, shielded from prying eyes. It is the latest addition to the Khadija Kubra Women’s Association, run by Ms. Durani with her father’s help since 2004. It includes a radio station, English and literacy classes for women, an Islamic school and a seamstress center that sells clothing made by women.

It is rare for Afghan women to exercise, though several women’s health clubs and even two women’s swimming pools have opened in Kabul, the capital. But in conservative strongholds like Kandahar, many men disapprove of women trying to take control of their own bodies.

“Kandahar is a very difficult environment for women,” Ms. Durani said. “We have to be careful and discreet.”

She added: “The club is as much for women’s mental health as their physical health. Almost every woman who comes here is depressed.”

Roughly 40 percent of club members exercise secretly, hiding workouts from their families, Ms. Durani said. Membership had dropped from 60 in the spring to 30 now, because of a three-month coronavirus closure and because some women feared their families would discover their secret workouts.

“My father and brothers said they would kill me if I went to a health club,” said one gym member, who asked to be identified only by her nickname, Tamana.

Tamana, 33, was dressed in white robes traditionally worn for studying the Quran at a madrasa — the excuse she gives her family for leaving home to exercise at the club two hours a day, six days a week. She changes into workout clothes at the gym, hitting the treadmill, stationary bike and hand weights.

“I’m not doing anything wrong or shameful,” Tamana said. “In fact, it’s something that’s made me a happier and healthier person.”

But the gym is constantly in jeopardy. Soon after it opened, it was deluged with profane social media posts from outraged residents. They called it a house of prostitution where whores exercised to make themselves more appealing to men. Mocked and vilified, Ms. Durani was told to close the club and send the women home to their husbands.

“I was shocked that they called my daughter a prostitute — that they said no man with dignity would allow such a thing,” said Ms. Durani’s father, Haji Mohammad Essa, 82, a wiry, white-bearded former teacher who owns the compound that includes the gym.

Club members say they have been harassed and propositioned by men outside the club. A few have been struck by stones thrown by men on motorbikes who threatened to kill them if they continued to visit the club, Ms. Durani said.

Some members always cover their hair with head scarves while exercising — out of modesty or tradition, Ms. Durani said. (A male reporter was permitted to interview women inside the gym, but not during workouts and only while they were fully covered. A female photographer for The New York Times was allowed to photograph gym clients with their consent.)

“If people see us exercising without being covered, it will create a bad image for us,” Ms. Yusafzai said.

The club employs a trainer who leads exercises and teaches nutrition and dieting. Ms. Yusafzai said she abandoned meat, rice and bread in favor of vegetables and fruit. She no longer ate sugar or chocolate, and had meat and rice just once a week, she said.

Mumtaz Faizi, 32, said her husband had encouraged her to join the gym. “He told me I was too fat and looked like a big ball,” she said.

She was so overweight that her feet hurt. “Actually, my whole body hurt, I was so obese,” she said.

After two months on the treadmill and stationary bike, plus situps and hand weight workouts, she had lost 11 pounds and was determined to lose 30 more, she said.

Ms. Faizi said she felt relaxed and free inside the sanctuary of the gym. Even so, she said she did not feel completely free of stress and worry.

“In this society, men create all the problems,” she said. “It’s our culture, not just the Taliban. They’ve been gone a long time, but men still control everything.”

Several neighborhood men said they approved of the club as long as the women were shielded from public view. They said Kandahar had no safe spaces for women to exercise.

“Women need more exercise than men because they stay home and get fat, which causes diseases,” said Abdul Wali Wafa, 30.

Sardar Mohammad, 40, said most older men vehemently disapprove of the club, but younger men have few objections. “If the environment is safe and protects women, it’s OK,” he said.

Mr. Essa, who runs the radio station, said he views the gym as one small step in returning Afghanistan to what he considers its glory years — the 1960s and early 1970s, when he remembers a progressive government and freedoms for women.

“We’re an extremist country now,” he said. “I would sacrifice my life if Afghanistan could go back to that time.”

For now, he said, it gives him great pleasure to see women exercising and improving their health, and for just 250 Afhanis ($3.50) a month. He also enjoys teasing his daughter, who said she had lost weight after regular gym workouts.

“You used to tell me I was too fat,” Ms. Durani told him. “Now you tell me I should eat more or I’ll get sick.”

For Ms. Yusafzai, the club provides a welcome refuge. “I relax when I’m here and forget about everything outside, at least for a while,” she said.