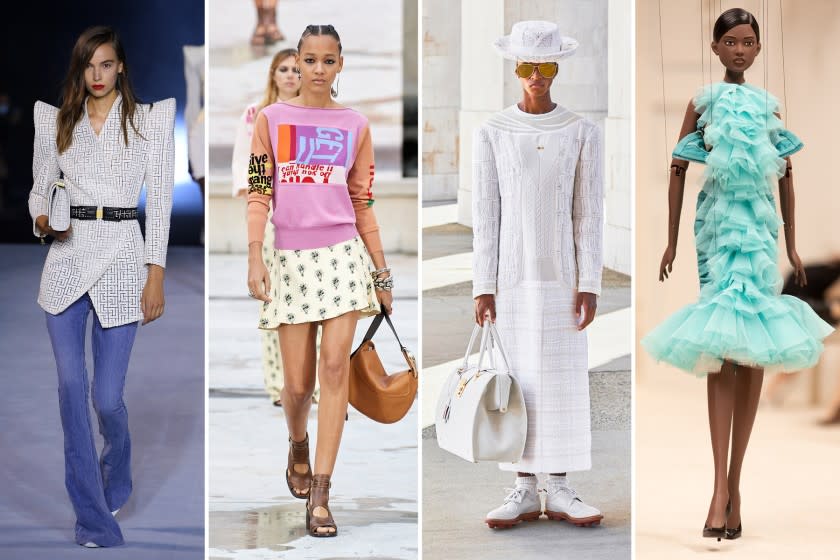 Finding hope in the thick of it seemed to be one of the overarching themes of the most memorable spring and summer 2021 collections presented at the mostly virtual Milan and Paris fashion weeks that officially ended Tuesday, and those spirit-buoying collections, whether they ultimately resonate at the cash register six months from now (or not), were a welcome bit of magic-making coming from a luxury fashion world all too often out of touch with the world beyond the runway’s end.

At the same time as designers seemed to be looking ahead to a cheerier post-pandemic world, they were also acknowledging the realities of how people are actually dressing these days by offering comfortable-looking clothes that wrapped, draped and enveloped the body and, in a few instances, explicitly referencing the wardrobe dichotomy spawned by work-from-home videoconferencing. As you know, that would be dressy from the waist up and casual down below.

The Balmain spring and summer 2021 men’s and women’s collection presented live — as well as live-streamed — keyed into both themes.

In his post-show notes, creative director Olivier Rousteing specifically cited this sense of optimism as an inspiration, comparing the current state of the world to the one faced by the label’s namesake, Pierre Balmain, when he decided to found his own fashion house 75 years ago in the aftermath of World War II.

On the runway, that optimism took the form of strong, elongated silhouettes with pagoda-shouldered double-breasted jackets and high-waisted trousers that flared generously from the knee as well as a color palette that alternated between shades of gray and fluorescent hues including highlighter yellow, flamingo pink and chartreuse. There was even a glimmer of optimism in the allover “PB” pattern-covered pieces that opened the show. An updated version of a pattern inspired by Monsieur Balmain’s fascination with the labyrinths of French Renaissance gardens, it felt like a subtle reference to the confusing maze we’re collectively trying to navigate.

Some of the sharp-shouldered looks were paired with curve-hugging jeans, denim cutoffs or see-through skirts, which, along with comfy-looking knitwear and dresses and tops that draped loosely around the female form, were Rousteing’s nod to pandemic dressing. (“After spending so many months working from home, seated at our kitchen tables during conference calls, it’s not so all that surprising to see a silhouette that includes a tailored [double-breasted] jacket paired with biker’s shorts, is it?” he asked in the show notes.)

Further telegraphing the future’s-so-bright vibe of the collection were the sunglasses that accessorized some of the looks, the latest Balmain Eyewear by Akoni styles outfitted with polarized lenses.

Eye-catching eyewear was also in the mix for Thom Browne’s forward-looking men’s and women’s spring and summer 2021 collection, presented via a short film shot at the Los Angeles Coliseum. Here the reflective yellow-lensed sunnies were solar-glare protection for athletes competing in the first Olympic Games to be held on the surface of the moon — in 2132. In an interview in advance of the short film’s debut, the earthbound designer (whose space-themed Paris menswear debut in 2010 still ranks among our all-time favorites) explained why the time was right for an Olympics-on-the-moon-inspired collection.

“In a way, there’s something very hopeful about [space travel],” Browne said. “And I wanted the overriding message of the collection — especially with what we’re living through right now — to be one of hope. Putting the Olympics on the moon is definitely something to hope for someday.”

The Olympic motif came from a similar place. “I love the idea of the Olympics and the world coming together every four years,” Browne said. “And the L.A. Coliseum is such an iconic Olympic venue. There were so many really hopeful messages that we were able to portray in this film.” (The Coliseum hosted the opening and closing ceremonies for the 1932 and 1984 Games, and is set to do so a record third time in 2028.)

Despite the futuristic conceit of the short film, Browne said the inspirational starting point for the collection itself was actually the 1924 Olympics and the style of French tennis player Suzanne Lenglen. The result was an almost all-white collection that continued the exploration of gender-blurring clothes that began with fall/winter 2020’s Noah’s ark-themed collection (which, not coincidentally, marked the first time Browne had presented his men’s and women’s collections together). Silhouettes were elongated, and proportions exaggerated.

For men, that meant long, oversized blazers and coats, pleated skirts, shorts and cropped trousers. And for women, there were similarly oversized sack suits, structured blazers and pencil skirts that pull off the body (a trick of the lower lunar gravity perhaps).

What the collection lacked in color, it more than made up for in fabrication and texture: seersucker served up in wool, ribbons of oxford cloth woven through tweeds, and garments puzzle-pieced together from satin and grosgrain ribbons.

Few designers embraced the notion of optimism as directly — and enthusiastically — as Chloé designer Natacha Ramsay-Levi did in her aptly named Season of Hope spring and summer 2021 women’s collection, which sprinkled the colorful graphics and upbeat messaging of artist Corita Kent throughout a collection that felt both easy-wearing and exquisitely feminine.

Tunic tops, flowing tulle spaghetti-strap dresses and roomy-legged, high-waisted trousers were served up in a color palette that included earth tones, neutrals and what Ramsay-Levi described in the show notes as “washed neons” (pale lavender, faded coral and butter yellow) with florals scattered throughout either as allover prints or appliqued Art Nouveau blooms that climbed across the front of dresses and tops. Frilly, flouncy details like lace trim, crocheted inserts and ruffled shoulders were offset in many looks by strappy top-stitched trench belts.

The Kent artwork in the mix included “hope,” which appeared on the left hip of a white sleeveless dress in one look and on the belt buckle accessorizing another, “give the gang our best,” screenprinted on a T-shirt, “for emergency use soft shoulder” on another tee and “viva” on a white button-front shirt.

The graphics for “hope” and “give the gang our best” popped up again — on the left and right sleeves respectively — of a sweater that put a fifth Kent piece, “i can handle it,” front and center in an intarsia knit. As if the bold, bright graphic messages weren’t feel-good enough, the post-show notes point out that the nonprofit Los Angeles-based Corita Art Center, which signed off on the use of the artwork, will receive part of the proceeds from the collaboration.

At first glance, creative director Jeremy Scott’s latest collection for Moschino, presented by way of a short film during Milan Fashion Week, didn’t seem to play on the notion of hope or optimism specifically. But, as I watched it stream across my computer screen, I felt a tiny flicker of hope that, while the COVID-19 pandemic might have forever upended the traditional fashion-week format, the possibilities of what might take its place are truly endless — and just as magical.

That tiny flicker of hopeful magic came by way of Hollywood-based Jim Henson’s Creature Shop, which created a salon-style fashion show in miniature, with marionette models wearing meticulously scaled-down versions of the actual spring 2021 collection as they strutted on strings in front of an audience that included marionette versions of some instantly recognizable front-row fashion-show fixtures. (The mini Anna Wintour with her tiny bob and tiny sunglasses is everything.)

That we could see the make-believe — the doll-like models and the strings from which they dangled — keyed into the inside-out, topsy-turvy, behind-the-scenes-takes-center-stage theme of the collection itself. Garment underpinnings — corsetry boning, seams and darts — became external flourishes. The sides of a gold jacquard halter dress peeled back to put a tulle underskirt front and center; chunky zippers ran down the front of dresses, and pocket bags fluttered at the hips of inside-out blue jeans.

In embracing a similar approach to show his spring 2021 Moschino collection in the middle of a pandemic, the economic impact of which is yet to be fully calculated, he sent perhaps the most optimistic message of all: Hope comes in all shapes and sizes.