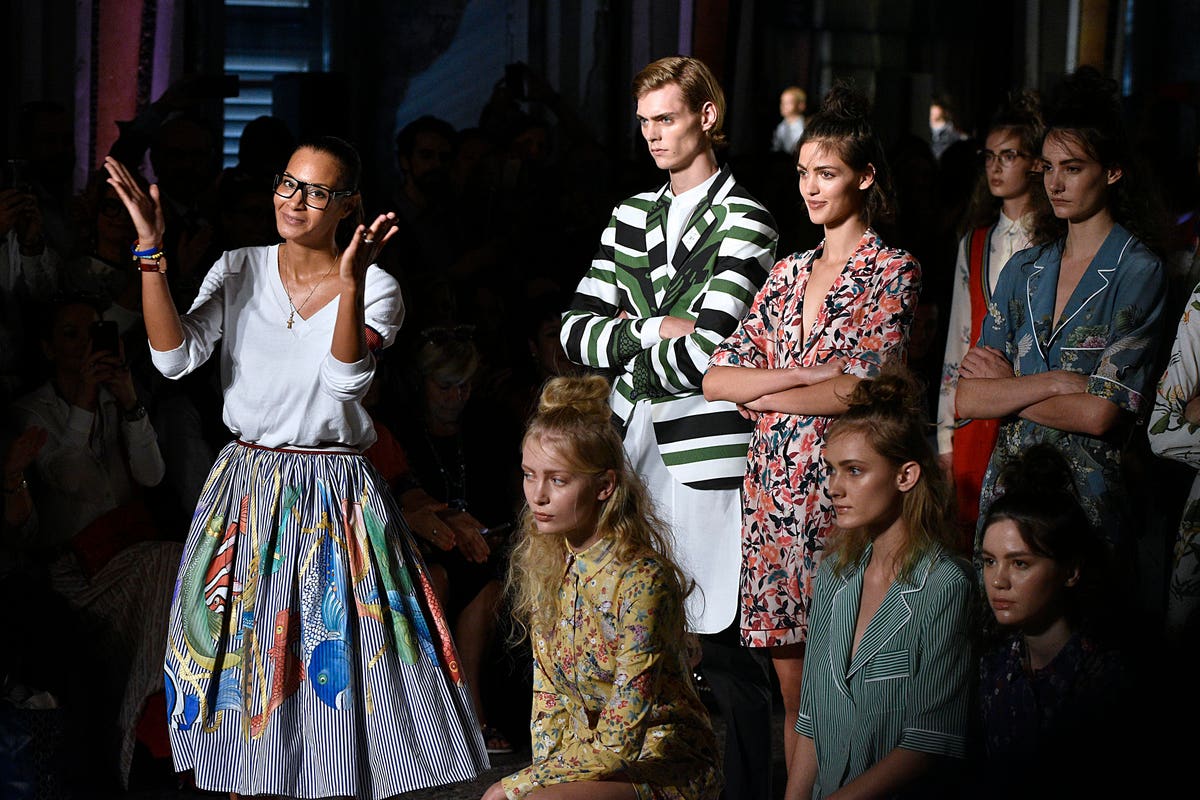 The little-known black designers participated in the We Are Made in Italy digital show organized by the Black Lives Matter In Italian Fashion Collective. Afro Fashion Week founder Michelle Ngonmo and designers Stella Jean and Edward Buchanan, who are behind the Collective, have been fighting for greater inclusivity in the Italian fashion industry. Jean said their aim is to “counter the misconception that to be Italian and a representative of Made in Italy is to be white. By presenting the names and faces of these new Italians, we are making a strong statement.”

The five featured artists are passionate about the importance of their inclusion in the Made in Italy brand. Fabiola Manirakiza is the name behind the fashion brand Frida Kiza. Her work pays homage both to her homeland Burundi and to the region of Le Marche, her home in Italy. At Milan Fashion Week, she displayed her current collection of lockdown loungewear saying, “Today is also the opportunity to make the world understand that ‘made in Italy, created by Africans’ exists. It’s very emotional. We all feel Italian.”

Black designers have rarely found themselves included in the Italian fashion industry. Claudia Gisèle Ntsama, designer and founder of GISFAB, had to earn money working as a cleaner while creating her collection. Inspired by the abstract, conceptual work of Japanese designers Junya Watanabe and Yohji Yamamoto, Ntsama showcased ethereal dresses of roughly ruched threads at the Milan show.

In a video on the website of Camera della Moda, who sponsored the We Are Made in Italy show, the five artists’ work is showcased accompanied by impassioned statements from the designers about their place in the industry. They talk about the need for the Italian fashion industry to accept the influence and inclusion of other cultures. “The meeting of cultures is an irreversible choice,” says Ntsama, while Karim Daoudi echoes, “Exchanging viewpoints with others is already part of us.” Born in Morocco, Daoudi moved to San Mauro Pascoli where he studied at the Cercal shoe academy. His structured, florescent shoes that made an appearance at the We are Made in Italy show draw inspiration from Italian footwear designers Giuseppe Zanotti and Gianvito Rossi.

Joy Ijeoma Meribe, founder of Modaf Designs follows on in the video by saying, “The other is now already part of us”. Her sustainable printed silk shirts take inspiration from her Nigerian heritage.

Senegalese artist Macodou Fall, founder of Mokodu, affirms in the video “Clothes can speak louder and in a more incisive manner than manner words.” Like the other four designers, Fall wants his work to demonstrate Made in Italy must be a label without prejudice. For the Milan Fashion Week show, Fall showcased his sharply tailored suits painted with bold flowers and horses.

The We Are Made in Italy show comes in the wake of the Black Lives Matter movement in Italy. Jean, Buchanan and Ngonmo were stimulated to create their Black Lives Matter in Italian Fashion Collective after brands rushed to include models of color in their catwalks, but the industry still failed to be more inclusive to black designers. As such, the Collective wants to focus on black creatives whose work is frequently still not accepted as “Made in Italy”.

Speaking at an Afro Fashion week event, designer Meribe said, “Most people basically think that you are an ethnic designer and most of the time they ask me ‘where is it made?’ They don’t believe it’s made in Italy because the first thought that comes to them is ‘where is it imported from?’ I have a constant struggle of trying to explain to people that I live in Italy, I work in Italy and everything is produced in Italy.”