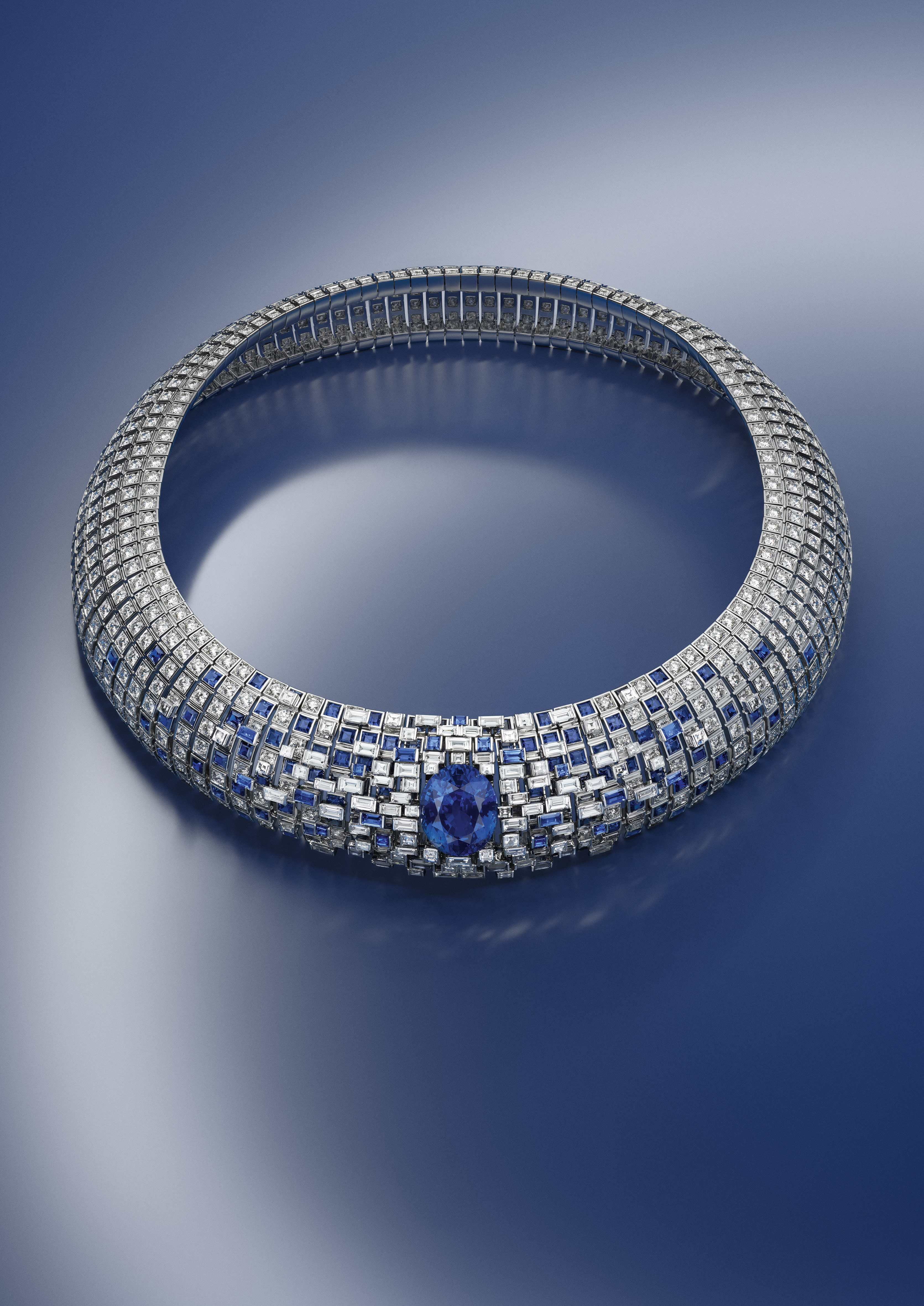 PARIS — With seasonal calendars turned upside-down by the coronavirus pandemic, a number of jewelry houses took advantage of recent activity in Paris to show off their latest pieces, including Louis Vuitton, Hermès, Chaumet, Dior, Chopard and Messika.

Francesca Amfitheatrof jetted into the French capital to present her second high-jewelry collection, “Stellar Times,” for Vuitton, taking to the private salon of the house’s Place Vendôme flagship to present the pieces, then hosting a dinner at the Ritz with celebrities including Alicia Vikander and Catherine Deneuve, as well as clients and members of the press.

For the previous collection — her first at the label — the designer had sought to lay the groundwork for an assertive proposition.

“I felt it needed to be a very clear, historical medieval women, to put the stake in the ground — it was a new moment,” she recalled.

“Here I wanted to reinforce the codes that I’m creating for the maison, which is graphic and bold  jewelry,” she added, noting it was important that pieces can also be worn in the daytime.

She said it was an emotional trip to see the jewelry.

“I got off the plane and I cried. You work for two years on this and not seeing it, not touching it, holding it, seeing how it moves,” Amfitheatrof said, noting her training as a bench jeweler and enjoying feeling the weight and detail of the pieces.

“And I want everything to move, I really like jewelry that moves with the body, that’s more sensual,” she added.

The designer turned to the Lune Bleue choker, which evokes the moon on the ocean, with a gridlike assemblage of diamonds and sapphires — with a 15.56-carat sapphire from Madagascar as the centerpiece. “I love reflection of the moon on the water, so it’s a bit more romantic, spiritual,” she said.

“To me this is the holy grail — who else would do it?” she said, noting the research and development commitment it entails.

“I really wanted to paint with colored stones,” she continued, pointing to the purity of color of an over 8-carat ruby on the Astre rouge choker, which sits below a star-cut diamond of 4.46 carats.

In keeping with the assertive style that Amfitheatrof has been building for the house, a series of prominent cocktail rings featured chunky tourmalines set against a stark background of platinum and white diamonds.

“It’s hard to launch a collection during COVID-19 when no one’s going to stores, but I think with fine jewelry it’s decades, it’s not like a fashion line that you’ve got to hit the spot in the first three months and then you’re on to the next — this is like, you build and build,” she said.

Stone sourcing has been a priority for the designer, as well as Louis Vuitton chief executive officer Michael Burke, and she described sourcing teams as hunters. “Every stone has such an incredible story of how it got to us so there’s a real sense of adventure to it,” she enthused.

“I went from the solid and constructed pieces, to the most immaterial and lightweight ones — nearly invisible,” explained Hardy. He played with the space occupied by jewelry, pushing it in new places on the body.

It was a new tack for a designer who said his normal approach tends to be more formal, starting with drawing.

“This time it was different,” he said, explaining that he sought to explore the relationship between jewelry and the body.

“What is this relationship — which is quite mysterious, really — between the body and jewelry, skin and jewelry, this intimacy between two things that are not made to meet — metal and stones with skin,” he said.

Visitors were invited to view the jewelry in a darkened room, where two wall-sized screens showed grainy images of a woman wearing the pieces, moving slowly to show the sparkle, with shadowy projections of waves, and lightning. The jewelry was suddenly revealed against a black backdrop, drawing the small crowd to peer in closely. It was an effective presentation.

Playing with volumes, rigidity and suppleness, the Ondes Miroirs sautoir necklace was an intricate affaire, with thin rows of paved diamonds that frame the neck, as well as the shoulders, falling off the back.

“It’s one piece,” said Hardy. Indeed, it looked like several pieces strung together, airy and delicate.

He sought to make a piece that reached from “the head to the waist without weighing three tons and resembling a backpack,” he added.

Another necklace arranged strings of diamonds that looked like rivulets of water, running across the chest, while another formed a net-like pattern, resting on the body like a scarf — or silk.

“I was after nuanced tones,” said Hardy.

Chaumet displayed its Ondulation pieces, the final chapter of its graphic Chaumet Perspectives collection, shown in July, based on the house’s history of drawing on architecture. The final set stands on its own, with a yellow gold necklace made of a fabric-like mesh that melds to the skin, punctuated with a prominent 30.25-carat cushion-cut indicolite tourmaline, and accented with yellow sapphires.

The house has partnered with the Paris fine arts school Beaux-Arts, funding a professorship that will offer public conferences in addition to student seminars on drawing.

Dior brought pieces of its Tie & Dior collection that was unveiled in July in China. Victoire de Castellane, who is known for her lively combinations of stones, focused on various gradations of the same color in much of the collection, mixing and matching as well, with colored pearls — including pink, golden and pistachio ones  — adding a smooth contrast to the chunky stones.

Chanel showed jewelry that focused on house icons from Coco Chanel’s jewelry collection Bijoux de Diamant in 1932, including the lion, a comet, the sun and feathers. A feather ring covers the length of a finger while the comet is featured on a necklace that can be transformed into a brooch.

Diamond specialist Valerie Messika struck up a partnership with Kate Moss for a new collection, and dove into the supermodel’s jewelry collection for inspiration. The pair turned up a series of assertive necklaces in malachite, turquoise or mother-of-pearl and pear-cut diamonds, in a display of Messika’s push into more colorful territory with the use of precious materials. An Art Deco set featured baguette cut diamonds while the bohemian jewelry mixed different shaped cuts, including pear and emerald cuts.

Caroline Scheufele of Chopard and Marion Cotillard took to the Ritz to present their Ice Cube capsule collection, after months of postponement. The collection featured an earring with a cascade of diamonds and a series of ear cuffs that can be stacked together — no piercing needed.
The jewelry was designed with director Eliott Bliss, who is in charge of styling for the cinema star.

Amélie Huynh opened the first boutique for her jewelry label Statement in the center of Paris, where the sharp pointed silver pieces are displayed in modern glass and steel cases. With smooth concrete slabs — at an angle — and a screen featuring the label’s new digital heroin, Alyh, the futuristic feel is softened by the contemporary jewelry designs. Updates of the Myway ring introduce colored stones while the RockAway ring morphed into a flatter version, paved with diamonds.

Tatiana Verstraeten has struck a partnership with U.N. Women, with plans to give proceeds from her signature earrings to the organization.

The designer has been working on presenting her highly exclusive offer through digital means after her planned launch in China was postponed twice due to the COVID-19 crisis. She hopes to leverage her ambassadors, who are actresses and who have significant platforms, to help raise the visibility of the U.N. group.