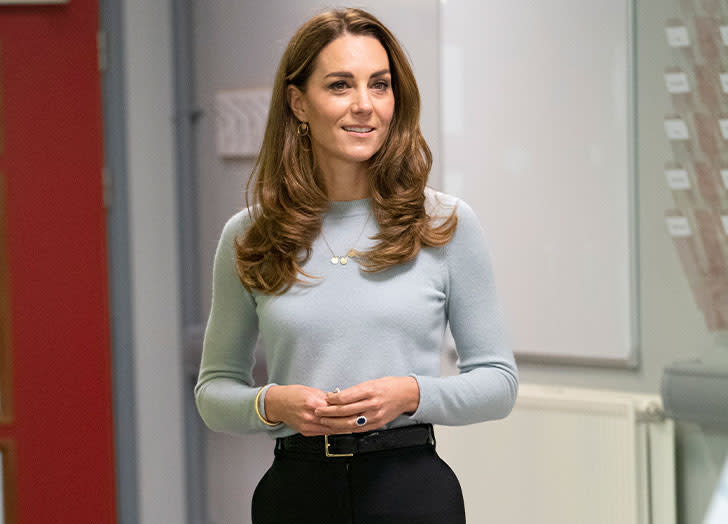 Kate Middleton had quite an eventful week. Aside from visiting the University of Derby and welcoming the president and first lady of Ukraine, the duchess also paid homage to her late mother-in-law, Princess Diana.

While speaking with Volodymyr Zelensky and his wife Olena at Buckingham Palace, Middleton wore a blue Emilia Wickstead dress and dazzled in a diamond and sapphire set, complete with her infamous drop earrings and a never-before-seen pendant necklace.

As most royal fans know, Middleton’s sapphire earrings were remodeled from Princess Diana’s original design and have already been worn on several occasions. But considering how perfectly that necklace matches the earrings and her wedding ring, it’s very likely that the necklace, which features a small, sapphire pendant surrounded by diamonds, is also a redesign from her late mother-in-law’s sapphire collection.

The original set was a wedding gift to Princess Diana by the Saudi royal family in 1981. The collection included a large Burmese sapphire and diamond necklace, a sapphire ring, a bracelet, a watch and earrings—all of which were designed to match her gorgeous engagement ring (which has been passed down to Middleton). Below, Princess Diana can be seen wearing the original sapphire necklace at an event in Melbourne, Australia.

This isn’t the first time that the duchess has paid tribute to Princess Diana’s chic style. Back in 2018, the mother of three wore a bright blue Jenny Packham dress to attend a gala honoring the Tusk charity, and it legit looked like an exact copy of Princess Diana’s navy blue number that she wore to several events before her unfortunate passing.

From trendy hats to glam pendant necklaces, it’s clear that Middleton is following in the footsteps of her elegant and fashionable mother-in-law.