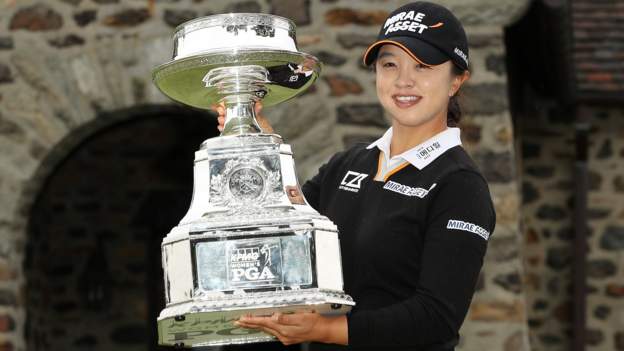 South Korea’s Kim Sei-young surged to her first major title with an assured five-stroke victory at the Women’s PGA Championship in Pennsylvania.

The 27-year-old world number seven began three ahead and her seven-under 63 – the lowest final round in the event’s history – took her to 14 under.

Britain’s Charley Hull posted a second successive round of 69 and shared seventh at one under.

Compatriot Mel Reid, last week’s Shoprite Classic winner, finished with a 70 for a share of 30th at five over, while Georgia Hall tied for 59th at 11 over after a 73 at Aronimink Golf Club.

Kim, runner-up in this event in 2015, was also second at the 2018 Evian Championship and is the 26th player to make the event her first major victory, the fourth in five seasons.

“This golf course is really challenging,” said Kim after her 11th LPGA victory. “I tried to keep the focus on my job. It was really tough.

“Sometimes I’m shaking my head and my legs were shaking but I was able to keep my focus and I was able to reach my big goal, so I’m very happy about that.”

Japan’s Nasa Hataoka holed a 188-yard five-iron to eagle the first hole and her second consecutive final-round 64 at the Women’s PGA gave her a share of third.