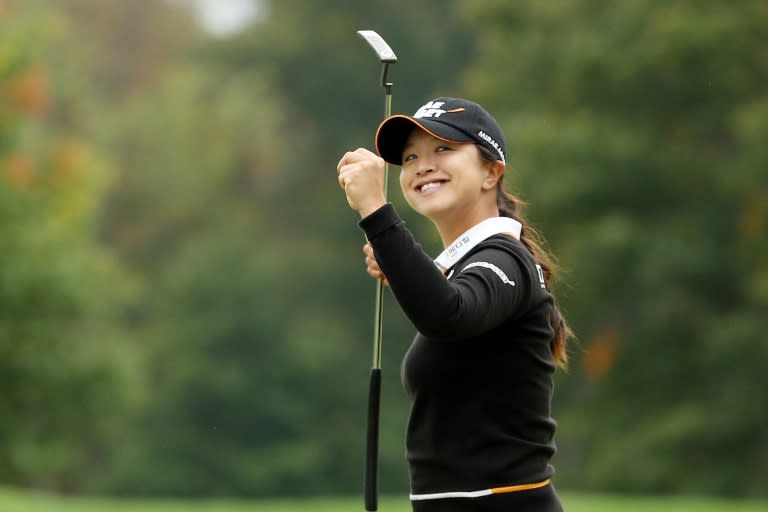 The 27-year-old from Seoul became the ninth first-time major winner from the past 10 women’s golf majors with a bogey-free finish at Aronimink in Newtown Square, Pennsylvania.

“It means a lot,” Kim said. “I feel so emotional. It’s a dream come true. I’m waiting for a while to reach my biggest goal.

Seventh-ranked Kim finished the 72 holes on a tournament-record 14-under 266 to beat compatriot Park In-bee by five strokes with Japan’s Nasa Hataoka and Spain’s Carlota Ciganda sharing third on 273 and Sweden’s Anna Nordqvist fifth on 276.

“Sei Young was just really untouchable,” Park said. “She played really, really good golf today. I’d like to congratulate her. She had a great day. That’s how a champion plays a final round, so it was good to see that.”

Kim had a chance at a 62 but missed a 15-foot birdie putt at the final hole, instead settling for the low last-round in Women’s PGA history, breaking the record 64 set last year and this year by Hataoka.

“This golf course is really challenging,” Kim said. “I tried to keep the focus on my job. It was really tough.

“Sometimes I’m shaking my head and my legs were shaking but I was able to keep my focus and I was able to reach my big goal so I’m very happy about that.”

It was the 11th LPGA triumph for Kim, her first since last November’s Tour Championship.

“Definitely a different feeling,” she said. “Winning (that) was great, it was really thrilling, but this one, feels like a dramatic accomplishment.”

Kim had been the winningest active player without a major crown.

“I didn’t know it was going to take this long,” she said. “I’m so excited. I’m actually really hiding my tears.”

Kim’s top prior major showings were runner-up efforts at the 2018 Evian Championship and 2015 Women’s PGA.

She became the 26th player to make the event her first major victory, the fourth in five seasons.

Starting the day with a two-stroke edge, Kim was among those with an early wake-up call as leaders went out in the 10th trio off the first tee in the morning rather than in the final group in a unique start format.

Kim birdied the par-4 third an sixth holes and made another at the par-5 ninth to solidify her spot atop the leaderboard.

“I stuck to my game plan,” Kim said. “Just focused one shot at a time. I didn’t want to play like this was my final round but just stick to my momentum that I’ve played all week, so that worked out.”

Back-to-back birdies at the par-4 13th and par-3 14th stretched her advantage and Kim added another pair at the par-5 16th and by curling in a 10-foot putt at the par-3 17th to put her in record territory.

Hataoka’s second consecutive final-round 64 at the Women’s PGA included an eagle from the first fairway, rolling in a 188-yard 5-iron shot. She added four birdies in a bogey-free round.

“I just fought all the way to the end,” Hataoka said.