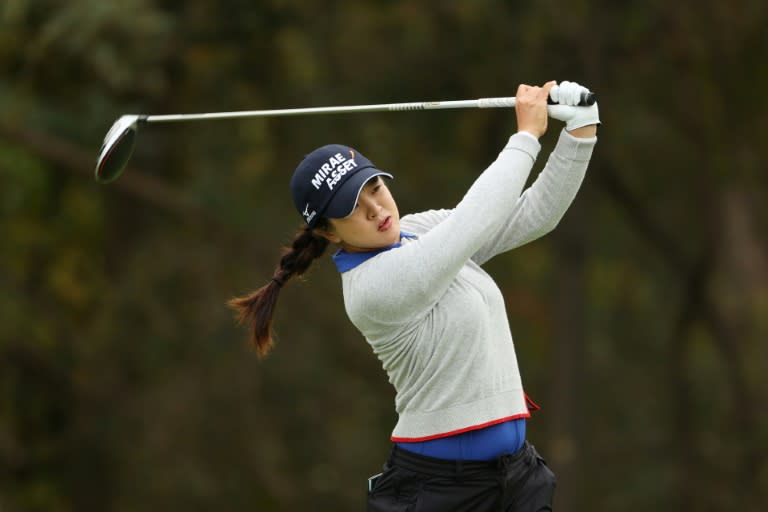 South Korea’s Kim Sei-young, chasing her first major title, fired a three-under par 67 and stretched her lead to two strokes after Saturday’s third round of the Women’s PGA Championship.

The 27-year-old from Seoul, whose most recent of 10 LPGA victories came in last year’s Tour Championship, stood on seven-under 203 after 54 holes at Aronimink in Newtown Square, Pennsylvania.

Kim, who led by a stroke when the day began, made six birdies against three bogeys, lipping out a six-foot par putt off the left edge of the cup at the par-4 18th to miss out on a three-shot advantage entering Sunday’s final round.

Kim birdied the par-4 second and made bogey at the fourth, then answered with three birdies in a row starting at the par-3 fifth. She opened and closed the back nine with bogeys but offset that with birdies at 15 and the par-5 16th.

“On 10, a missed tee shot led to a bogey, but I got my composure back and I’m glad I finished strong,” Kim said. “The last bogey on 18 was disappointing, too.

“I wouldn’t say I’m nervous, but I’m excited about going into the final day. I just want to take each shot at a time and just keep focus, and the results will follow.”

Two-time major winner Nordqvist, who ran off three birdies in a row starting at the sixth hole, bounced over the 18th green on the way to a bogey that dropped her level with Henderson.

“I’m feeling pretty good,” Nordqvist said. “The wind makes it really tough out there and it felt like it was a lot of tucked pins there on the back nine. I hit a lot of good shots and kept my patience up out there.

“I feel like on this course anything can happen, but I’m just happy to be in a good position.”

Henderson, whose lone major win came at the 2016 Women’s PGA, reeled off five birdies in an 11-hole span from the second through the 12th in a bogey-free round to grab a share of second with a 65 after an opening 71.

“Just a little more comfortable on this golf course, knowing it a little bit more,” Henderson said. “I gave myself a lot of looks and made quite a few putts too.

“I made good decisions. I put myself in a good spot so hopefully I have a chance tomorrow.”

“I was pretty calm. I was trying to put up a number to maybe give myself a chance going into tomorrow,” Park said.

“I feel like I played really smart. The course is playing tough but if you play smart around it there is a way to make a birdie.”

Pagdanganan overcame the nerves of her first major start to give herself a chance at a stunning victory.

“This is my first major ever, so I’d be lying if I said I wasn’t nervous,” she said. “I guess it was more of just me being able to embrace my nerves and playing with whatever I have.

“I just enjoyed my last two rounds. I was a little bit more nervous than excited on my first round.”