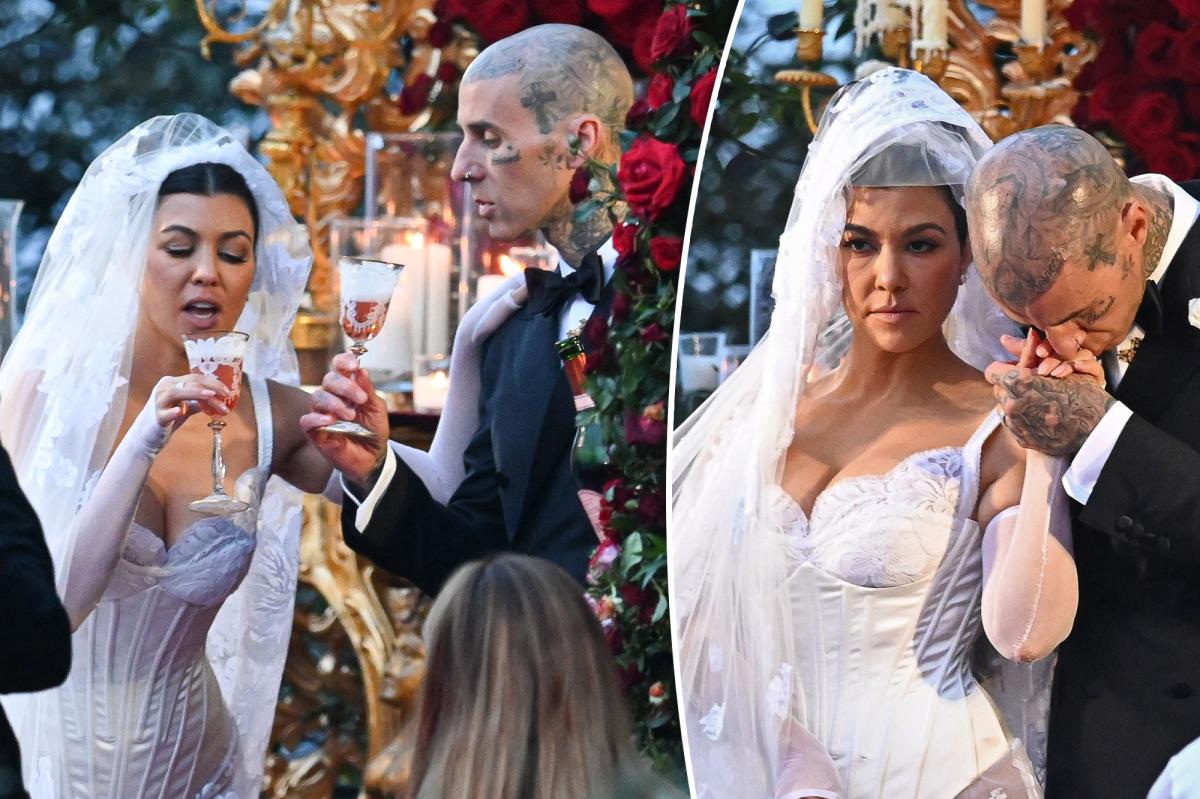 Kourtney Kardashian and Travis Barker married in their third and most lavish wedding ceremony of all, this time at a castle in Portofino, Italy.

The “Kardashians” star, 43, and Blink-182 drummer, 46, said “I do” during a fairytale wedding celebration at Castello Brown on Sunday, one week after they got legally married in Santa Barbara, Calif.

For the intimate spectacle fit for a princess, the bride sported a stunning Dolce & Gabbana mini dress with a massive cathedral veil that required some extra assistance.

She completed the look with glam makeup and a fresh baby pink manicure.

The groom looked equally dapper in a custom black suit by the same Italian luxury fashion house. He teased the look via his Instagram Stories ahead of the ceremony.

Kourtney’s mother, Kris Jenner, and her siblings, Kim Kardashian, Khloé Kardashian, Kendall Jenner and Kylie Jenner, were all in attendance.

The Poosh founder’s children — son Mason, 12, daughter Penelope, 9, and son Reign, 7 — attended the ceremony despite not being present for the couple’s engagement.

Their father, Scott Disick, was not in attendance, as he reportedly did not receive an invite from his ex.

Meanwhile, Barker had son Landon, 18, daughter Alabama, 16, and stepdaughter Atiana De La Hoya, 23, by his side for the big day.

The newlyweds originally “wed” in a fake Las Vegas wedding back in April. After the internet went abuzz with their spontaneous nuptials, Page Six exclusively confirmed the ceremony was just for fun, as they hadn’t obtained a marriage license.

Kourtney confirmed as much the following day with photos and a caption that read, “Practice makes perfect.”

The couple then legally wed at the downtown courthouse in Santa Barbara on May 15. Kourtney’s grandmother, Mary Jo “MJ” Campbell, and Travis’ father, Randy Barker, were present for the nuptials.

For the second ceremony, the reality star wore another short white Dolce & Gabbana dress, while the rocker was in an all-black suit.

“Till death do us part,” she captioned black-and-white photos of the low-key day.

After being friends for over a decade, Travis proposed to Kourtney at Montecito’s Rosewood Miramar Beach hotel in October 2021 following one year of dating.

This marks Kourtney’s first marriage and Travis’ third, as he was previously married to Shanna Moakler from 2004 to 2008 and to Melissa Kennedy from 2001 to 2002.