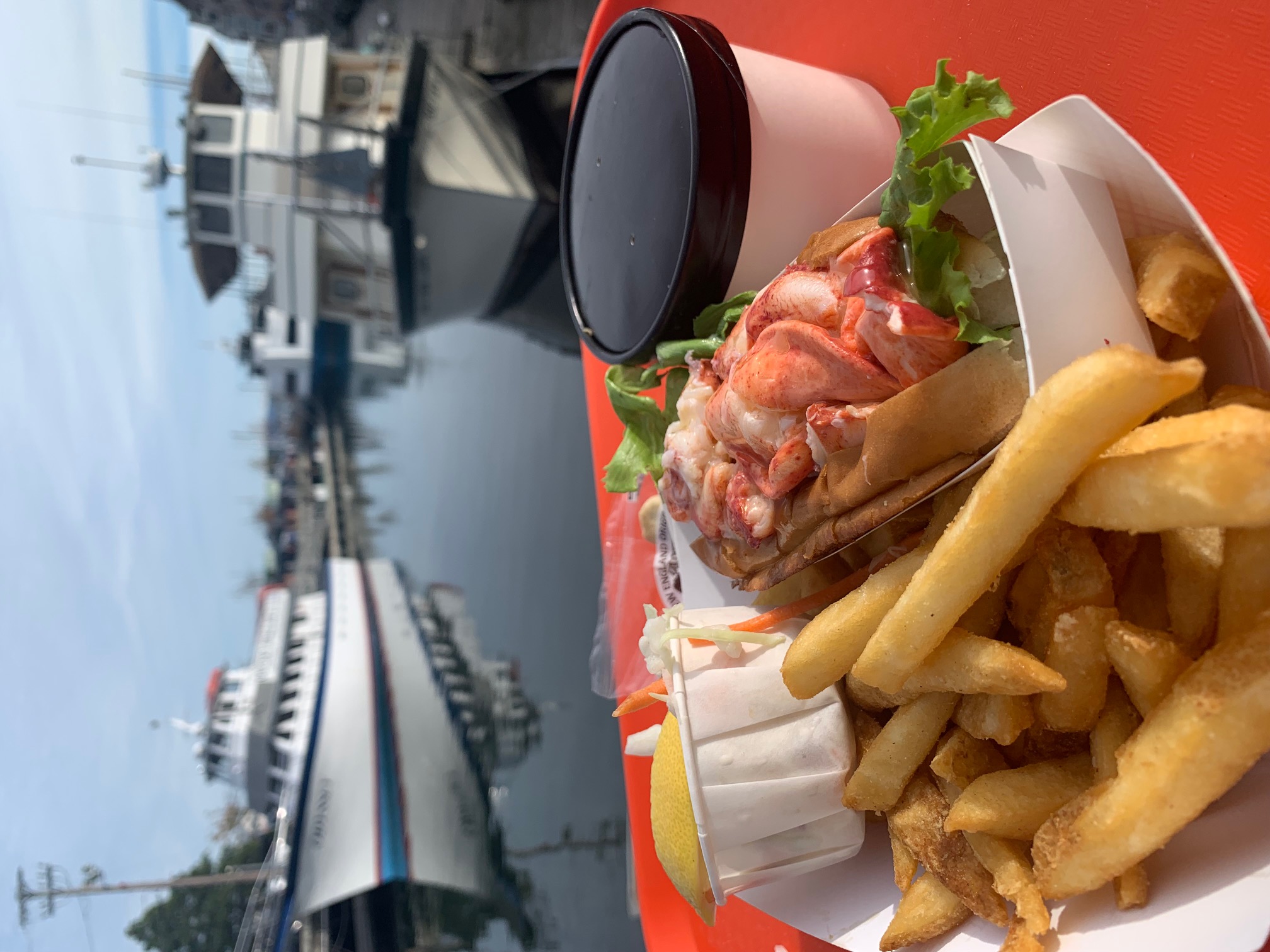 When I headed to Portland, Maine to be part of my cousin’s wedding, I was excited to tack on some extra days to explore the area. Portland has always been on my list. My love of seafood is just understood here. Not only are there what seems like countless lobster dishes, but you get to down a big bowl of hearty lobster bisque or a lobster roll all while taking in the coastal views and stunning lighthouses.

Portland Harbor Hotel
Another great option is the Portland Harbor Hotel (468 Fore St.). Their comfortable, modern rooms and great location make it a perfect place to stay along with great service and much needed amenities. Relaxing with a drink by their outdoor fire pit is a great way to end a long day of exploring Portland’s neighborhoods and lugging around heavy shopping bags.

Portland’s Old Port District is full of bars, restaurants and boutique stores along Exchange and Commercial streets. It’s also home to some of the well-known lighthouses in Portland like the 1791 Portland Head Lighthouse (12 Captain Strout Circle, Cape Elizabeth). Making time to see at least one of the lighthouses around Portland is crucial when heading to Maine.

I’m not one for touristy things, chains, or malls, but I will say that going to Portland without visiting the L.L. Bean Store (95 Main St., Freeport) seems like a crime. It’s not just the store, there’s a giant L.L. Bean boot that you can take a picture with, countless clothing stores and home goods. It’s like they have their own little plaza mall. They even have a restaurant, Linda Bean’s (88 Main St, Freeport), that has really good reviews. I have to admit I was blown away. They had fairly priced lobster dinners, with perfectly cooked lobster. The blueberry chicken wings were incredible, and that’s saying a lot because I’m from Buffalo. The sauce, an ode to Maine blueberries, was delicious.

You can take a day trip out to Boothbay to grab a lobster lunch and check out boutique shops and country stores. I like to find old-school candy shops, and Orne’s Candy Store checked that box. The Boothbay Gimbel & Sons Country Store had some fun trinkets, the Sweet Bay shop had plenty of knickknacks and decor, and the Coastal Maine Popcorn Company had delicious flavors like wasabi soy, rosemary sea salt, juicy pear, orange cranberry and more. Mung Bean was great for handcrafted items.

I had my eye on the Portland Oyster Shop (123 Washington Ave.) by Island Creek Oysters for quite some time. I even have the Island Creek Oysters cookbook, and I’ve been a fan for as long as I can remember. Upon arrival, I ordered an oyster shooter and took a seat to scan over the menu that included a variety of shellfish along with appetizers and dips. (For craft beer fans, they have plenty of local beers on tap.) When you’re ready to order, you just bring your checklist to the front with which kind of oysters you want, and how many. They shuck them fresh, served on a bed of ice with a lemon wedge. They also have other items like anchovy toast and fresh crudo. When eating shucked oysters, you want to makes sure the liquor inside is crystal clear, a telltale sign that the oysters are extremely fresh. And they were. I highly recommend this place.

Where do I start with the Portland Lobster Co. (180 Commercial St.)? It looks like a small whitewashed shack, but those always seem to be the best places. You stand in line to place your order at the register and when your number is called you get a plastic tray with your food. I ordered a buttery hot lobster roll along with a cup of lobster stew. While you wait, you can grab some Maine Root blueberry pop and grab a table. When my number was called, I grabbed my tray and dug in. Tons of fresh lobster meat glistening with warm butter loaded the roll, but it wasn’t soggy (a key element). I went to take the first bite of my lobster stew and pulled out a huge chunk of lobster meat right away. Everything was incredible.

I love a good doughnut shop and I knew that The Holy Donut (7 Exchange St.) needed to be added to my list of places to eat in Portland. They’ve gained national recognition because of a secret ingredient: local potatoes. According to their website, they discovered that adding soft mashed potatoes gives the doughnuts an edge and keeps them from drying out. They have amazing flavors like fresh lemon with hand-squeezed lemon juice and zest; maple; coffee brandy; bacon cheddar-filled doughnuts and more. I suggest getting a box to try a taste of a few different flavors.

Jessica Kelly is a food and travel writer from Buffalo. @adventures.are.waiting