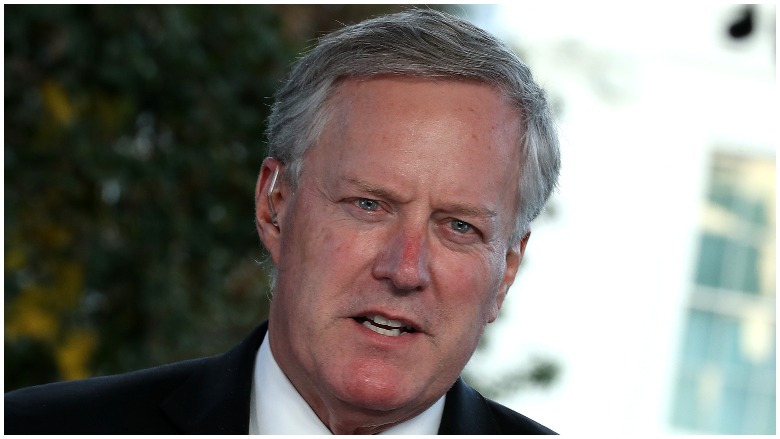 At a time when many couples are being forced to postpone their weddings to abide by state guidelines banning large gatherings and out of concern for their elderly relatives being exposed to the coronavirus, the Atlanta Journal-Constitution reported that White House Chief of Staff Mark Meadows threw a “lavish” wedding party for his daughter in Atlanta.

The wedding was held in spite of the governor of Georgia’s executive order which required people in gathering in groups of 10 to maintaining six feet of distance at all times. The Constitution also reported that the event violated a mayorally issued 9 p.m. curfew.

The details of this story are so damning. So many Americans postponed or reenvisioned major life events—but Mark Meadows, rather than share that sacrifice, just did what he wanted. The # of bridesmaids *alone* exceeded the state’s group-gathering rules. https://t.co/forsUJy0DN

According to the Atlanta Journal-Constitution, the wedding for Meadows’ daughter, Haley, was held at the Biltmore Ballroom and featured 70 guests. The Constitution reported that the wedding featured “crystal chandeliers, marble floors and a frame of soaring Roman arches.”

However, one item — masks — was conspicuously missing.

According to what the event’s wedding photographer =told The New York Times, most guests were not wearing masks. “Vendors wore masks and so did some of the guests off and on when they wanted to,” Mike Moon said.

Here is how the Constitution described reports of the wedding:

The Times reported that online photo albums showing no one wearing masks at the event have since been taken down.

Other workers reported being upset about the event, the Constitution reported. Michael Ward and his brother, Ted, who were both caterers, both described feeling as though the event was elitist and said guests stayed after 9 p.m. “It was a situation where I felt like this was the elites who were having their way,” Michael Ward said. “They do one thing and they tell us to do something else. It was that kind of feeling. They were being a bunch of liars and hypocrites.”

“It was a very large gathering, and not one person in the entire party had a mask,” Ward’s brother, Ted said. “I felt insulted that I was asked to be wearing a mask and others weren’t, and they were openly flaunting rules set by the administration.”

Myrna Antar, the president of the firm which manages the Biltmore hotel’s events, Novare Events, issued a statement that was included in the Constitution’s report. It read, in part, “While we do not comment on client’s events, we can confirm that the entire 16,000 square feet of the space was reserved for this small wedding — greatly exceeding the per person square footage allowed by the order.”

Bottoms said the wedding “(made) a mockery” of the pandemic and those who had died, according to the Constitution. “It was a complete disregard of what we’ve asked people to do in our city and in our state at that time,” the mayor said of the lack of mask-wearing.

Meadows has declined to comment on his attendance at the wedding and the lack of masks present.

At the Time of Meadows’ Wedding, the Governor Had Banned Gatherings of More Than 10 People

I encourage all Georgians to continue to maintain social distancing, limit their travel, and use best practices. Gatherings of more than 10 people will not be allowed unless it is possible to maintain 6 feet of distance. Read the new Executive Order: https://t.co/foH4Y5kA4H pic.twitter.com/n5k5ihC2df

From photos of the wedding (one can be seen in the headline of The New York Times story), it appears that the ban on gatherings of more than 10 people without adequate social distancing was not followed.

The 9 p.m. curfew which had been issued in response to unrest in the city of Atlanta, according to the Atlanta Journal-Constitution, was also not followed. Moreover, Meadows and guests also appeared to have ignored state advice regarding mask-wearing.

Georgia’s governor, Brian Kemp — who has butted heads with Atlanta Mayor Keisha Lance Bottoms over how to handle coronavirus — said of masks, “If you’re wearing a mask, you’re protecting other people. Not everybody’s doing that. We’re asking them to do that,” Atlanta public radio station WABE 90.1 FM reported.

Meadows told members of the press corp in September that he didn’t think wearing masks was worthwhile because they were not 100% effective against the prevention, contraction or spread of coronavirus, as The Washington Post reported:

If masks is the panacea for everything, that we could have everybody going back to work if they’ll just wear a mask … if that’s the way that we open back our economy and get everybody back to work, I will gladly wear my mask each and every day if that’s what makes the difference. And it doesn’t.

I think even a (Centers for Disease Control and Prevention Director Robert) Redfield, a (coronavirus task force member Anthony) Fauci and anybody else would suggest that it is a mitigating effort, but it’s not something that is actually designed to actually make sure we don’t have the coronavirus spread.

When asked about unrelated images of dozens of average Georgians gathering in public parks, State Public Health Commissioner Kathleen Toomey described the images as “disappointing,” according to local TV station WSB-TV. “It’s disappointing because I feel that individuals, particularly the young people, may think they are not at risk, that they’re vulnerable but they’re going home to their parents and grandparents,” she said.

READ NEXT: Stimulus Checks 2: McConnell Says a Package Is Not Likely This Month